Agility is essential in a business world where supply chains may be big and messy, and at the mercy of unforeseen events

In an ideal world, supply chain management would be a simple science, where demand was stable and predictable, resources and skills were plentiful, prices flat. Sadly, this is not how manufacturing works.

In reality, volatile global demand plays havoc with delivery. In the highly competitive mobile telecommunications market, lead times for handsets can vary significantly even between models of the same smartphone brand. For instance, Apple customers might be waiting anything between three days and three weeks depending on which iPhone they have ordered.

In the automotive industry, delays can run as long as a whole year. UK buying platform carwow has estimated the average factory order time for a new car to be 13 weeks, with the quickest being the Toyota Auris at two weeks, but the Mercedes GL one of the slowest at around 52 weeks.

The whims of today’s on-demand consumer society and rise of mass-customisation mean responsiveness and adaptability are critical service attributes for business success. Agility is key. However, this agility drive applies to the whole supply chain as requirements do not simply start and stop at any one factory gate.

Agility is a team game now, argues Professor Yahaya Yusuf, director of the Institute of Logistics and Operations Management at the University of Central Lancashire. “As competition is increasingly between supply chains rather than organisations, how well organisations respond to customer needs is not only determined by internal capabilities, but also by the capabilities of their suppliers and their suppliers’ suppliers,” he says.

With tens of thousands of suppliers jumbled together in convoluted contracting arrangements, operating ever-shorter schedules, supply chains of major brands tend to be big, messy and fast moving. Faced with this deadly cocktail of scale, complexity and speed, digital is the only option, but not the only answer, explains chief executive and founder of 2degrees, Martin Chilcott.

“The future for supply chain agility is what we call ‘fully linked collaboration’. This means large-scale supplier-to-supplier collaboration, with operational managers from different organisations working together to solve problems, share best practice and find solutions. Digital tools now make this possible,” he says.

“However, agility is not just a matter of new technology. We need a new mindset, too. We must step away from the very limited command-and-control approach used in the past and adopt a more open, collaborative culture. Agility in the 21st century calls for a vision of the supply base as an ecosystem to be supported, rather than merely a chain to command.”

He says: “Supply chain mapping is vital to business resilience and agility. If you don’t know where your suppliers are located, how do you know whether you might be exposed by an extreme event, be that a terror attack, ash cloud, tsunami or military uprising?”

With cloud-based IT solutions to manage and map in real time, modern intelligence capabilities become highly sophisticated. VisiChain software, for example, powered by Segura for Construction and employed by Responsible Solutions, utilises GPS-linked supplier data cross-referenced with newsfeeds from global media agencies such as Reuters.

News events trigger automatic locational alerts, acting like early-warning systems for client agility, says Mr Nicholson. “Supply chain mapping enables you to have contingency plans developed and, as soon as news breaks, identify what suppliers you have in the affected area and respond accordingly,” he says.

“A clear carbon reduction strategy as part of procurement planning creates a diverse and agile supply chain. With the right planning in place, customers realise an increase in efficiencies and cost-savings by simple techniques and changes in behaviour. This in turn impacts supply chains, ensuring the agility to keep carbon reduction on their procurement agenda,” she says.

UK construction and regeneration firm Morgan Sindall Group has halved its carbon footprint over six years with help from its supply chain. Certified by the Achilles Carbon Emissions Management and Reduction Scheme, verified data showing a 54 per cent reduction is important for quantifying the group’s contribution to both the UK government’s construction strategy and commitment to cut carbon emissions by 80 per cent up to 2050.

Tackling resilience, responsiveness and risk, collectively and sustainably, constitutes the hallmark of this new agility mindset. It is supply chain management for a less than ideal world. 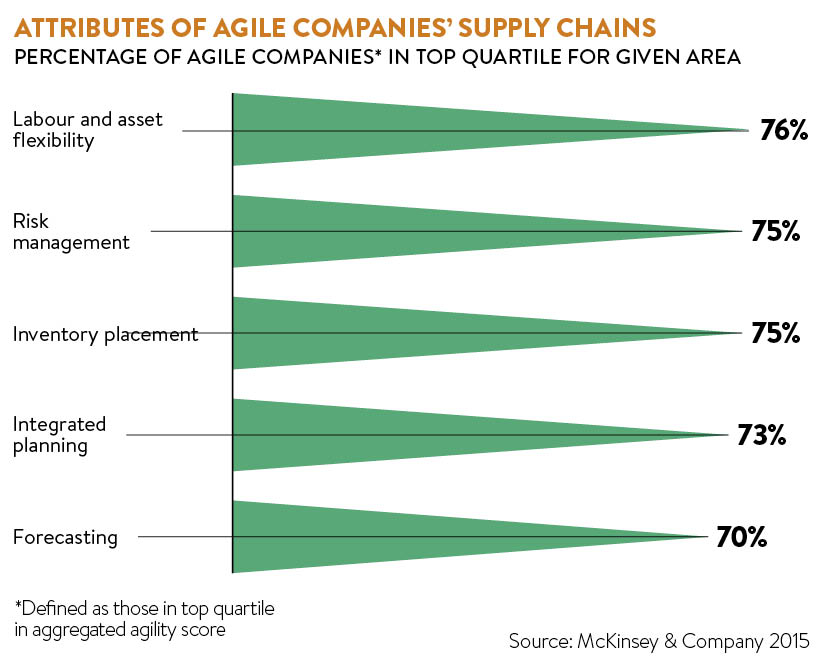 Can you really have too much of a good thing? Well, if it all arrives at once, the supply chain answer might be “yes”.

In April, American all-electric vehicle manufacturer Tesla Motors announced receipt of more than 325,000 reservations for its Model 3 car, due for release in 2017. That is a lot of pre-orders by any standards, but Tesla had actually taken them within just seven days, in a record-busting feat described as “the single biggest one-week launch of any product ever”. 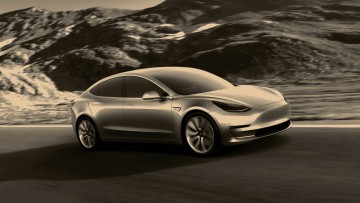 The figures equate to $14 billion in future business and to put them in perspective, the world’s original all-electric car, the Nissan LEAF, did well to reach sales of just 200,000 by its fifth anniversary.

So, is it just a public relations stunt, a stock market accident waiting to happen or can Tesla deliver? There are some serious doubts, not least because end-of-decade production ambitions for 500,000 cars a year contrast sharply with 2015 output of little over 50,000 vehicles.

Furthermore, Tesla alone would require the entire current worldwide production of lithium ion batteries. However, here the company has taken bold action, investing with Panasonic in the Gigafactory to support and drive demand. This vast manufacturing facility in the Nevada desert will ultimately cover more than 100 football fields in area and begin producing low-cost batteries from 2017.

At this point, Tesla’s prospects of success remain in the balance, concludes fellow disruptor and founder of Welsh hydrogen fuel-cell car manufacturer Riversimple, Hugo Spowers. “Tesla have done a brilliant job, furthering the cause of new entrants and of battery electric cars,” he says. “The barriers to a mainstream strategy are so significant it is probably necessary to stimulate media hype, but it is a vicious circle in that expectations will inevitably exacerbate the myriad challenges.”