Advances in automation, robotics and software engineering technologies are eliminating demand for large teams of low-skilled, relatively inexperienced workers based in remote places.

Instead the focus for UK businesses will be on sourcing the right mix of next-generation skills across a range of business processes from a global talent pool and many are finding what they need much closer to home.

The result has been an increase in the nearshoring of business processes to the Continent, where there is a wealth of expertise in areas such as IT, engineering, automotive and big data, plus the benefits of a close cultural connectivity, within convenient time zones, to the UK. 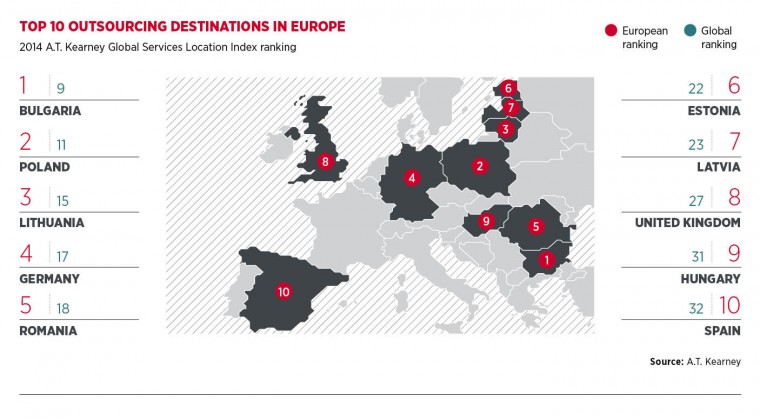 And it is not just IT skills that are being sourced through nearshoring. Human resources, finance, sales and customer service functions are also on the move.

According to Mark Craddock, global business services director at Deloitte, it is Eastern European countries, particularly Poland and Romania, which are likely to benefit the most from Western European companies’ outsourcing initiatives.

Balancing cost-savings with other benefits, such as access to skills, greater speed to market or improved control over the supply chain, are important variables to consider

“This is because workers here are often highly skilled, have much lower wage costs and are just a short, cheap flight away with no travel restrictions when there’s a need to bring teams together,” he says.

The benefits of nearshoring

AlixPartners director Phil Jones says: “In our experience, the primary factor driving nearshoring decisions remains the potential for cost-savings. However, there are a number of other factors that play a large part in evaluating which country to outsource to and whether to nearshore or ‘farshore’. Balancing cost-savings with other benefits, such as access to skills, greater speed to market or improved control over the supply chain, are important variables to consider.”

The benefits of nearshoring include reduced total landed costs, incorporating labour and freight costs, as well as improved speed to market and control over the supply chain, and better control over intellectual property. 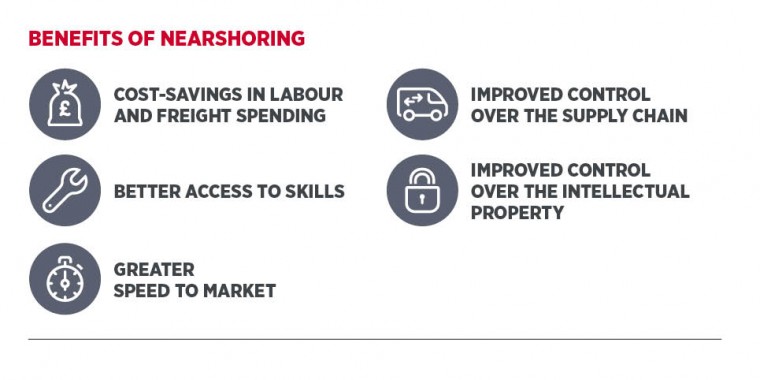 A shorter supply chain can enable more flexibility, reduced inventory and with that better customer services, while the time zone benefits of nearshoring make it easier to manage offshore operations and facilitate communications between parts of the business in terms of both time and language.

“Businesses are increasingly being challenged to respond to faster and more dynamic consumer and corporate environments, and nearshoring manufacturing and production facilities can prove useful in meeting demands,” says Mr Jones.

For the UK, the closest and most desirable nearshoring market is Central and Eastern Europe (CEE), with a diverse assembly of nation states, including the Baltics, Poland, the Czech and Slovak Republics, Bulgaria and Romania, and their emerging economies.

The rise of CEE as an outsourcing destination of choice is evident in the number of businesses moving more of their operations there, says Daniel Olsson, head of operations at IT outsourcing specialist Soitron UK.

Sabre and Motorola both now have significant nearshored software development centres in Poland, while firms such as Comarch, Capgemini and HCL have growing footprints there in the IT consulting field. Meanwhile, IT and business process providers Accenture, Capgemini, Genpact, Luxoft and Wipro have bases in Romania.

Mr Olsson says: “CEE is definitely ‘happening’ as a place for IT development, consulting and other forms of work that may traditionally have been the province of an India or a Philippines. But it is something of an artificial denomination, too. There are big differences in a Turkey and an Estonia, differences that the potential UK outsourcing customer will want to be aware of before they go down this route.”

Poland’s stable economic situation, tax incentives and close cultural affinity with the UK make it an attractive nearshoring destination. Even more valuable is its wealth of tech talent, which has led some of the world’s biggest tech companies, including Microsoft and Google, to build outsource centres there.

Baltic states, such as Lithuania, also rich in technology talent, offer another alternative to offshoring. It is where Farida Gibbs, chief executive of UK-based recruitment firm Gibbs S3, has established an IT training centre to help train and educate a new generation of IT workers, who can then be engaged by British companies to meet demand more flexibly.

She says: “We saw that there were a large number of skilled people, who could potentially add great value to businesses, but who were being underused. Companies are now getting excellent results from qualified developers and also have peace of mind around issues such as intellectual property protection and fraud. The companies we work with are quickly coming to see the Lithuanian centre as their shared services provider.”

In Western Europe, Portugal is emerging as a place where UK firms are operating part of their business, particularly in IT and software development.

Matthew Carrozo, head of marketing at Lisbon-based recruitment platform Landing.jobs, says: “The technical quality of the workforce coming out of highly ranked universities, their aptitude for English, which is on a par with the foreign speakers of Nordic countries, and their comparatively lower wages make Portugal incredibly attractive for nearshoring investment.

“This access to skilled talent is allowing home-grown and foreign companies alike to have front-of-house brand, marketing and customer service operations in the UK, and large teams of developers in Portugal, as is the case with Chic by Choice, Seedrs and Uniplaces.”

Nearshoring is not without its challenges, including cultural and language barriers in some of the countries on the eastern fringes of CEE. A decision to nearshore business processes has to factor in issues such as the capability and flexibility of suppliers and the local workforce, and the long-term sustainability of their current capacities.

As the labour cost gap between Europe and the Far East continues to close, and demands for speed and flexibility rise, nearshoring will present a viable solution for many UK firms

Nor is it a complete substitute for farshoring, as Mark Devonshire, vice president, infrastructure services UK, at Capgemini UK explains.

“Over the last ten years, large companies have moved away from viewing onshoring, offshoring and nearshoring as separate entities, and are instead focusing their efforts on making sure IT services are based in locations that will ensure the best possible service delivery, a process known as rightshoring,” he says. “Increasingly, however, we are seeing nearshoring play a more important role within this model.”

And as the labour cost gap between Europe and the Far East continues to close, and demands for speed and flexibility rise, nearshoring will present a viable solution for many UK firms.

Deloitte’s Mr Craddock concludes: “While India and other low-cost locations will remain an important component for global multinationals, the future back office for a European business could potentially be a combination of software robots and staff based in the likes of Krakow and Cluj.” 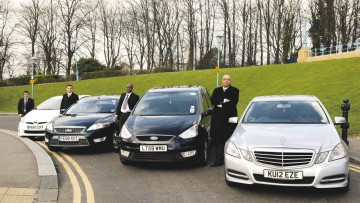 Minicab price comparison and booking app Kabbee has parts of its software and technology development team nearshored in Ukraine, and all its quality assurance operations based in Kiev.

Co-founder and chief technology officer Marcio Marinho, who manages the team in Ukraine, says: “We started nearshoring in February 2014 for two main reasons – to reduce development costs and facilitate the recruitment process, as our offshoring partners do all the profile search and hiring based on the roles we need. We just validate their choices. Unlike headhunting agencies, this is included in the offshoring costs.”

The main challenges for Kabbee have included communication and a lack of proficiency in English, for which the company has provided intensive English lessons. Team members not being in one location has also proved problematic.

“Detailed briefs, requirements and plentiful discussions around work before starting the tasks helps to mitigate some of these issues,” says Mr Marinho.

Nearshoring the development processes has enabled Kabbee to create a larger and more affordable team, and combine both local and nearshore resources and skills to deliver the best of both worlds for the business.

“We take a logical approach with the more management-oriented roles in London where they can interact with other departments, such as product, marketing and the more execution-specific roles nearshore, so bigger teams can get work done at a faster pace,” he adds.