Modular homes are the future of UK housing

The column inches written about the dysfunctional British housing market are legion. Too few homes, at too high a price, built for too few people. Two years ago, the Farmer Report commissioned by the Government concluded that the British construction industry, using a medical analogy, was a dying patient.

Fast forward to today, it still lies on its sick bed, failing to change at a scale necessary to answer the UK housing crisis, boost productivity or innovate quick enough. The collapse of Carillion proves how fragile major contractors can be. Mark Farmer said at one event late last year that the industry: “is standing on a burning platform and all other options have gone. It simply has to change.”

There’s one option, which could be a reviving shot in the arm for this ailing industry, and that’s modular construction. Rather than lay bricks and pour concrete on-site, sections can be manufactured in a factory, shipped to their destination and then bolted together for final assembly. The finished product can look very similar to existing buildings, yet 80 per cent of the work is done off-site.

This offers a new way of delivering more buildings, faster and of better quality, including homes, schools, hospitals or prisons. In his Autumn Budget, the Chancellor Philip Hammond said the state will use its purchasing power to drive the adoption of this technology come 2019, whether it be through the Ministry of Transport, Justice, Health, Education or Defence.

This offers a new way of delivering more buildings, faster and of better quality

“We cannot deliver the infrastructure we need with the model we have today, there just isn’t enough capacity,” explains Kenny Ingram, global industry director for IFS. “It’s the reason why the government mentions modular homes in every second sentence at the moment, it doesn’t help that there are labour and skills shortages as well.”

Many industry players including Mace, Laing O’Rourke and Mott MacDonald support offsite manufacturing, so do others such as Kier, NG Bailey, Sverfield and Arup, all extolling the benefits of so-called construction integrated manufacturing, or design for manufacture.

“We are looking at the biggest change in 100 years,” states Mr Ingram, whose company develops and delivers enterprise software for customers, globally. “It’s been talked about for a long-time, but now there’s real momentum and we’ve seen a greater number of companies come and talk to us about this.”

The UK construction industry is slow at moving into the 21st Century, adopting new technologies and changing its business processes, including the use of digital design tools, such as building information modelling  (BIM). Productivity has barely budged in 25 years, in manufacturing it’s doubled in this time.

The government wants 300,000 homes a year built by 2025, at the moment the sector can only deliver 190,000. The UK now lags behind Sweden, Germany and the Netherlands when it comes to the merger of manufacturing and construction, while in Japan more than 15 per cent of a million or so new homes constructed each year are, to some extent, prefabricated. 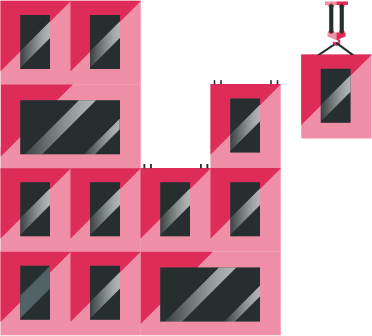 The many benefits of modular homes

There’s also a perfect storm brewing in this sector with an ageing workforce, a lack of new entrants and growing restrictions on free movement of labour, think Brexit, as well as a structural decline. There were 12,000 small housebuilders in 1988 accounting for one in four homes, by 2017 this had dropped to 2,500 responsible for just 12 per cent of new builds .

“There are lots of cultural barriers to change. The big driver is the housing market and the current crisis. This will force the issue. We are going to have to build more and companies are going to have to release land and land banks to relieve the pressure or build houses on them affordably. There is a sheer weight of demand,” states Mr Ingram.

“The market is now catching up. There are benefits to building modular homes, 50 per cent reduction in time, lower labour costs, less materials, which means lower overall costs. There are now quite a few factories where these modular homes can be built.”

However, investing in offsite manufacturing from the construction industry is still in a very early stage. Capital costs are high. Many top tier companies don’t know what their strategy is or should be. The government is pushing modular construction, and digital solutions like BIM, but is yet to mandate on it.

“The issue is getting people to realise there is an issue at all. Many construction firms are entrepreneurial and privately run. They started as one-man bands. Getting them to change is challenging. However, the fact that they are entrepreneurial means they can turn on a knife-edge quickly and invest if they have to,” decries Mr Ingram.

Amongst industry players there’s widespread agreement that if the government legislated on modular manufacture creating a solid pipeline of work there would be a drive to invest in factories that could churn out the buildings and infrastructure of the future.

“The government will force the issue in time. The issue is that the construction industry is still working on the same platforms as it ever has. Many companies don’t know how to manufacture. Shipping and logistics will also be part of this new picture. Many traditional firms just don’t have business systems that support these capabilities,” says Mr Ingram.

“We have solutions that works with construction, manufacturing and logistics. That’s why people are listening to us. The fact is the disruption will come, maybe not from construction, but from other sectors. Insurance companies, manufacturers, even Amazon are looking into this.”

The fact is the disruption will come, maybe not from construction, but from other sectors. Insurance companies, manufacturers, even Amazon are looking into this

Other sectors of the economy have been disrupted by tech-driven solutions from transport (Tesla), to accommodation (Airbnb), construction could be next. It doesn’t have to be from a domestic player either, with modular manufacturing, competition is global, since flat-pack housing can be produced in Sheffield or Shanghai.

“We began investing in construction 20 years ago and in parallel have a strong capability in manufacturing. It is a no brainer to bring the two together and offer the best of both worlds,” states Mr Ingram. “Now expect to see huge change around the corner.”