When it comes to developing the mobile apps that employees need to get work done, corporate IT teams are short of time, short of money and short of skills. As a result, many struggle to keep up with workers’ seemingly insatiable demand for these apps.

In a recent survey of 228 application development managers at US and UK companies, conducted by pollsters Opinion Matters on behalf of rapid application delivery specialist Outsystems, almost nine out of ten respondents (85 per cent) said their organisation faced a backlog of between one and twenty mobile apps. In 50 per cent of cases, the backlog was between ten and twenty apps.

That’s simply not a strategy for success in the so-called “application economy”. The term is used by technology industry watchers to describe a business environment in which applications, particularly mobile ones, play a big part in helping companies to make money and cut costs. To be truly competitive, they say, every business needs to become a software business, adept at building mobile apps that employees and customers love to use.

The trouble is that few internal IT teams are accustomed to thinking or working this way, says Joe Baguley, Europe, Middle East and Africa chief technology officer at software company VMware. For the most part, he says, they tend to take a “device-centric” view of mobility, focusing primarily on managing laptops, tablets and smartphones.

To be truly competitive, every business needs to become a software business, adept at building mobile apps that employees and customers love to use

Today, a very different perspective is required. “Companies need to manage the user’s mobile experience,” says Mr Baguley. “They need to take an app-centric view that focuses on delivering applications and data to users in ways they find useful and engaging.”

Without that view, however, IT teams could find themselves cut out of the mobile app conversation completely, says Cathal McGloin, chief executive of mobile app development platform company FeedHenry.

“There’s huge pressure on IT teams, because at most businesses, there are so many ideas for mobile apps. But if IT isn’t seen to be putting those ideas into practice, with a clear strategy on mobile apps, individual departments and teams inside the business are likely to take matters into their own hands, and develop the apps they need themselves, or pay someone else to do so,” he says.

So what’s the answer to the mobile app bottleneck? For some, it’s the adoption of agile software development, a project management methodology that emphasises teamwork, frequent adaptation in response to requirement changes and close alignment of the project with end-user needs.

At utility company British Gas, chief information officer David Cooper is a keen proponent of agile. “For me, mobile is all about getting an app into the hands of the user, getting their feedback, and accepting that the application economy is going to mean a constant stream of patches and improvements to that app. Don’t try and hone an app to perfection before you release it,” he advises.

Many companies are using mobile app development platforms to speed the process of releasing and updating mobile apps. These platforms don’t just provide software developers with a cloud-based venue in which to build and run new mobile apps, they also actively address those irksome shortfalls in time, money and skills.

They do this by providing developers with templates for apps, pre-built code for features and automated tools for time-consuming processes, such as testing and debugging. They speed the development of back-end integration links and encourage the reuse of code to perform specific, commonplace functions, so it can be used in different apps.

Business services company Rentokil Initial, for example, is using a mobile app development platform from Kony to provide some 7,000 technicians worldwide with the apps they need when they’re performing pest control, cleaning and laundry services at client sites.

“We need to deploy mobile apps in weeks, not months, and we need to roll them out in many different markets,” says Anthony Meadows, Rentokil Initial’s director of enterprise delivery. “By using Kony, we’re hoping we can more quickly deliver a wide range of mobile apps, across different mobile platforms, to employees performing a wide range of different tasks in different areas of the world. That’s a big challenge for us, but also a big opportunity.”

In fact, for many companies, it’s too big an opportunity to entrust to a third-party software development company. They prefer to keep mobile app development in-house, according to a recent survey conducted by software company CA Technologies. It found that, in the past four years, the proportion of companies happy to rely on a specialist third party for mobile apps had dropped from 44 to 33 per cent.

That’s because, in the application economy, mobile apps now take a centre-stage role in business strategies, says CA Technologies’ chief technology officer for Europe, Bjarne Rasmussen. “Mobile apps are now key channels for interactions with employees and customers,” he says. “If a company doesn’t get a good handle on application development, it will quickly lose competitive advantage.” 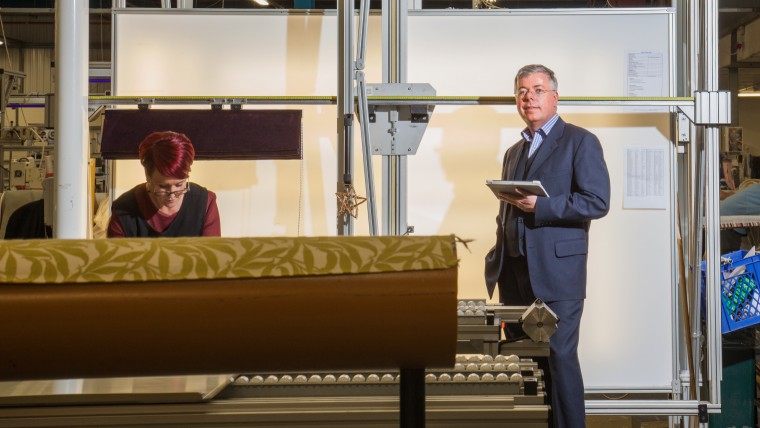 Getting exactly the right blinds, curtains or shutters to suit your home can be a fraught affair which is why customers of Hillarys Blinds typically rely on an in-home visit from one of the company’s sales advisers, not just for expert measurement and fitting services, but also for design advice and inspiration. The company’s 1,000 advisers make, on average, 10,000 home visits every week.

For almost a decade, they have relied on a mobile app called Sam (Sales Advisor Mobility) to take customers through their options when it comes to fabrics, colours and accessories, to check inventory and to process their orders. But last year, a major overhaul was required, according to Julian Bond, head of IT.

“The world of mobile technologies had changed so much since our first-generation app went live in 2005 that we were facing a very real risk of obsolescence,” he says. “We decided to develop a second-generation app from the ground up, on a new operating system, but to do it in-house, so that we remain in control of maintenance and future app development.”

This new app, named Samson, was developed in under six months using software company SAP’s Mobile Platform and runs on Samsung Galaxy smartphones and tablets. While it draws heavily on the first-generation app to make life easier for existing sales advisers, says Mr Bond, the app has been radically redesigned and streamlined to make it easy to use for new recruits, too.

More importantly, it integrates closely with Hillarys Blinds’ back-end SAP systems for enterprise resource planning and customer relationship management, so that advisers always have the most up-to-date information on customers, orders and product availability.

Samson has been a big hit with sales advisers, according to Mr Bond. The end result: an additional £2 million to £3 million in sales every year. “With Samson, sales advisers can be more productive than ever before, attend more appointments and make more sales. That’s good for them, good for customers and good for the whole company,” he says.