When the Americas Cup comes to Portsmouth next month, British hopes rest with Sir Ben Ainslie’s racing team. It will spring into action from a former boat-stacking area that has been emptied of its normal occupants. But the owner of this displaced business has no objection. Its vessels will all be securely shelved in three-storey-high steel racks tailor-made for small boat storage.

The company that came up with this innovative approach to dry-docking is Wickens Engineering, a family-owned Worcester firm that produces industrial racking for a range of uses. Wickens is expanding into new sectors, while squeezing the maximum efficiency out of its factory, and a big technology trend is helping it do this. 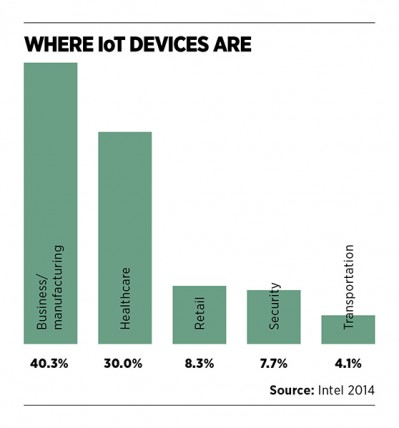 The internet of things (IoT) has been touted as a miracle cure for multiple business ailments. Just attaching a computer chip to every item that passes through an assembly line is somehow supposed to transform manufacturing. But the incessant hype conceals a basic truth. Technology is sometimes most fruitful when it is applied with a light touch and used to solve very basic questions. Wickens Engineering is a great example of this.

Putting heavy-duty racking together involves a series of expensive machines, including top-of-the-range industrial robots. But this process can still be undermined by bottlenecks that appear when one single machine is not working at high capacity. Enter the Warwick Manufacturing Group (WMG), which works out of Warwick University and intervenes to boost businesses with its specialist skills.

Using an ultrasound scanner, working on the same principle as a pregnancy monitor, WMG is able to measure precisely when a cutting machine is busy or idle. This in turn gives Wickens an exact idea of how many more steel rails it could cut in a day and should eliminate any downtime. And attached to the scanner via a wireless internet connection is a Raspberry Pi, a cheap device built to teach schoolchildren how to write computer code.

WMG’s Piero Filippin chose this austere set-up because it was “very, very cheap, and simpler and more reliable than a normal PC”. When the Raspberry Pi is plugged into a computer screen it presents its findings as a conventional spreadsheet. “The idea is not to involve an IT department,” says Mr Filippin. 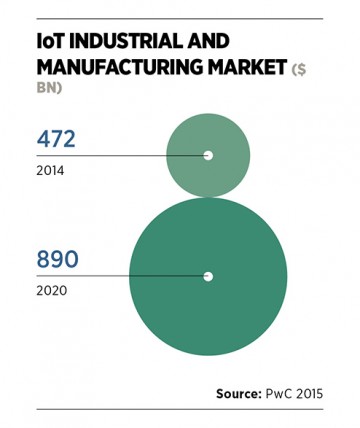 Keeping the more intense aspects of high technology at arm’s length suits Steve Wickens, who runs the business his father founded 40 years ago. For the Wickens’ managing director, the IoT is merely a phrase beloved of technology fanatics. “All I want is to measure the efficiency of my key machines,” he says, and the internet-of-things approach has allowed him to work out how to dovetail older equipment with state-of-the-art kit. Maximising the efficiency of every machine is only possible if you know exactly how it is running.

Exception EMS is a British manufacturer of specialised electronic components for the aerospace, and oil and gas sectors. Quality is what keeps Exception in business. It has linked up what technical director Adam White calls a “simple old test machine” to a scanner used by staff who pack the firm’s circuit boards into boxes for shipping out.

Using fairly basic software and a wireless internet connection, Exception EMS has armed the box packers with an alert that flashes up on the scanner if any of the parts have failed a previous quality check. This error-proofing has seen the number of returned products cut by half and is part of a wider connectivity project that links an increasing proportion of the machines at its Wiltshire factory.

Mr White thinks the whole IoT bandwagon has got out of control. “People make this out to be amazing, but for me it’s just the evolution of connected devices,” he says.

He has a point. Computer chips with a radio transmitter for unique identification have been allowing companies to track goods for decades. What has changed is these tags are now so cheap they can be pasted on to just about anything, while wireless connections and the computers that display their output have become extremely cheap. The IoT is as much about the proliferation of these technologies as it is about any big idea. 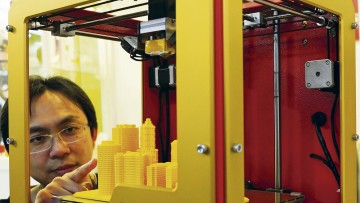 At US industrial conglomerate General Electric, the internet of things (IoT) is being adopted, and adapted, on a truly grand scale. The GE empire spans 400 factories worldwide and they are all being plumbed in to what the company terms the “industrial internet”. Marco Annunziata, GE’s chief economist, explains this in terms of an ambition to collect information on everything that happens on the factory floor.

Embracing the new world of 3D printing, where prototypes of new parts or products can be made in minutes, the industrial internet allows ideas and information to flow around a plant, and should speed up every aspect of production.

Embedded sensors in GE products, such as aero-engines, feedback information on performance and maintenance needs. This is shared online with GE’s design teams, giving them an instantaneous insight into which parts may benefit from redesigning.

It’s all part of exploiting information in a way that was not economic before the advent of cloud computing made storing and analysing massive amounts of data a practical proposition. For Mr Annunziata, the IoT is about capturing as much information as possible and then crunching it to light up different aspects of the manufacturing process.

GE wants to extend its control of the shopfloor through an online world called Predix. This is a software shell written by GE to hold and run special applications created for its industrial internet. And Predix will fuel what GE calls its “Brilliant Factory”. Stephan Biller, GE’s chief technology officer in manufacturing, points to the company’s gas turbine plant at Greenville in South Carolina as a shining example of such brilliance.

Data flows around the plant from machines and chipped identification tags giving managers an instant picture of every metric. Energy use, parts throughput and every other activity within the Greenville site are monitored to produce better quality turbines that are delivered on time.

This latter aspect of web-powered industry can get forgotten in the noise around the IoT. The enormous effort that goes into connecting innumerable industrial devices is all about giving the customer a reason to come back and order from that source again. Whatever snappy slogan it appears under, the IoT is about connecting manufacturers to their customers in a way that has never been possible before.