Vice president of Workplace by Facebook, Julien Codorniou, tells how communicating at work is changing 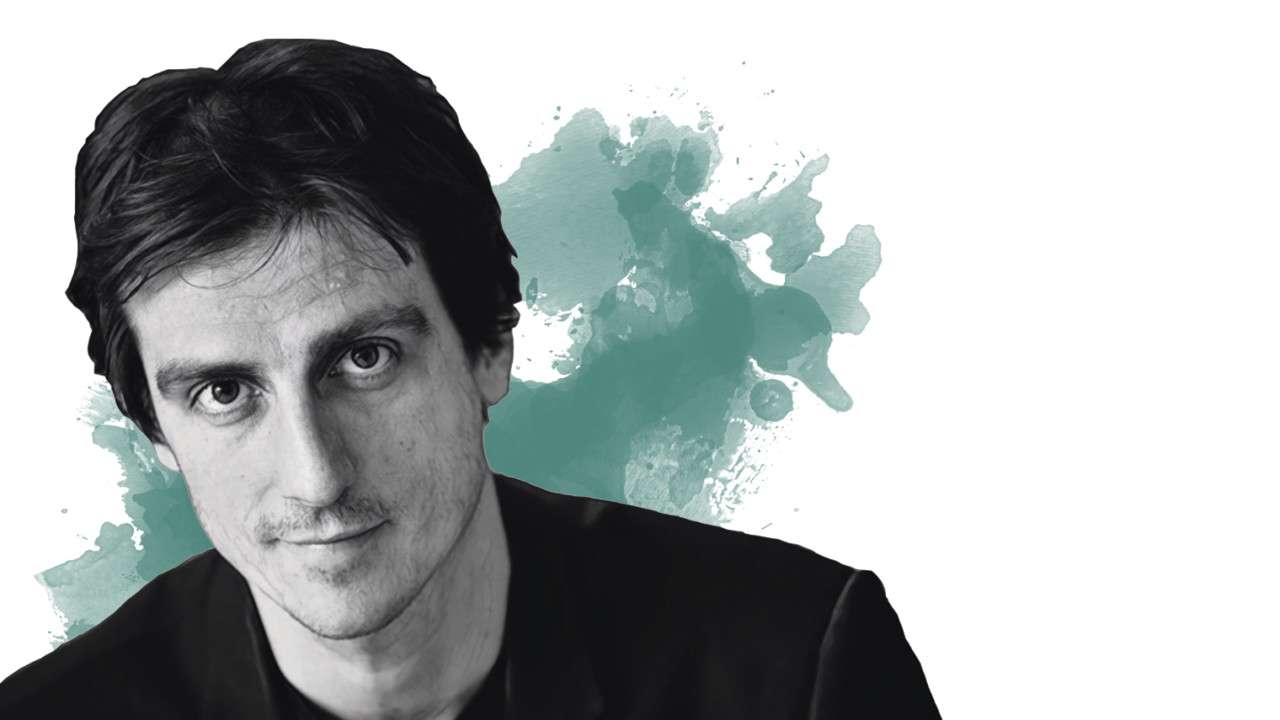 The way people communicate is constantly evolving and has changed exponentially in the last decade, driven primarily by the fast-paced development of easy-access technology.

Conversations via social media and messenger apps are the new normal. Yet, for enterprises, big and small, adopting this kind of instant, informal way of communicating in the workplace has been slow.

Old-fashioned email, whether on our phones or desktop, is still the default way for colleagues and clients to organise and interact.

But the numbers show this is changing fast. Slack, a cloud-based set of team collaboration tools and services, founded by Stewart Butterfield, for example, now has six million daily users. And project management application Trello, launched in 2011, has more than 19 million users and was recently acquired by Atlassian for $425 million.

Following in their footsteps, a year ago, Facebook quietly launched its own work-based communication tool, simply called Workplace by Facebook.

According to the company’s vice president Julien Codorniou, who joined Facebook in 2011, the platform is based on the messaging apps that people “love and use every day” – Messenger and WhatsApp.

Workplace by Facebook, which started with browser and mobile-only applications but since October is available as a desktop app, is the first major Facebook product to be built outside the United States, primarily in London, where Mr Codorniou is based.

Its value proposition is different to other enterprise apps, he says, because it aims to “connect everyone in the company, from the chief executive to employees on the front line, to people who work in different offices, in different time zones, speaking different languages”.

The company already has 30,000 organisations, including Royal Bank of Scotland and Starbucks, using the platform – more than double from six months ago. Mr Codorniou was even surprised to find 15 women working in a London nail salon using it.

But messengers have been around for ten years, so what or who is driving this shift in enterprise communication now?

Two things, says Mr Codorniou; these are the ubiquitousness of mobile-only communication platforms and millennials.

People are entering the workforce without knowing how to use emails, mailing lists or the intranet

“People are entering the workforce, maybe for the first time, without knowing how to use emails, mailing lists or the intranet,” he explains. “But they know how to use messaging apps, photo apps, video apps; they want to work for companies that give them tools to work faster, better and, perhaps more importantly, will hear their voice.”

By 2020, it is estimated that half of the world’s workforce will be millennials and it is expected that this digital-native generation will transform the workplace.

According to the 2017 Deloitte Millennial Survey, which garnered the opinions of 7,900 millennials across the globe, this generation wants flexible working, is keen to engage and share their opinions, and places a high importance on a firm’s values.

“People who want to have a voice will chose an employer based on being able to have that voice; they want to feel connected to the leaders of the company and want to know the values of the company – it’s quite important,” says Mr Codorniou.

To give employees this voice, Workplace combines instant messaging between individuals and groups, a Facebook-style newsfeed to which live video can be streamed, as well as video calling, and other Facebook applications, such as language translation.

Like other communication-based apps, it’s geared towards sharing and connecting more easily and informally, which is especially relevant given that companies are increasingly decentralised, with employees spread across different offices and even continents – a trend that is set to grow.

Mr Codorniou believes that social media-style communication platforms can lead managers to talent they may otherwise not have discovered.

“I’ve heard of many CEOs, who have seen an idea they liked promoted on a Workplace post, pick it up and identify the talent,” he says.

It seems many managers also want to see a change in the way their organisation communicates. Deloitte’s Transitioning to the Future of Work, and the Workplace Embracing Digital Culture, Tools and Approaches report found that only 14 per cent of responders were completely satisfied with their organisation’s current ability to communicate and collaborate, with 65 per cent seeing digital technologies as enabling a massive change in how to accomplish better communications, collaboration and connectivity.

Perhaps it’s unsurprising then that 451 Research analysts estimate the business communication and collaboration software market will grow from $15 billion in 2016 to more than $28 billion in 2020.

Bearing this in mind, could email be defunct in ten years’ time? “I don’t know,” says Mr Codorniou. “But I think it will be less important.” 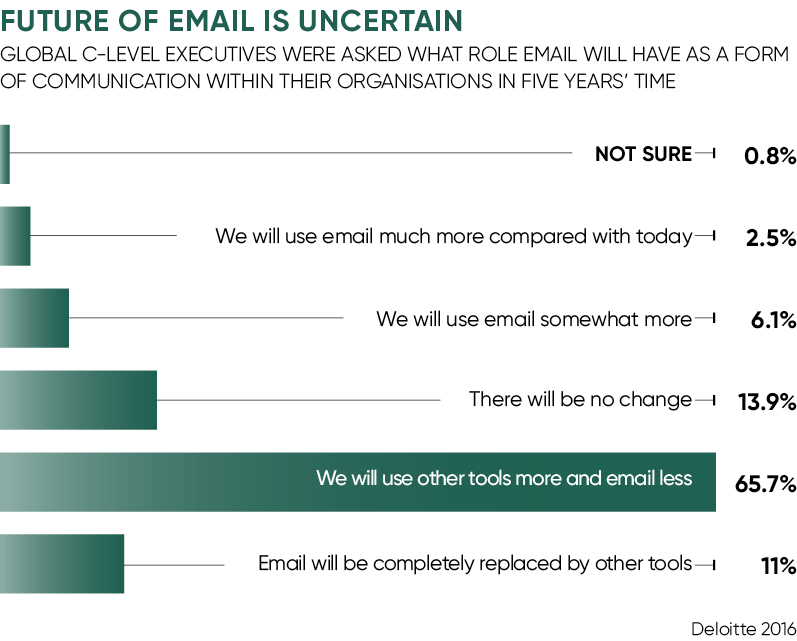 Many of the companies he has worked with in his current role are trying to kill emails, he says, though this is not Workplace’s intention.

However, he does think new user interfaces and new applications will take the lead over emails. Often, when a company launches Workplace, the amount of internal and external emails sent falls, he adds. Workplace can be used to connect with people not just internally within a firm, but also with workers from any other enterprises using the platform.

According to App Annie, in 2016 people downloaded more than 90 billion apps on the iOS App Store and Google Play, and spent nearly 900 billion hours in apps.

If people will now be using apps constantly for work, could we experience application and communication overload? Mr Codorniou says he hopes not, adding that most apps people download on their phone are not necessary as a separate application and instead should be integrated together. This can be done with the help of bots.

“Bots will help us go from collaboration to automation in departments from HR to IT, to provisioning, to procurement – if you need to book a meeting with someone, you can ask the bot to do it for you,” says Mr Codorniou. “We think this is what will drive engagement and retention in the workplace.”

For example, Envoy, an iPad-based visitor registration platform for companies, when integrated with Workplace, can notify someone directly via a chatbot that they have a guest waiting, he says.

“We see everything from inventory management, shift management, vacation management happening via a bot platform,” he adds. “With a bot you could even replace everything you type with voice command; we don’t do that today, but it could be something interesting to work on.”

Will this cost jobs in the future? “Yes, absolutely – everything you can automate can be done by a bot,” Mr Codorniou says unequivocally.

Will this transformation in the way enterprises operate, from bots to a more open and connected culture, to simply informalising the way colleagues communicate, require a shift in mindset for some organisations?

“Yes – it is quite easy to do all of this at Spotify or Deliveroo because everyone is used to it,” he says. “But if you look at other companies, it takes proper change management to help the company to go through the transition.”

Mr Codorniou says he is focused on growing Workplace and building partnerships with big firms such as PwC to keep doubling user numbers every six months on both the free and paid-for premium platform. New and current users should expect more bots and more integration.

As for the future of workplace communication in general, he is clear: “Millennials and mobile devices will define what the next-generation workplace will look like – expect future communication to be less formal, more instant and more inspired by messaging apps,” he concludes.

And as you go to check your mobile notifications for the umpteenth time today, you might find it hard to argue with such a vision.