The market research industry is like a duck that is gliding across a pond, according to Paul Richards, a media analyst at investment bank Numis Securities.

“The duck looks like it is moving serenely, but under the surface its legs are paddling furiously to keep going,” Mr Richards says, explaining why the “insight” business of understanding consumers’ habits has been battling to cope with rapid change.

Revenues have been little better than flat in recent years as market research has been an underperformer compared with other areas of marketing services such as media and public relations that have grown strongly in recent years.

WPP, the world’s biggest marketing services group, estimates that the market research industry – or, as it prefers to call it, data investment management – was worth $45 billion globally last year. That was barely up on $44.7 billion in 2015, although it was a step up on $41.4 billion in 2014.

The market has been changing because the traditional area of custom research has been in decline, largely because it involves labour-intensive interviews and is costly. The big growth area has been in digital because the data and analytics are smarter, more efficient and cheaper.

Online allows research companies to build up a large database of consumers’ views on a range of subjects, instead of having to carry out face-to-face or telephone interviews for each survey.

Roger Parry, chairman of YouGov, the online research company known for its political polling, says: “These very large databases are constantly being updated with people’s consumer habits, their media habits and so on. With their permission, you can also monitor their Twitter habits, Facebook posts and search behaviour.”

Mr Parry explains: “It means you’re not having to do lots of bespoke, research fieldwork. You can give information to the client very quickly with a lot of detail.”

He is optimistic about the outlook for the market research industry as it evolves into a data and analytics business, and points to YouGov’s share price, which has doubled in the last 18 months.

“The industry is changing very radically,” he says. “Overall budgets are actually going up.”

Margins in digital are growing, even if revenues haven’t been rising that fast, which is further evidence that suggests the financial health of the sector may be better than it might appear at first glance.

Mr Richards says margins in digital data and analytics tend to be well over 20 per cent, whereas traditional custom research are now in the teens or lower.

WPP reported revenues in its data investment management division fell slightly on an organic basis last year. However, margins from market research had the “strongest growth” of any part of WPP, ahead of advertising and branding, albeit public relations was equally strong.

When Kantar, the market research arm of WPP, last year analysed social media trends on an insight project for Unilever, the maker of Dove soap and Lynx deodorant, it claims it managed to do the work “at half the previous cost, in half the time”.

No wonder marketers may be willing to pay a premium, if the work is effective. 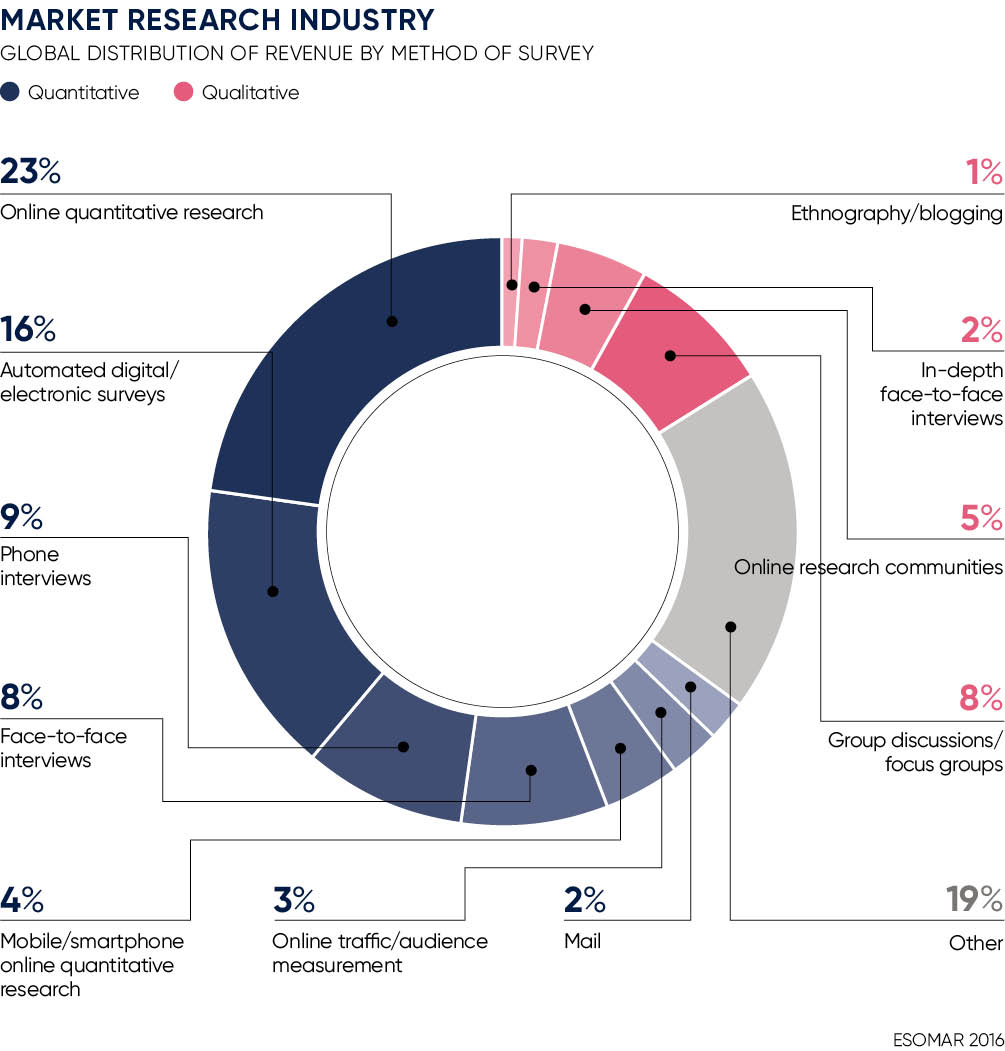 Furthermore, there is mounting concern about the risk of flawed digital metrics and the difficulty in accessing the “walled gardens” of Google and Facebook, which may be encouraging a flight to quality.

As Sir Martin Sorrell, chief executive of WPP, says in his annual report: “There seems to be a growing recognition of the value of ‘real’ first-party data businesses, rather than those that depend on third-party data.”

Many companies are beefing up their in-house insight teams, partly because it can offer business advantage, but also because new, tougher European Union rules on data management, called General Data Protection Regulation, come into force next year.

One of the greatest challenges for marketers is to marshal and organise data, which is often held in different silos and may come from numerous sources, both from internal departments and from third-party market research companies.

The ambition is to develop “a single customer view”, according to Rob Woodward, chief executive of STV, the Scottish broadcaster. Speaking at a recent Numis Securities’ conference, he explained how the broadcasting company “had to bring different databases together” in a process that took several years.

The winners in market research will be those companies that can break down silos and become more agile, so they can harness the power of big data in a digital world.