The last few years have seen swathes of companies in-house their advertising functions, but what is the impact on creativity when your employees are working on the same brand, year in year out? 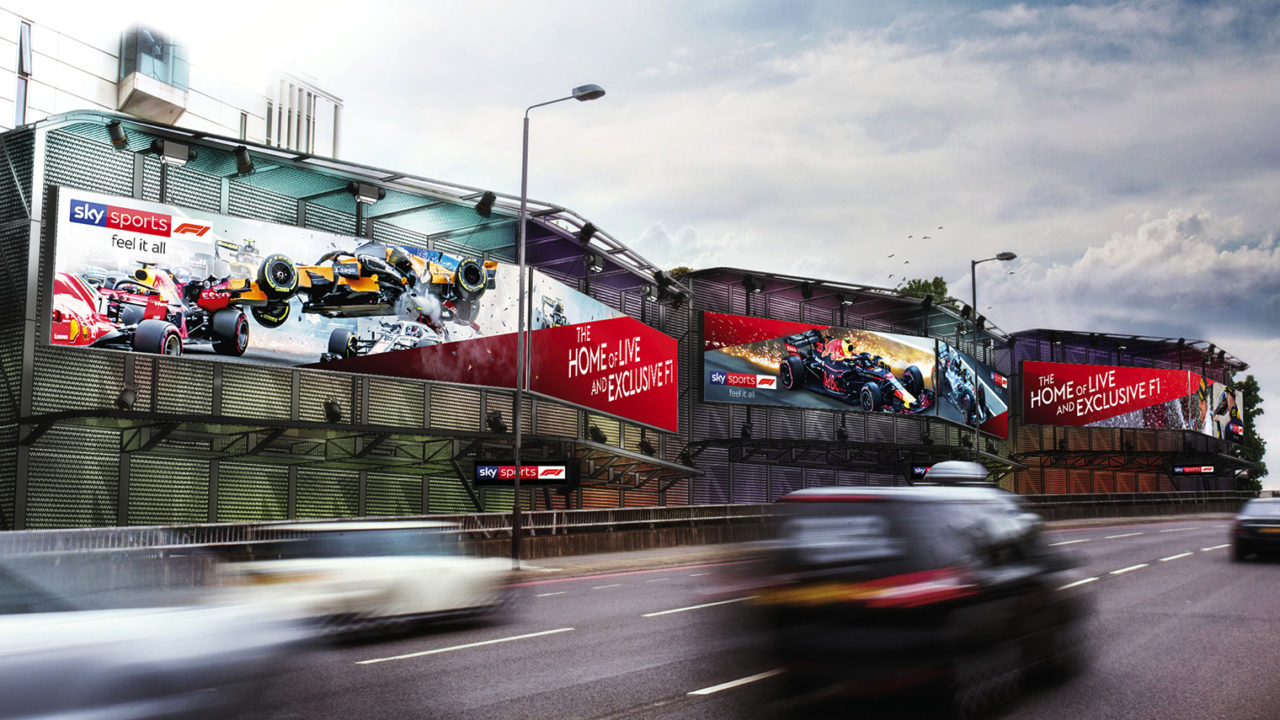 As the saying goes, if you want something done, do it yourself. Certainly, there has been a growing trend of brands moving advertising functions in-house, but industry professionals warn that such decisions cannot be taken lightly and must be considered on a case-by-case basis.

According to Ruben Schreurs, chief executive of consultancy Digital Decisions, there are now only a very limited number of top brands not working on in-housing as part of their media buying, production or creative strategies. But he believes the models working best are hybrid in nature, involving an in-house team alongside specialist partners.

Thanks to the surge of accessible software, martech has been democratised, meaning that in-housing has become more feasible

The benefits to be gained as in-housing becomes more feasible

That said, each brand is unique. Sky is one household name which has famously in-housed many elements of its advertising function, having created Sky Creative Agency (SCA) just over two years ago. Simon Buglione, SCA’s managing director, says the brand’s scale and expertise in content and technology is a huge advantage, and for this reason the rationale for Sky in-housing elements of its advertising is fairly clear. The same may not be said for many other companies.

“The key benefit is connection to brand. You’re part of the process as shows are being developed,” says Mr Buglione. “But we still work with creative agencies. There are times when an external perspective is useful.”

Alessandra Di Lorenzo, chief commercial officer, media and partnerships, at Lastminute.com Group, has also been working on in-housing media functions. She stresses that creativity in the digital age is very different to what it used to be. Certainly the amount of content that is being pushed out by brands across a plethora of touchpoints means there is considerable emphasis on day-to-day content and communications housekeeping over and above one-off campaigns.

“Thanks to the surge of accessible software, martech [marketing technology] has been democratised, meaning that in-housing has become more feasible,” she says.

The difficulty for brands, she adds, is finding the talent to understand and manage these technologies, and to deliver stand-out creative. Nevertheless she would encourage more brands to consider in-housing, with the caveat that in her view “big, brilliant above-the-line [mass media] brand campaigns still, and will always, need specialists to bring them to life”.

Pete Markey, TSB’s chief marketing officer, agrees on this point, despite describing himself as a growing fan of in-housing. TSB brought in Oliver Agency around six months ago to develop a social and content function in a unit working alongside its own employees. The model of having Oliver employees alongside in-house staff appears to be going down well. Founded in London in 2004, Oliver now operates in 42 countries.

The model offers huge flexibility, says Mr Markey, providing resources when you need them. He points out, however, that TSB has drawn the line at involving Oliver Agency in above-the-line work or so-called “big idea” campaigns.

Simon Martin, Oliver Agency’s chief executive and founder, says that in-housing in the UK has been accelerating for a couple of years, driven by the need for always-on campaigns and content. “We give them capability and capacity,” he says. “We don’t position ourselves as a hot-shot creative business that just does the big idea.”

Neil Munn, global chief executive of ad agency BBH, however, has some words of warning. “If you want to squeeze efficiencies out, you want to be careful not to squeeze out flair,” he says. “The biggest crime of advertising today is generic, bland advertising. Brands are built on difference.” And he warns that world-class creative types don’t want to work on one category or one brand. 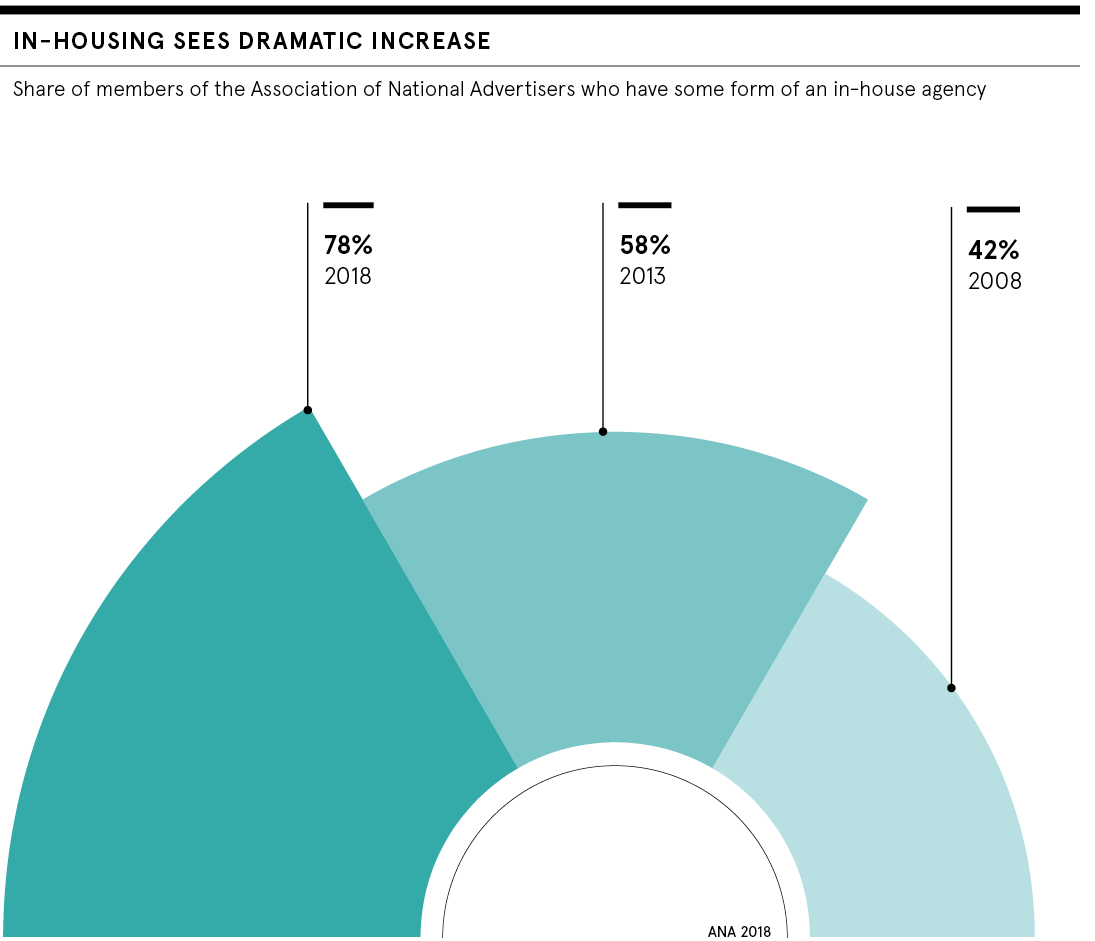 Is creating stand-out advertising harder than ever?

Talent is indeed a key consideration in the in-housing debate. Bill Scott, chief executive at Droga5, agrees that really talented creatives often want a variety of briefs and to work alongside like-minded colleagues.

Mr Scott also claims that smaller agencies with a more boutique offering can be very appealing, pointing out that Droga5 is often brought in on a project basis and has won business as a result of the drive towards in-house from the many brands seeking greater control, faster turnaround of content and cost efficiencies.

Similarly, Edward Glover, founder of independent creative agency Recipe, says that its model, which integrates production into its core offering, has been hugely advantageous. “We can react and create content of any kind incredibly quickly. We also operate with a project-based mentality, so it gives clients the flexibility to lean on us when they’re busy,” he says.

Sarah Douglas, chief executive of AMV BBDO, which works with more than 70 brands, concludes that excellence in creativity has never been more vital. “We are bombarded with over 2,000 messages a day, recalling a mere 2 per cent of them and acting on 2 per cent of the recalled 2 per cent,” she says.

It appears that cutting through the clutter and creating stand-out advertising campaigns may not be as easy as it might seem.