While the latest Office for National Statistics figures show a rise in output in the second quarter of this year, the UK still lags behind other major economies, trailing the average of the G7 group by 18 per cent.

Across the sector, opinions are divided on both the causes of the problem and the solutions, which include investing in new technologies, increased automation and more manufacturing apprenticeships. But, in reality, what are companies doing to solve the UK’s productivity puzzle?

How the UK is trying to increase productivity in manufacturing

Having worked with hundreds of manufacturing companies, Asif Moghal, UK manufacturing industry manager at Autodesk, has seen first-hand efforts to make manufacturing processes more productive. He says: “The problem is that many are focused purely on the shopfloor, bringing in robots and automated billing, and so on, to save costs and reduce risks. A more effective strategy would be to focus on making the product design and engineering processes more efficient.

Be wise enough to invest in people as much as plant

“One hydraulics manufacturer we work with has created an automated standard design template for its products that can be customised for each client’s requirements. With less time wasted going back and forth, and fewer mistakes, they have increased productivity by 40 per cent and revenues by 150 per cent, without increasing headcount.”

While new technologies, such as automation and robotics, can undoubtedly increase efficiency and output, concerns have been raised about the impact their increased presence in the workplace will have on labour relations, and ultimately on the discretionary human effort that drives higher output.

But some firms are finding ways to engage staff in the implementation of new technology. Sign Build, which creates signage for the UK house building industry, recently invested £500,000 in new technology on its factory floor, purchasing three machines that not only increase productivity in manufacturing, but boost labour relations and training, as the machinery requires a new level of skill from staff using the equipment.

Director Mark Cowin says: “Investing in new machinery is one small piece of the productivity puzzle. Those involved in the actual performance of a task are more qualified than anyone else in the business to tell you how things actually work, not how it should work. Spending money on new machinery without understanding the difference it will make throughout the whole business is the single worst and most common mistake made. Be wise enough to invest in people as much as plant.”

Chronic skills shortages in the UK manufacturing sector have impeded efforts to increase productivity and many consider this issue a top priority with apprenticeships increasingly seen as important.

Antony Bourne, global manufacturing industry director at IFS, says: “While university degrees across core disciplines are still highly beneficial for a career in manufacturing, the on-site experience and skills earned by apprentices now makes them equally attractive for prospective employers. Manufacturing methods are also adapting so rapidly that on-site skills are often the most highly valued among new recruits.” 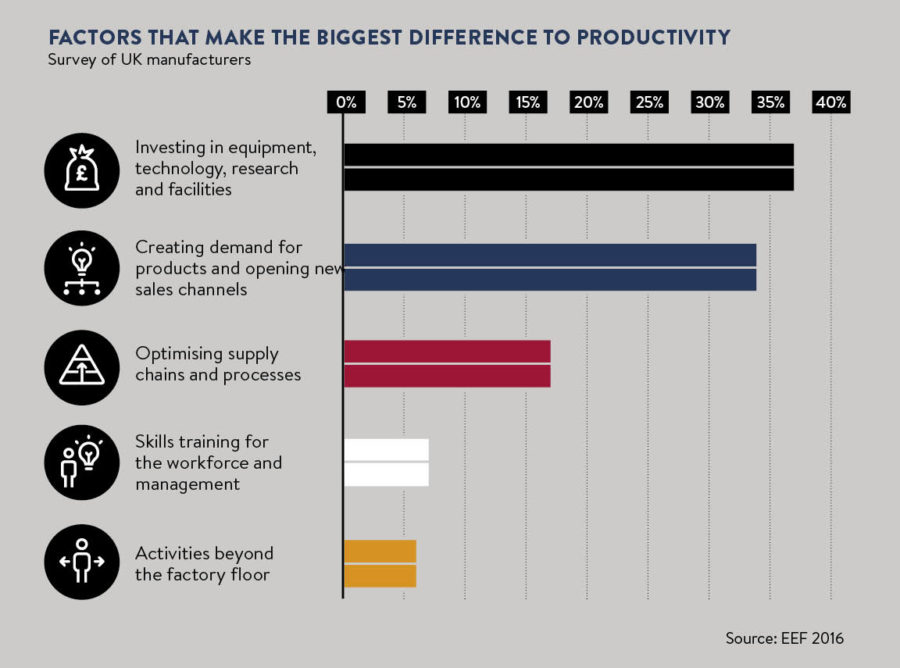 How to increase production in manufacturing: collaboration is key

There are plenty of manufacturing facilities that are mechanically sound but require regular manual intervention and could lift productivity by introducing more modern monitoring and control approaches, typically involving a smaller investment than upgrading an entire facility.

Manufacturers that overlook opportunities to collaborate are also missing a trick with regards to improving productivity in manufacturing. Steve Lindsey is the founder and chief executive of Lontra and designer of the Blade Compressor, a product built in the UK thanks to Lontra’s partnership with another British company, Shield Engineering.

“If your business revolves around a new invention, it’s virtually impossible to succeed without the assistance from peers and partners, and much of our success is owed to collaboration,” he says. “We believe the combination of disruptive technology from relatively small companies like Lontra and established British businesses like Shield could hold the key to reigniting Britain’s productivity in the manufacturing sector.”

Technology innovation is the way to achieve real step-change improvements

A collaborative approach is at the heart of the High Value Manufacturing (HVM) Catapult, a government initiative set up five years ago. Following the example of countries such as Germany, HVM Catapult centres take some of the risk out of the innovation process by providing access to equipment, expertise and a collaborative environment. Last year alone, more than 3,000 companies, over half of them small and medium-sized enterprises, worked with the HVM Catapult.

Chief executive Dick Elsy says: “Manufacturing companies are extremely diverse and there is tremendous, and often untapped, scope to learn from each other. Taking technology innovations that have been tried and tested in one sector, and adapting and implementing them in another sector can yield significant success at greater speed and less cost. Improvements do not always need to start from square one; the solutions are often already out there and merely need adapting to meet the needs of specific sectors and settings.”

Established continuous manufacturing productivity improvement methods have proven their validity, albeit gradually. However, if UK industry is to thrive in the competitive global markets, the pace of improvement has to increase, driven by technology innovation.

Smart factory technology, for example, creates an environment where all available information, from shopfloor and across the supply chain, is captured in real time, made visible and turned into actionable insights.

The use of digital modelling and simulation in the design and build of factory layouts helps to minimise space and maximise manufacturing process efficiencies, and intelligent robotics enabling robots to work safely alongside humans and to heal themselves when something goes wrong are areas that will prove critical in driving up productivity.

“Combined with the internet of things and other Industry 4.0-related technology, this is set to transform the way we make and use products,” says Mr Elsy. “Technology innovation is the way to achieve real step-change improvements that can make the difference between being a cottage industry and a global leader.”

The Unipart Group, whose operations span many sectors including manufacturing, has taken its own approach to increasing productivity. While it sees fourth-generation technologies as vital to higher productivity, the company’s real focus is on people, and ensuring they have the skills and knowledge to use these technologies to maximum effect.

Their approach to achieving this is known as the Unipart Way, a philosophy of working that is underpinned by a set of tools and techniques that form the basis of their knowledge management system.

As Unipart’s chairman and group chief executive John Neill points out, the answer to the UK’s productivity issues is not more money, but a commitment to improving performance. He says: “We coined a simple phrase ‘creativity before capital’ or ‘grey matter before the greenback’. You have to harness the talent and the creativity of your people to take waste out of the system by working in teams, using problem-solving tools and improving productivity.”

In 1993, the company also built the UK’s first corporate university, Unipart U, and set up faculties on the floor at many of its global sites, giving employees a body of knowledge and creating a management culture which allows that knowledge to be deployed.

“If you are striving for long-term performance, you have to take a long-term view, and you need great coaches who know what good looks like and can teach you the techniques of how to do well,” he says. “You need a body of knowledge to do problem-solving in a systematic way. Our people learn how to define the problem and the desired outcome, and use our tools and techniques and a coach to work how to achieve it. As they get better at it, they can tackle bigger and more complex problems. It’s great for our people, who get satisfaction from using their creativity and their talent to find solutions, and it’s great for the company. There are no trade-offs here.” 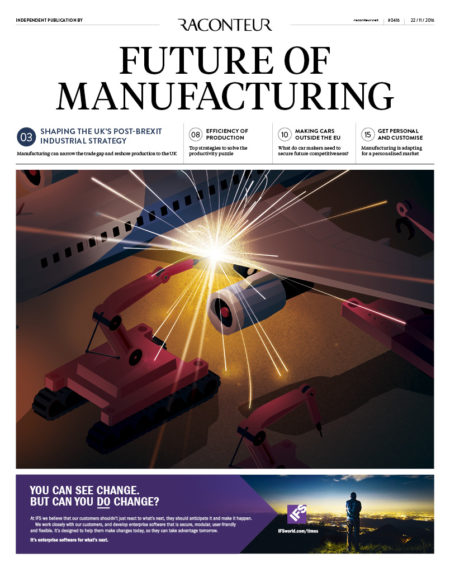