Picture this scenario. You’re an electronic goods manufacturer and you’ve had to put out a product recall following complaints from customers that their devices are faulty. Even though taking action has meant safeguarding customers, it’s come at a price as you’ve had to refund them or replace the faulty products.

Such a scenario can be avoided if the defect in question is spotted on the assembly line. “Humans tire easily and have the potential to be distracted. They’re prone to making mistakes. Automated assembly systems, combined with end-of-line buy-off equipment, such as intelligent vision systems, don’t suffer from this [problem],” says Chris Unwin, managing director of LAC Conveyors and Automation, which designs, manufactures and installs conveyor belt systems for blue-chip companies.

Vision-based systems are not new and have been used frequently by the manufacturing industry for inspecting and quality checking since the 1990s. But systems integrated with artificial intelligence (AI) take it a giant step further.

For example, US startup Instrumental, founded by two former Apple engineers, has developed a technology which can detect differences and distinguish between defects and insignificant design flaws that aren’t a cause for concern. The more images the system captures and analyses, the more it learns, and the better it becomes at spotting anomalies that could otherwise lead to product recalls.

This is an example of the potential of AI, a broad term that is often misinterpreted. One common misconception is that machines and devices that learn are beginning to think for themselves, rendering human workers redundant. But this couldn’t be further from the truth. AI-driven technology only does what it’s programmed to do, but for this to happen, manufacturers need to know what they want AI to do and be aware of the tangible benefits it presents.

AI’s value lies in it being a strategic differentiator to the wider business, beyond simply an IT responsibility

According to consultancy firm PwC’s Industry 4.0: Global Digital Operations Study 2018, only 1 per cent of UK manufacturing companies are considered digital champions, compared with 10 per cent globally. Furthermore, of the 72 UK firms (1,155 were surveyed in total), 1 per cent have implemented AI, with only 24 per cent aware of its potential.

Although AI technology is still in its infancy, rapid advances have been made; uptake, however, at least in the UK, isn’t accelerating at the same pace. The reason being that many small and medium-sized manufacturers often lack an understanding of the deep technical workings of AI, says Jens Roehrich, professor of supply chain innovation at University of Bath School of Management.

“Stakeholders want to know exactly how a system arrives at a diagnosis or recommendation,” says Professor Roehrich. “And manufacturers also need to be convinced that AI can save costs and increase productivity. The return on investment needs to be mapped out clearly for them.”

The reality is that the tangible benefits AI presents can have an impact on all aspects of manufacturing operations.

“Ultimately, AI is going to help [companies] make more informed decisions at each stage of the production process,” says Professor Roehrich. “It will even be used to improve material flows and optimise supply chains, helping companies anticipate [and react to] market changes.”

The IDC FutureScape: Worldwide Manufacturing Predictions 2018 report estimated that, by 2021, 20 per cent of the top 2,000 manufacturers globally, as ranked by Forbes, will be relying on the internet of things (IoT) to scale their processes.

What will this look like? As well as vision systems, there will be sensors monitoring the health of machinery, chatbots to deal with customer purchasing requests and also software to crunch the data, to name a few.

This smart ecosystem will enable manufacturers to run constant self-diagnoses, so preventative maintenance can be carried out without having to shut down production. For example, sensors monitoring machinery may detect a sudden change in vibration levels. Using AI capabilities, the sensors might read this to mean a part is faulty, alerting operators and enabling engineers to fix the fault before it affects output or leads to quality issues.

Another of the IDC predictions is that the IoT could speed up larger manufacturers’ execution of operational tasks by 25 per cent. For manufacturers of all sizes though, it’s also a window of opportunity to improve their robustness and responsiveness.

“Making use of IoT data is not just an operational necessity, but a commercial opportunity,” says Eric Topham, chief executive and data science director at The Data Analysis Bureau, a consultancy that works with clients, including manufacturers, to understand their data science needs and implement tailored solutions.

“Turning data into hard-to-replicate services can give those that adopt AI applications a competitive edge. Manufacturers are increasingly facing competition from economies including China, and need to add differentiating and hard-to-copy revenue streams to their business models,” says Mr Topham.

If manufacturers want to reap the rewards that the advent of Industry 4.0 and the trend of automation offers, AI shouldn’t be seen as an ancillary or auxiliary part of their company. AI’s value lies in it being a strategic differentiator to the wider business, beyond simply an IT responsibility. 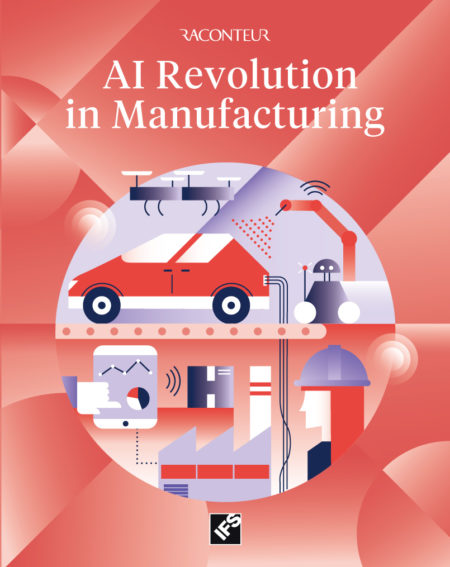 AI is a key strategic differentiator

Also in AI Revolution in Manufacturing