Far from a dystopian future, when the human race is struggling against domination by robots, smart machines could free workers from mundane tasks and improve job opportunities

When boffins at Oxford University and management consultants Deloitte published a joint study, which forecast that over the next ten to twenty years 35 per cent of UK jobs are at high risk of automation by machines with artificial intelligence, it sent frissons of fear down many people’s spines.

The shock was particularly great because, for the first time, it appeared that white rather than blue-collar workers would be hit, leading to labour-intensive, administrative roles in areas ranging from law to finance being eliminated.

But a year on and the situation appears less fraught following the publication of a second Deloitte study entitled From brawn to brains: The impact of technology on jobs in the UK that builds on the original 2014 research.

This report portrays a rather more positive picture. It claims that while technology may have contributed to the loss of more than 800,000 low-skilled, routine jobs over the last 15 years, it has also helped create four times as many higher-skilled posts – about 3.5 million – each paying just under £10,000 more per annum than the one lost. This scenario has, in turn, added a net £140 billion in new wages to the economy. 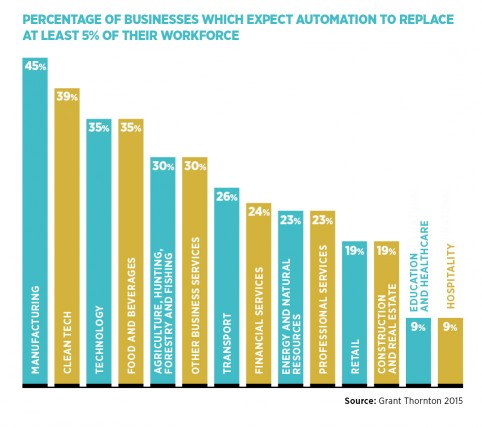 As for those jobs that have been and will continue to be lost, they are found mainly in areas which are repetitive and mechanistic, and therefore easy to automate such as clerical, administrative and manual work.

But thousands of new positions have been and will continue to be created elsewhere in the technological and creative spheres, professional and management areas and caring professions. They are at low risk of automation as they require high levels of manual dexterity and/or social or cognitive skills such as problem-solving and decision-making.

As Robert Brown, global head of business and IT consultancy Cognizant’s Center for the Future of Work, points out: “Computation, which involves huge amounts of pattern recognition or data analysis, is easy for artificial intelligence or AI systems, but hard for humans. However, if that information is fed to humans to help them decide on the right thing to do, the symbiosis is a winning combination and frees people from doing rote tasks.”

The human-machine combination augments total intelligence, and can significantly raise both productivity and quality

Mr Brown agrees that while certain job categories will be disrupted by AI, new ones will emerge. He cites the role of “Twitter data-wrangler” as a prime example. Although it would have been inconceivable just a few years ago to employ experts practised in gaining maximum social media exposure, it is now one of the most in-demand skills in marketing.

But even as the impact of AI in the workplace starts to grow over the next few years accelerating these trends already in progress, things are unlikely to come down to a “binary choice” of employment between either humans or robots, says Angus Knowles-Cutler, Deloitte’s vice chairman and London senior partner.

This view would also seem to be backed up by a survey of 100 business leaders last year, in which three-quarters expected to see their workforces grow over the next four years.

“While technology can indeed wholly automate certain routine manual tasks, other occupations benefit most from the partial integration of technology,” Mr Knowles-Cutler says. “The resulting human-machine combination augments total intelligence, and can significantly raise both productivity and quality.”

His colleague Costi Perricos, Deloitte UK’s lead partner for analytics and information management, agrees. “When man and machine interact, you always get the best results,” he says.

To illustrate the point, he quotes the example of Russian chess grandmaster Gary Kasparov. He created a new version of the game called “freestyle chess” after IBM’s Big Blue supercomputer beat him in 1996 due to a bug in its code, which led it to make such a bold move that Kasparov gave up. With the freestyle variant, two humans play either each other or a computer, but are also allowed to employ their own technology too.

“It’s consistently been shown that a human playing with a computer will always beat another human or machine,” says Mr Perricos. “It’s a simple case of how; when you combine the two, they’re more powerful than either is on their own – and it’s the same with AI.”

But beyond a few pockets, adoption of the software is still only very much in its infancy. This means that most organisations are still trying to understand what they can do with it and what it can do for them, not least because the term AI covers numerous different forms of the technology.

According to Lee Beardmore, chief technology officer of global business process outsourcing at management consultancy Capgemini, the most established of these is machine-learning.

Software’s predictive algorithms and pattern recognition capabilities are used by search vendors such as Google to build up pictures of their users in order to provide them with the most relevant search results. Retailers such as Amazon also use it to make purchase recommendations to consumers based on their previous buying behaviour.

Similar in nature is cognitive computing, but rather than specialising in numbers and structured data, it focuses on unstructured data such as text. This means it can locate relevant clauses in legal documents based on given parameters, for example.

The next most common form of AI is natural language processing. This software acts as a translation layer between machines and humans as is the case with the speech recognition capabilities provided by Apple’s Siri or Microsoft’s Cortana.

At the enterprise level, such technology is also employed in the form of virtual assistants. They handle basic customer service queries such as bank balance inquiries either on the phone or via webchat before handing over to humans when problem-solving abilities are required.

As Mr Beardmore concludes: “The business case and the objective are to have fewer humans working on mundane tasks so they can focus on value-add and exception management. So in future one of the biggest areas of advancement will be in freeing people up to achieve things that are now impossible.”