If you think it’s not worth your business bothering with machine learning, consider what rivals might be doing. Google now uses it as the third most important weighting factor for producing search results. Amazon uses it for computer vision so teams of robots can pick from a million items in warehouses to make up goods parcels for delivery. Stratified Medical, a company in London, is using it to spot patterns in data that humans miss and so identify potential new drugs.

Increasingly, companies are using cognitive intelligence, also known as machine learning, artificial intelligence, or AI, and neural networks, to do work that people either don’t want to, because it is tediously repetitive, or can’t because it involves data on too large a scale for any person or group.

For example, Google’s Photos app uploads photographs from your smartphone to your account on the search company’s servers; there you can search for “dog” or “cat” or “mountains” and the system will find them in your photos without you or anyone else explicitly tagging them. Google’s machine learning system analyses the pictures to figure out what is in them, and does that across 200 million users and billions of pictures. No person would want to do that; no group could.

But AI is not just a consumer-facing technology. The scale of use is potentially huge. Cumulative worldwide spending on AI systems in enterprise will total $40.6 billion from 2015 to 2024, according to a recent report by marketing intelligence firm Tractica.

An example is Rainbird Technologies, a Norwich company, which is providing an AI-based sales advice tool to the credit card company MasterCard.

“It’s all about interaction with the consumer,” says Ben Taylor, Rainbird’s chief executive. “AI becomes a great way to deliver the best possible customer journey. We do a lot of work with the financial services industry where the question is how do you know you’re providing the right product to the consumer?”

Rainbird’s collaboration with MasterCard aims to capture the existing knowledge and experience of the salesforce, and put that into software which will “learn” over time how different teams optimise their work, and spread the best practice and techniques across the team. In time, it will be a virtual sales assistant.

Widespread concerns that AI systems will take away jobs are misplaced, says Laure Andrieux, an entrepreneur looking at opportunities being created by the rapid rise of easily deployable neural networks. “Nobody complains that washing machines or dishwashers are ‘taking away jobs’,” she
notes. New forms of work are sure to be created, just as in every technological revolution before. We just don’t know yet what they will be like, rather as the Wright Brothers’ first flight didn’t obviously imply a future need for cabin crew or carbon fibre turbine blades. 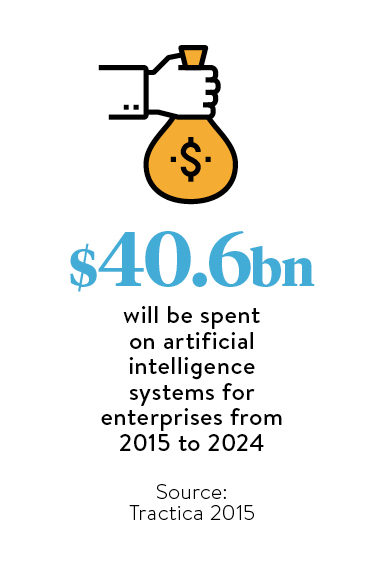 However, machine learning is disrupting existing business models and will do so to businesses that fail to adapt. “The strongest argument for anyone wondering if they need to use it is that if you don’t, change will be forced on you from outside by those who do,” says Calum Chace, author of Pandora’s Brain, who has studied the topic closely.

“Look at Uber; it’s using AI to disrupt the taxi business. Look at call centres; in ten years that work will probably be done best and cheapest by AI. Banking is facing the threat. Vehicle makers have notably begun pouring billions into self-driving technology because they can see that could have a drastic effect on car use and ownership, and don’t want to be left behind.”

Often it is businesses with the biggest risk-reward ratio that are most tightly focused on the potential benefits of this technology and are embedding it into their workflows.

For example, according to John Overington, vice-president of Stratified Medical: “It’s no longer economically viable to do drug discovery as it used to be done.” At current costs, the $490-billion market value of Alphabet, Google’s parent company, would pay for just 40 new drugs. But as more is understood about genetic sensitivity to drugs, the potential for reusing already discovered molecules for new treatments is growing.

“We now use the data that has been collected in the past and re-analyse it, and use it in inventive and creative ways, spanning all the phases from discovery to development,” says Dr Overington.

Transforming a business so that it is centred on AI requires identification of the elements that presently generate too much data for simple analysis. Rainbird’s Mr Taylor says that after years when AI, neural networks and machine learning were all deeply geeky research topics in university laboratories, it’s all now coming to fruition. “Now there’s a will to use it, and we have access to large data sets and faster computers, which we never had before,” he says.

Mr Taylor adds that it’s also a time when early adopters can reap the benefits. “It’s still quite early and there’s space for first-mover advantage,” he concludes. “If you can take a leap ahead of competitors, this technology is ready right now.”