Why are so many talented lawyers moving in-house?

The number of solicitors working in-house has more than doubled over the last 15 years, from almost 13,000 in 2002 to almost 28,000 in 2017. According to the latest figures from the Law Society, the representative body for solicitors, more than one fifth of the profession now works in-house for commercial or not-for-profit organisations.

Now in-house lawyers are seen as strategic business partners, whose work is core to the business and much more interesting and varied

A training contract at a City law firm followed by years of climbing up the law firm ladder and reaching the peak of partnership used to be the career trajectory favoured by most wannabe solicitors.

But as the figures attest, lawyers are increasingly eschewing private practice and the long slog to the Holy Grail of partner in favour of working in-house, where the atmosphere is regarded as more business-like and tech savvy, and more conducive to a better work-life balance.

The comparable salaries now on offer mean that this better work-life balance available to many in-house lawyers make it more attractive, says Charlotte Lakin, in-house paralegal at Live Nation Entertainment and the former student representative on the executive committee of the Law Society’s Junior Lawyers Division.

However, she insists that does not mean doing less work than private practice lawyers, rather it provides a means for greater flexibility and efficiency.

“Without the constraints of time-recording and billable targets, it makes it much easier to get the right balance,” says Ms Lakin, who worked in private practice at a variety of firms before making the move in-house last year.

She may have gone straight in-house had her university and law school career advisers been better informed about the possibility. “I don’t even recall the prospect of in-house roles featuring as an option,” she says.

For Ms Lakin, another benefit is the quality and variety of work, with instructions coming from all areas of the business. “There are always new issues, which means there is always an opportunity to learn. No two days are the same,” she says. But contrary to what some suggest, she insists that does not exclude the option to specialise.

Greater and more varied career progression is also available in-house, she says, providing a faster route to promotion because of the less rigid business structure.

As legal director at the Post Office Ben Foat explains, much of the shift can be attributed to the enhanced role of the in-house legal team within corporates. “Fifteen years ago, in-house lawyers sat in the proverbial backroom and remained distant from the business,” he says. “Now they are seen as strategic business partners, whose work is core to the business and much more interesting and varied.”

The changing role evolved due to heightened regulatory pressures since the global financial crisis, technological changes, increased complexity in some markets and the cost challenge.

Sending work to private practice law firms can be four to eight times as expensive as dealing with a matter in-house and fees of £1,000 an hour charged by some City partners are an incentive to keep work within the business, he says.

The main driver for lawyers looking to work in-house, observes Angela Floydd, European managing director at legal recruiters Laurence Simons, is to be “closer to the business”.

“In private practice, lawyers often get involved in a transaction at a certain point, when they would rather be involved sooner,” she says.

Ms Floydd adds that law firms are losing top talent to their in-house rivals because of their failure to innovate with tech, although she concedes: “They are doing more to become a little more innovative in how they evolve and develop.” 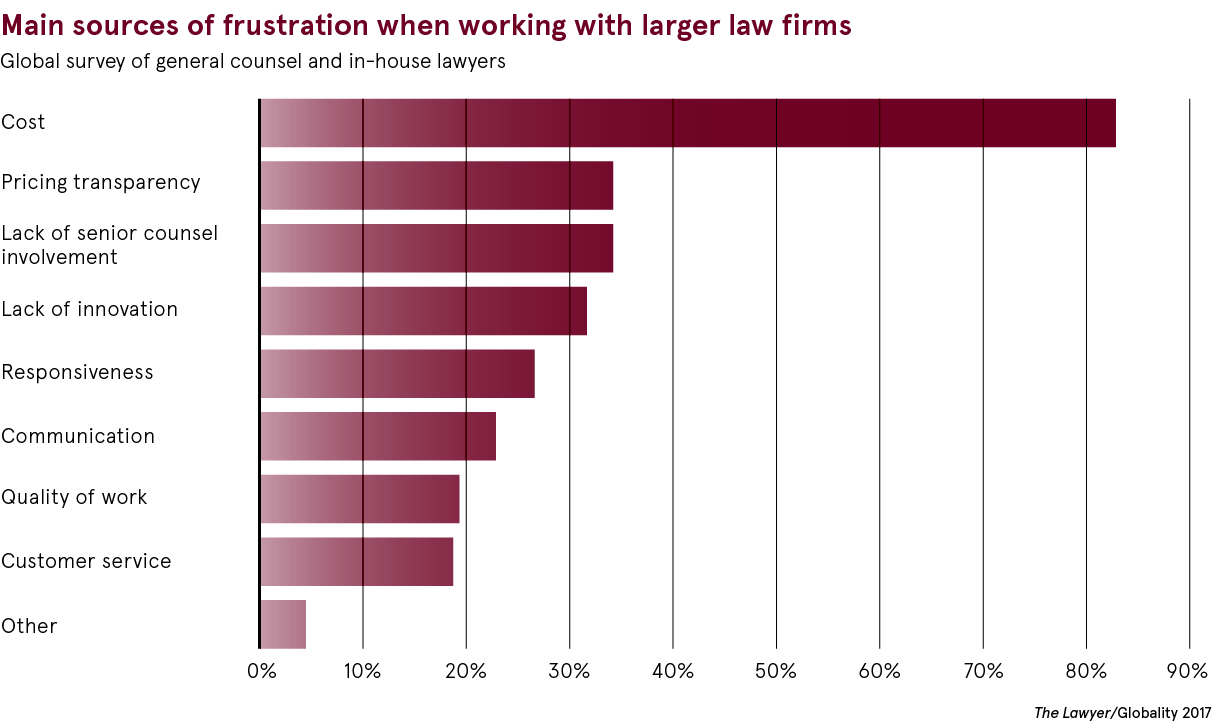 Law firms behind the curve for diversity and inclusion

Another area where law firms could be falling down and failing to attract the best people is in relation to diversity and inclusion. Corporates generally do better in this respect, which is seen as a positive and something that attracts the brightest young lawyers, says Ms Foat.

Bhavisha Mistry, general counsel at pharmaceutical company Mawdselys, worked in private practice before swapping roles and taking a job as general counsel at fashion brand Missguided. Working in-house, she says, enabled her to be at the forefront of the business and see her advice put into practice.

But she had to become more innovative in the way she delivered her advice. “I learnt that all the traditional methods of advice delivery had to be discarded. I had to think of new ways of getting things done,” says Ms Mistry.

“We lawyers get a bad reputation for being stuffy, unapproachable and deal preventers. We don’t place enough weight on getting to know our clients and showing our true personalities. What I have found is that when I do show my true personality, I get better results.”