Fraudsters thrive in disorder and chaos. Where there is disruption, criminals will wheedle their way in to take advantage of the confusion. A prime example is the recent collapse of 178-year-old tour operator Thomas Cook and ensuing potential for business fraud. Just days after the firm failed, banks and other financial services providers were warning customers about scammers.

That was just one company collapse. On October 31, the UK is set to leave the European Union, which means an almost 50-year multi-layered relationship would be unravelled. In this unravelling and the resulting confusion, fraudsters will look to prey on vulnerable businesses.

“Initially, Brexit will present quite a threat. If we leave the EU, and even if we don’t, the uncertainty that goes along with it puts us in uncharted territory,” says Marc McAuley, counter fraud services lead at the Chartered Institute of Public Finance and Accountancy (CIPFA).

“We don’t know what rules or regulations will be imposed on the UK public sector and UK business. But the rules will be certainly changing. And anytime there’s uncertainty or change it creates a threat for us and an opportunity for fraudsters to exploit our weaknesses, the ambiguity and uncertainty.”

Roy Waligora, head of investigations and corporate forensics at KPMG, adds: “Brexit will affect us in many different ways. Overall though, it would be imprudent to assume some level of disruption, and potentially chaos, won’t happen.

“Fraudsters are very agile and that does, to our mind, create the opportunity and environment for fraud. Fraud in general in the UK is a sizeable problem and a challenge both for corporates to deal with and also law enforcement.”

It is not, however, straightforward to pin down a concrete figure for the total value of business fraud in the UK, but it is clear fraud is a problem that is on the rise. The National Crime Agency (NCA) puts the total cost of fraud in England and Wales at £190 billion. The private sector is impacted the most, losing around £140 billion, according to the NCA’s estimates. The estimated cost to the public sector is around £49 billion, while individuals lose around £7 billion.

Amid the Brexit confusion there are certain areas where fraudsters may seek to take advantage of businesses, according to KPMG. These areas concern changes to the legal and regulatory landscape, business investment, tax and changes to the location of operations.

Many EU directives have been incorporated into UK law, but others have not. CIPFA’s Mr McAuley says this uncertainty over which rules the UK will keep and which it will not will create a gap that criminals can exploit.

“We’ve incorporated the EU’s General Data Protection Regulation into UK law, but there are other rules and regulations set by Europe that if all of a sudden we withdraw, what happens to those? Do we continue to abide by those rules or will business and the public sector deviate from them because they are no longer UK law? These are the areas that will create confusion and uncertainty. I believe there will be a spike in fraud intent,” he says. 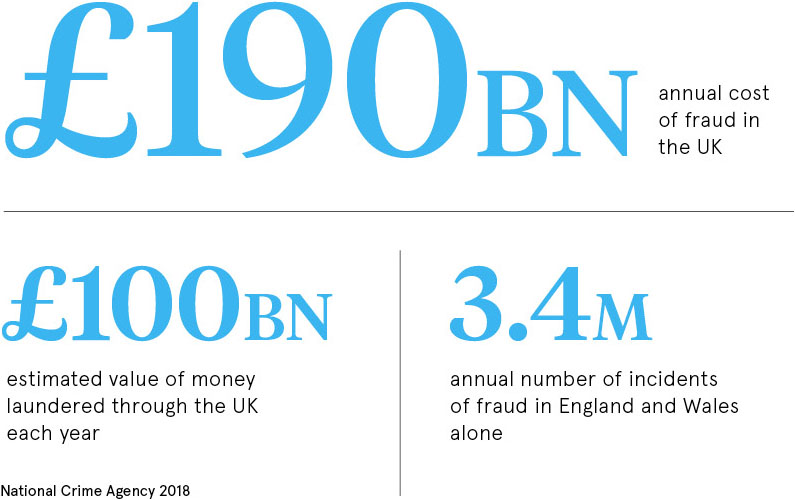 Worryingly though, the first wave of fraudsters seeking to exploit loopholes and confusion over legal and regulatory changes are likely to be industry insiders, KPMG says. Businesses may misrepresent their levels of access rights, tax benefits or central grant funding to secure investment, or business restructuring leading to job losses may cause a rise in business fraud.

When it comes to cyber-fraud attacks, it is less relevant whether the UK is in or out of the EU. Cyber-fraudsters operate on an international level from diverse locations around the globe. Arbitrary geographical borders are an irrelevance to international fraudsters.

“There’s some assurance and confidence in our enforcement, but it’s the unknown – what the attack will look like – and the level and methodology of it, as well as whether or not we are ready to cope with it,” says Mr McAuley.

And here’s the rub: cross-border cyberattacks are increasingly dealt with by cross-border counter fraud teams working collaboratively around the world. There is a risk that Brexit could impact information-sharing among law enforcement agencies. Overseas arrest warrants could also be affected.

The flipside of leaving the EU

One advantage to leaving the EU single market, however, could be a fall in the incidence of carousel fraud, also known as missing trader fraud, in the UK. Carousel fraud is where criminals import goods VAT-free from other countries, then sell the goods to domestic buyers, charging them VAT. The sellers subsequently disappear without paying the tax to the government.

It will not reduce this kind of fraud overall, but the VAT scam will be displaced to outside the UK. However, just as quickly as one tax fraud fades, another is likely to take its place.

A further opportunity for business would be to embrace the upheaval of leaving the EU and use it as a chance to review all policies and procedures in the supply chain, knowing your business partners and other aspects of a business vulnerable to fraud.

It is unlikely fraud prevention will ever eradicate business fraud. And as new technologies bring us untold benefits, they also aid organised crime to devise new ways of defrauding businesses.

Cybercrime is clearly set to grow, so governments and business leaders must co-operate to combat increasingly complex frauds. Outside the tight-knit EU community, it would be vital for the UK to ensure cross-border collaboration and international co-operation in the fight against rising fraud. It is, however, in all parties’ interests to work together.