Prompt diagnosis of a heart attack and other cardiac conditions can radically improve the patient’s chances of survival and limit serious damage, but symptoms can be hard to spot 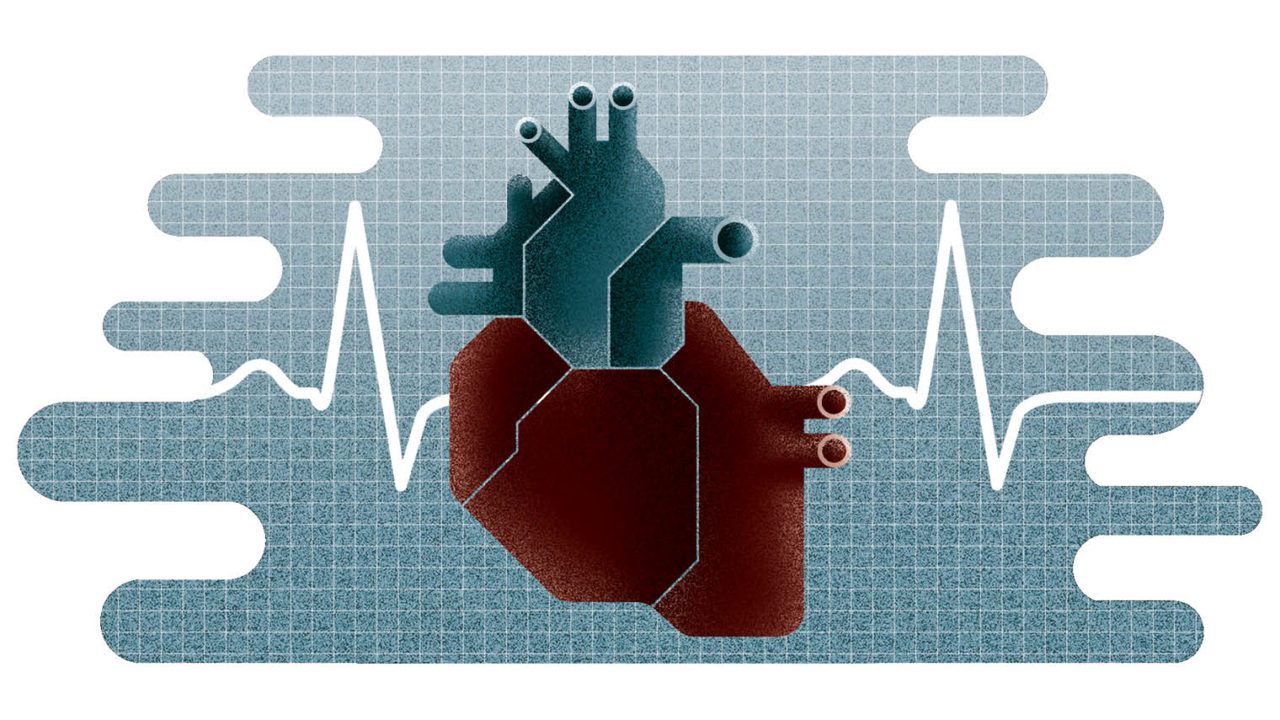 The words “heart attack” conjure up the unmistakable image of an overweight, middle-aged man clutching at his chest and falling to the ground. While this scene is common in Hollywood films, a recent poll by the British Heart Foundation (BHF) showed the reality is very different.

Up to eight in ten patients said they didn’t immediately realise their symptoms were of a heart attack and one in three believed it was indigestion. This led half to wait at least an hour before seeking medical help.

The problem for both patients and medics is that misconceptions of what a heart attack looks like can translate into misdiagnosis.

Recent research from the University of Leeds, charting the fortunes of 600,000 heart attack patients from when they first saw a medic to their discharge from hospital, found three in ten were initially misdiagnosed. The research also showed this was 50 per cent more likely to happen to women than men. 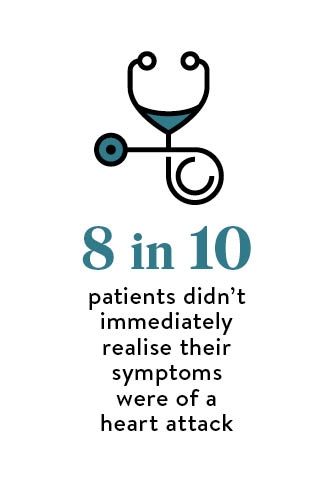 “Of patients who had a heart attack and were initially misdiagnosed, we found a 70 per cent increased risk of death within 30 days,” he says. “This meant the death rate for this group rose from 2.25 per cent to 4.2 per cent.”

While well-known heart attack symptoms include pain or tightness in the chest, nausea, vomiting, light headedness, sweating and shortness of breath, heart attacks can manifest in a far wider variety of forms, especially in women. This can include severe anxiety, discomfort in the stomach, back, neck or jaw, palpitations and fatigue.

Dr Mike Knapton, associate medical director of the BHF, says understanding the array of symptoms is particularly important for women.

“There is still a perception women get breast cancer and men have a heart attack. But women simply get heart disease later in life,” he says. “If they do have a heart attack, they may not recognise the symptoms because they don’t have tight chest pain and it can be more subtle. Sociologically, women are often the main carers and are used to looking after others, and so they might not take their own symptoms as seriously.”

Lisa Price, 44, from County Durham, suffered a heart attack aged just 38 while in hospital recovering from an ankle operation. She was misdiagnosed for four hours.

“I was waiting to be discharged when I started to get this burning pain in my chest. The nurses thought I was having a reaction to the anaesthetic from my operation and so gave me paracetamol, but it got worse and worse until it felt like a cannonball was being pushed through my ribcage. Eventually I was given an ECG that came out normal and then a blood test that was also inconclusive. Further tests showed a blood clot had triggered a heart attack, but by this time I’d suffered damage to the front left wall of my heart leaving me with heart failure.”

Around 50,000 men and 32,000 women have a heart attack every year in the UK. Despite being relatively common, it can still be hard for emergency medical professionals to spot the signs of heart attack before a patient gets to hospital.

Although many will carry out an ECG heart rate monitor to diagnose heart attack patients before they get to A&E, a 2014 study in the journal Heart showed this only occurs in just over half of patients.

Even then, an ECG only provides an absolute diagnosis of the most serious type of heart attack, known as a STEMI (ST-segment elevation myocardial infarction), when the coronary artery is completely blocked. The more common type of heart attack, known as an NSTEMI (non-ST-segment elevation myocardial infarction), in which the artery is partially blocked, can yield a normal ECG. 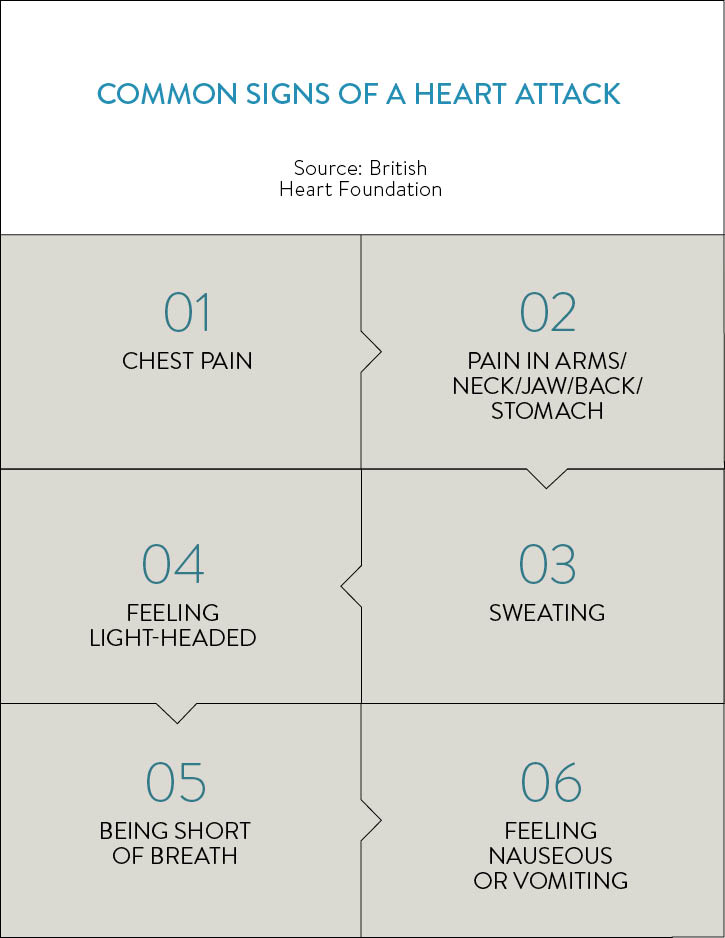 Patients who are misdiagnosed at this critical stage often miss out on the vital medications and emergency surgery needed to limit the damage done to their heart muscle.

“Heart attack patients who have a change in diagnosis are less likely to get the guideline care they need quickly, including aspirin, heart scans and even surgery to unblock arteries. They may not receive rehabilitation or be under the care of a cardiologist,” says Professor Gale.

Even a relatively new blood test that has transformed the rapid diagnosis of heart attack is not infallible. The troponin test detects protein biomarkers released during a heart attack, but analysis suggests the results are not always accurate for women. Scientists are now working to fine-tune the test for women.

The BHF points out that it is not only heart attack that can be hard to diagnose quickly. High blood pressure, an irregular heart beat, known as atrial fibrillation, and inherited cardiac conditions are often underdiagnosed.

“We know that around a third of people with high blood pressure have been diagnosed, but that means two-thirds have not. These people are at increased risk of stroke, heart attack and kidney disease,” says Dr Knapton.

Atrial fibrillation can also be missed because the irregular heartbeat does not always occur when the patient is being monitored. Other conditions, such as heart valve disease, can be caused by birth defects, disease or simply through ageing. Like heart attack, the vague nature of symptoms, such as shortness of breath and tiredness, can delay diagnosis. 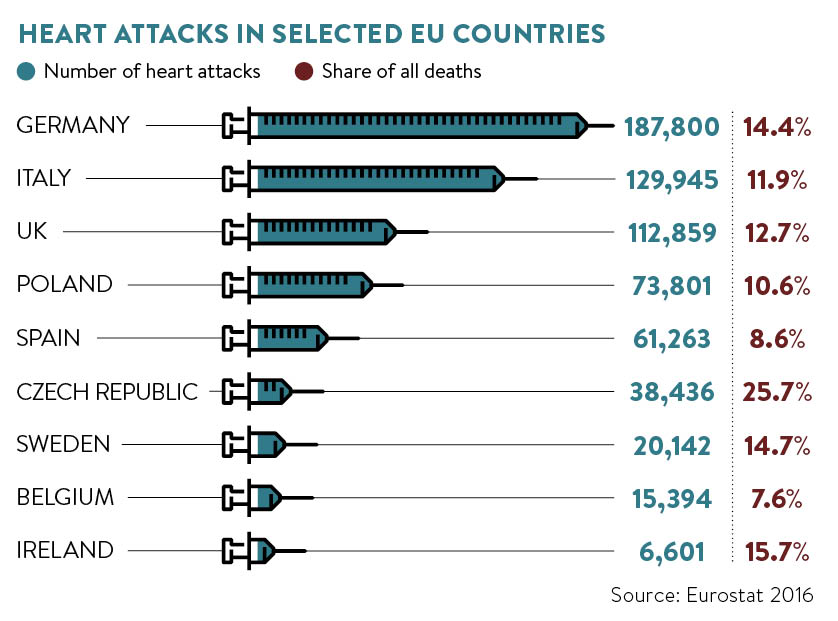 Despite the hurdles, NHS England says heart patients have seen huge improvements in care thanks to greater access to medications and an increase in the number of hospitals capable of providing coronary angioplasty, the emergency operation needed to open arteries and regain blood flow after heart attack.

In June, NHS England also unveiled new technologies for heart patients, including a device that can be strapped to a smartphone and can detect an irregular heart beat. They also have plans to increase awareness of the various symptoms of heart attack in a bid to boost survival rates.

According to an NHS England spokesman: “Survival rates for heart attacks are the best they have ever been, and swift diagnosis and treatment are key. We are working hard to improve tests for accurately diagnosing heart attacks in both men and women so correct treatment can begin without delay, ensuring the best possible recovery for patients. We are also working to increase awareness of signs and symptoms of heart attack, among both the public and healthcare professionals, as this will help speed up diagnosis.”