Minimising risk in export markets through management best practices should maximise returns, writes Elliot Wilson, who points out the pitfalls

Risk is everywhere: as Al Pacino’s character warns in the film Heat, you can get killed “walking your doggy”. But it’s also a necessary and even welcome facet of doing business. Without it there is literally no reward. What matters is how you manage and minimise the downside while maximising the upside.

Like ice cream, it comes in all shapes and forms. It lurks in basic financial risk – exposure to a tumbling currency or neglecting to secure insurance on an export shipment. Reputational or political risks are more nebulous, ranging from retail disasters – selling dangerous or unlicensed goods – through to breaching bribery laws to the hazards of offending foreign governments.

Take the primary challenge of selling into another market. Under the UK’s 2010 Bribery Act, exporters must be able to see a product through to its final destination, whether a retail or industrial buyer. That might be simple in Germany or Ireland, members of the single European market, but in the Middle East or West Africa, regions with patchy infrastructure and myriad middlemen, the process is anything but straightforward.

As a market grows in importance, the next step is often to form a joint venture, spearheaded by a well-connected businessman. But choose your allies carefully. Under the Bribery Act, executives are on the hook for any illegal inducements offered by a local associate. Companies, notes Hugo Williamson, UK managing director at global risk advisory firm IPSA International, should “invest time and resources in developing the right sort of relationship with partners”. That might mean bringing them back to the UK to show how governance systems work.

That issue works both ways. Any company foolish enough to bribe a foreign official runs a risk. But even if that goes unreported, you can still get burned. More than a few British firms have been blackmailed by a foreign subsidiary threatening to blow the whistle on their corrupt methods. All the more important then to sit down with a specialist law firm or one of the big-four auditors to assess risk parameters.

Political dangers are harder to quantify, but no less damaging. Falling foul of a foreign state can set you back years or even decades in key markets – witness IBM’s falling-out with India in the late-1970s or Google’s with China 30 years later. Better to butter up an enraged government. When pharmaceutical major GlaxoSmithKline was found guilty of bribery in China and fined £297 million, it responded by working with officials to train local scientists, and transfer skills and knowledge to the Chinese market. 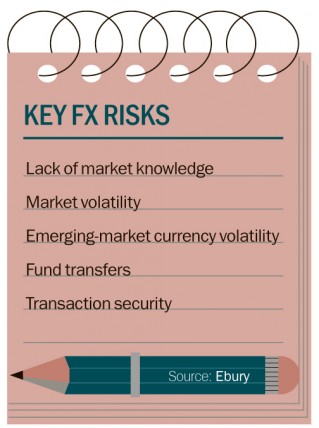 Perhaps the most insidious risk to any exporter involves trading in other currencies. Not long ago, this process was expensive and bafflingly opaque. Old-school brokers and banks, keen to turn a profit, kept costs high, luring customers with promises of low spreads – the gap between the bidding and asking price – then raising it over time. To all but the largest corporates, foreign exchange (FX) was a costly mystery, offering “zero value to clients”, notes David Kyte, chairman of Hamilton Court FX, and leaving small firms entirely at the mercy of their banking provider.

All of that has changed. Faster and cheaper bandwidth along with a distrust of lenders led to the rise of FX specialists offering streaming market data on even the most basic PC or smartphone. One such outfit, Kantox, helps hedge currency costs by providing a live feed direct to customers’ desktops. Philippe Gelis, the London firm’s founder and chief executive, describes the service as an online tool to manage FX. “We provide an online dashboard showing you where currencies are trading and alert clients when the perfect conversion rate has been reached,” he says.

Another way to offset risk is to take out credit insurance against, say, a shipment being damaged or going missing, or a buyer seeking to trick you on a payment. This is more common than you’d think, particularly when it comes to emerging markets. It might constitute an extra cost, but it does ensure that you get paid, one way or the other, notes Roman Itskovich, vice president at alternative trader and lender Ebury. “We offer credit insurance to all the companies we deal with and I am a big believer in it. With all the risks out there, it’s the best way to stay safe,” he concludes.