Several Southern African countries want to be exempted from a 35-year old global ban on ivory trading, threatening a hard-won consensus on the trade in products from endangered animals 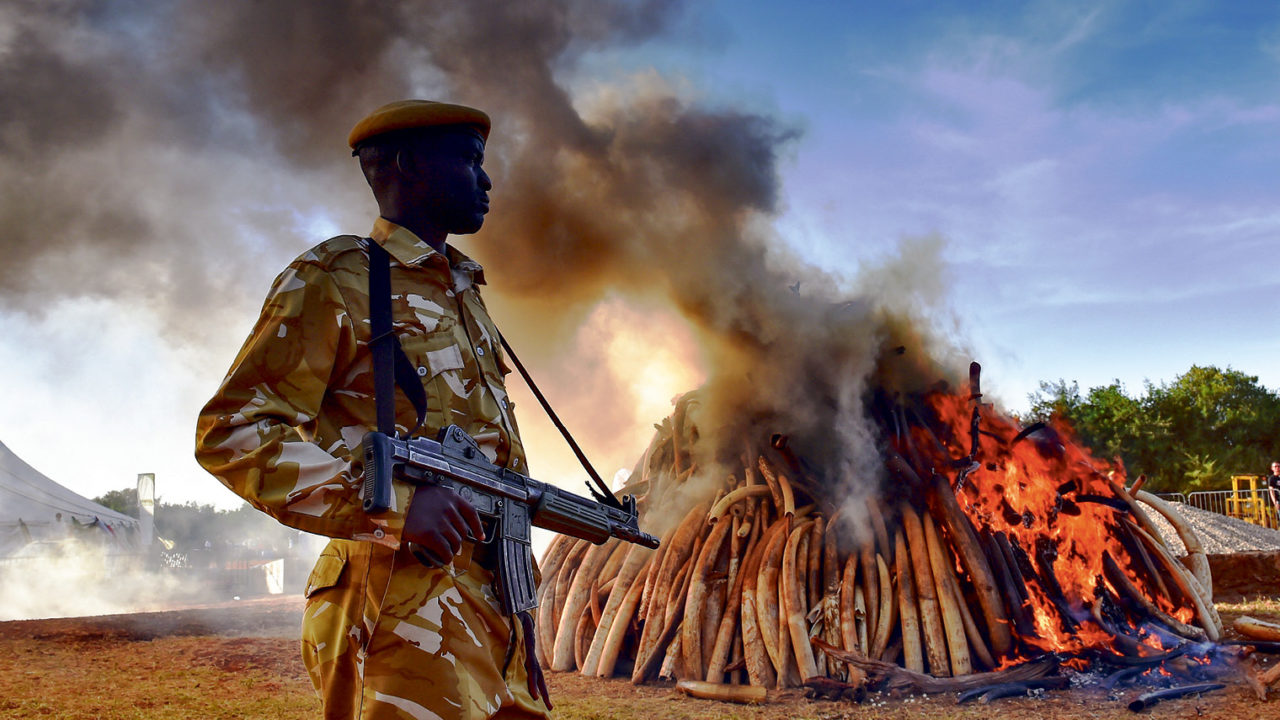 Behind a swing door in a nondescript office in an industrial building in Hong Kong’s Hung Hom district, two ivory cutters are bent over their workstations, turning small cylinders of tusk into delicate roses.

Lise Carving and Jewellery Factory owner Daniel Chan Chun-bo has been in the trade since the mid-1970s. The business, already dwindling, is now under threat of extinction, as the city prepares to ban all sales of ivory, after pressure from conservation groups who believe that the legal, domestic trade is fuelling the illegal, international smuggling of ivory, which is decimating elephant populations in Africa.

“It’s crazy. Nonsense,” Chan says, talking over the constant dentist-drill whine of the workshop. “I have done nothing illegal. I have no secrets.” The only products he exports, he says, are made from mammoth ivory, which he sources from Siberia.

Hong Kong has been identified as a country of ‘primary concern’ by the Convention on International Trade in Endangered Species, an institution created out of the global consensus that the trade in wildlife needed to be monitored and heavily regulated. Under CITES, almost all international trade in new ivory has been banned since 1989; domestic markets continued to operate, however, as did the movement of legal, “pre-convention” ivory. Alongside this, illegal, newly harvested ivory has entered the supply chain, often being laundered into pre-convention stocks through countries which, like Hong Kong, have a domestic market. Even legal traders, including Chan, admit that Hong Kong is a transit point for ivory heading onto mainland China.

The US introduced a near-total ban on the ivory trade this year, and China is moving in that direction. Under pressure from local conservation groups and international organisations, the Hong Kong government announced in June that it would end the domestic trade entirely by 2021; Chan is lobbying hard against the moratorium. His desk is strewn with pink folders of newspaper clippings, stills from local television exposés of the trade – which he says were full of misinformation – and spreadsheets of elephant numbers. The data, he insists, shows that the decline in herds is less to do with the ivory trade, and more with the growing conflict between growing human populations and elephants.

Amongst his sheafs of documents is one clipping that he seizes on enthusiastically: a report that Zimbabwe and Namibia have submitted a proposal asking that they be allowed to sell their ivory on the international markets again. The two countries want to hold open auctions and, in theory, use the money to fund conservation efforts.

“Their elephant [populations] have increased, not decreased,” Chan says. “They say, if they have no legal ivory trade, their elephants will be extinct. No more. Because they need the money to protect them, and to build the country. That’s the fact. I don’t understand why other African countries can’t do like [Zimbabwe and Namibia].” 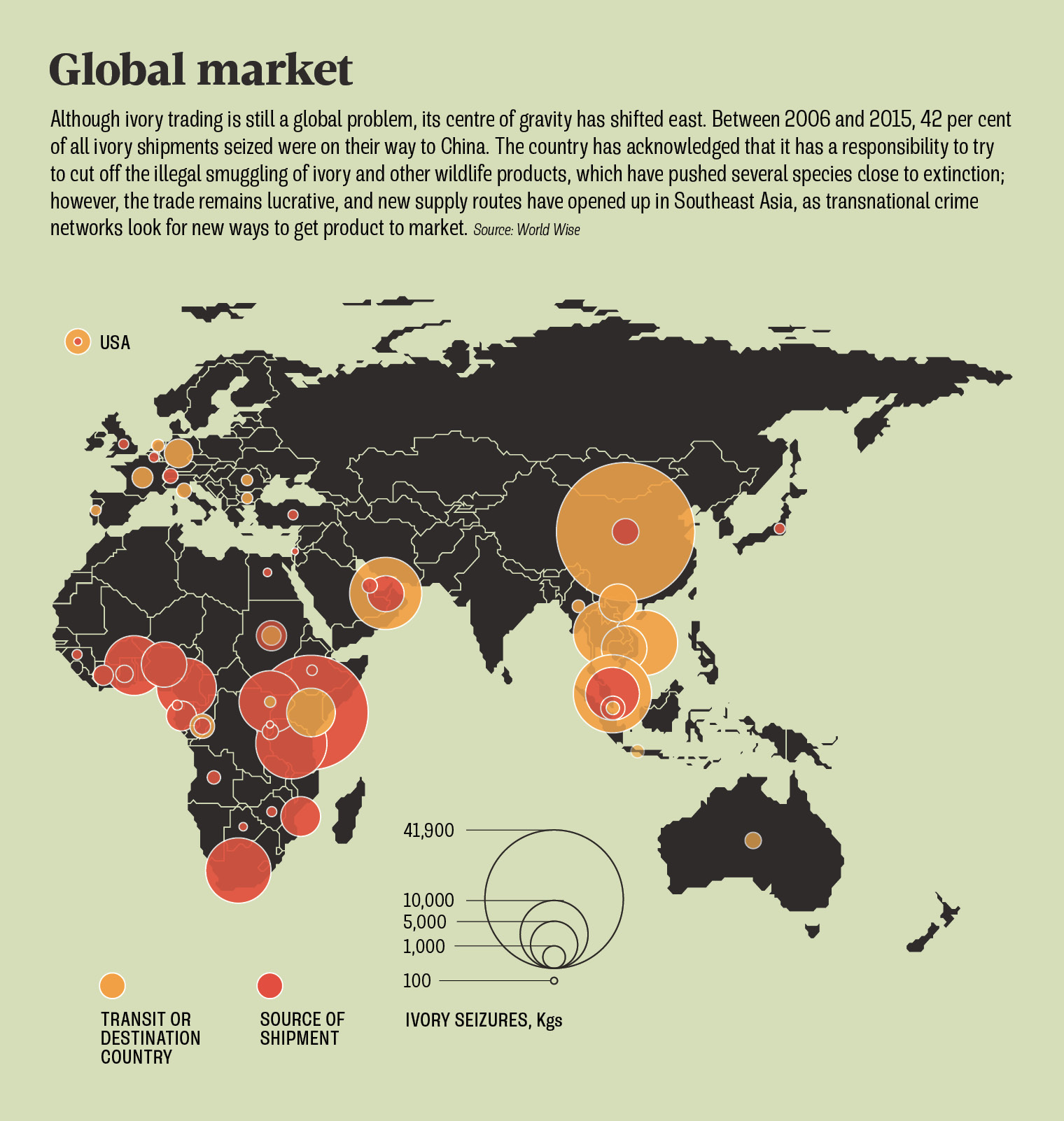 Others in the ivory trade, contacted by Raconteur, brought up the same argument. Whether the Southern African countries’ attempt succeeds or not, the fact that they have challenged the consensus on the global ban on ivory trading has given ammunition to campaigners like Chan, and undermined efforts to cut off the end markets for smugglers and poachers.

“I’m not surprised that’s the narrative [traders] are using,” says Ross Harvey, a senior researcher at the South African Institute for International Affairs who specialises in natural resource governance. “That’s why it’s so irresponsible for Zimbabwe and Namibia to go ahead with this.”

Southern African countries, and Zimbabwe in particular, have a complicated relationship with conservation, and with the CITES process. There is, Harvey says, a strong belief within these countries that they have successfully conserved their elephant populations – which have been in recovery – and that they should be able to benefit monetarily from them. The countries’ elephants are not included in CITES’ ‘Appendix One’, critically endangered classification, but have a separate moratorium on their trade, which their governments want lifted.

There is another motivation, according to Harvey: a deeply held resentment towards “colonial” impositions on the ownership and use of natural resources.

“It does seem to me that the argument, if you read the subtext, seems to be informed by bitterness and resentment, and they don’t like being imposed on by other people, other nations and so on,” he says. “Frankly, I don’t think they care what kind of impact their requests have on all sorts of other equilibria.”

We can wipe out a population of a species overnight. We need these regulatory controls today more than we’ve ever needed them

John Scanlon, the secretary-general of CITES, is diplomatic when asked whether the new proposals threaten the overall consensus on the trade: “I would say… we are seeing again a re-emergence of the differing points of view that have been around for some time,” he says. All parties to CITES have agreed to abide by its rules, which are approved through a multilateral process.

“The convention was put in place for good reason. That is that wild animals and plants were being exploited through international trade in a way that no one had any clue what the nature or the scale of the trade was, and species were being unwittingly driven towards extinction,” Scanlon says.

“There continues to be a good reason. In fact, we would say that the convention is more needed now than ever. The population growth that’s taken place since this was adopted. Our transport options that are available. The technology to harvest. We can wipe out a population of a species overnight. We need these regulatory controls today more than we’ve ever needed them.”