If robots are taking our jobs, they may also support our retirement. Bank of America Merrill Lynch estimates that 47 per cent of US jobs and 33 per cent of UK jobs have the potential to be automated. But the technology that could fill those jobs – robotics and artificial intelligence – is both a threat to some workers and a potential area of growth for investors, notably pension funds, seeking to capitalise on the new wave of industrialisation.

“It’s the next generation,” says Philippe Cerf, Europe, Middle East and Africa co-head of the technology, media and telecommunications group at investment bank Credit Suisse. “Machine-learning is applied to some extent across all tech these days.”

Taking an investment position on the technology associated with a specific trend such as this, called thematic investment, first requires the theme to be well defined. As artificial intelligence (AI) is an umbrella term, covering a range of specific technologies, understanding what qualifies is the starting point for any investor.

Duncan Anderson, chief technology officer for Watson Europe at IBM, says there are three aspects of technology that can fall into the category of cognitive computing, which IBM uses to avoid the science-fiction connotations of AI.

“The first aspect is understanding that typically includes natural language recognition, but equally it could be image recognition,” he says. “Trying to make sense of data coming into a system that a traditional computer system could not understand.” 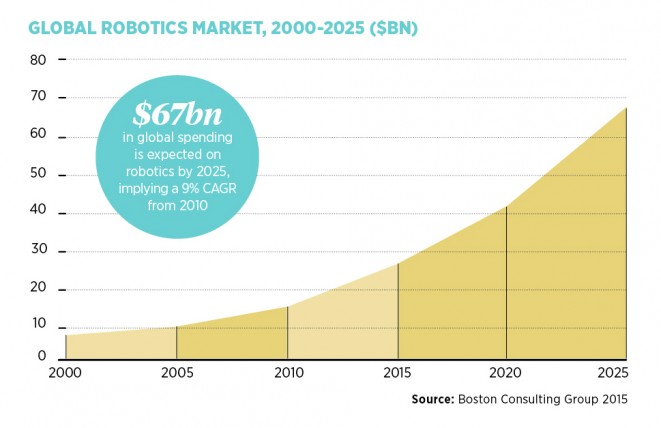 The second element is reasoning, for example working out the meaning of a question then forming a field of hypotheses about the answer. “That might also be working out which of those you might go with,” he says.

“The third category would be machine-learning, the ability for it to get better and to learn from experience, not just by being programmed.”

Professional investors are taking a growing interest in firms that are either exposed to or are based upon AI technology, although most analysts have different but overlapping universes of companies that are put in the AI bucket. Bank of America Merrill Lynch research indicates some $2 billion was invested in 322 publicly listed companies exposed to AI-based technologies in 2014.

Analyst firm Venture Scanner, which itself uses proprietary machine-learning algorithms to index, search and cluster similar companies, tracks a smaller universe of 910 specifically AI-focused firms across 63 countries which have raised a total of $3.68 billion in funding from a range of sources. 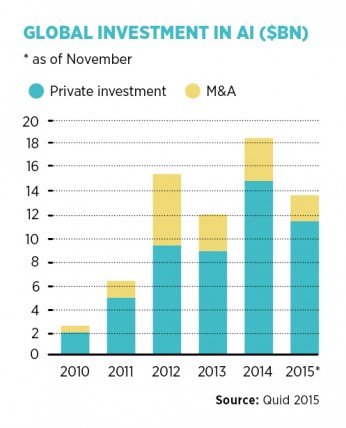 Sarbjit Nahal, equity strategist at Bank of America Merrill Lynch, says: “This market is going to take off over the next five years. To date we have seen a basic level, but I think that we are really going to see an uptake of machine-learning, natural language usage and image recognition with the different factors starting to come together. An integrated package in terms of machine-learning and the concept of intelligent machines will be going towards 2020.”

Possible investment opportunities stretch from direct investment in firms that are wholly or partially exposed to AI, buying into investment vehicles which are targeting investments, to crowdfunding startups. In many cases venture capital (VC) firms are funding these businesses from their early stages of development to the point of going public or being acquired by larger firms.

Investors should be cautious, warns Mike Lynch, founder of Invoke Capital Partners, a VC fund with £1 billion in assets, which has invested in several firms that use advanced pattern-matching algorithms and machine-learning.

“There are a relatively small number of people who can develop machine intelligence, so when a startup uses the phrase you have to be careful as to whether there really is machine intelligence involved,” he says. “The majority of things I am sent that claim to be conducted using artificial intelligence are done with humans.”

Dr Lynch, who was co-founder and former chief executive of Autonomy, which provides intelligent search tools based on probability analytics, notes that publicly listed companies will typically have customers using systems. This provides investors with the opportunity to measure success. For startups testing their systems at demonstrations is crucial.

“A lot of people are going to lose a lot of money on things that look great, but don’t work in the real world,” he says.

Mr Nahal also cautions investors to examine the market carefully. “When we talk about the risks, I think there can be a tendency to overestimate the impact of technology in the short term and underestimate on a long-term basis,” he says. “Shorter term, it’s going to be more opportunity than risk, allowing multiple sectors to deal with issues like wage inflation, productivity, and quality of products and services.” 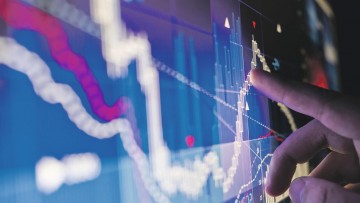 When machine-learning companies are successful, they tend to gain an early lead over others as the data they accumulate allows them to then leap ahead, just as big players like Google and Facebook have done previously.

“The technology learns from experience – this is the revolution,” says Dr Mike Lynch, founder of Invoke Capital Partners. “Whoever gets the data, their algorithms learn more and they get better. You get a very powerful feedback loop.”

But beyond the larger firms that are researching and investing in artificial intelligence or AI, other opportunities might present themselves to investors.

McKinsey Global Institute analysis has found that certain sectors are likely to be affected as AI automates knowledge work. These are:

The researchers at McKinsey also highlight infrastructure and utilities, transportation and retail as sectors that may be impacted.

For investors looking for professional investment support in identifying opportunities, there are several options. “There are a number of funds that have either integrated this as part of a larger focus on automation, disruptive technology or innovative technologies,” says Sarbjit Nahal, equity strategist at Bank of America Merrill Lynch. “Or there are a couple of dedicated funds that have been set up in this space, as well as an exchange-traded fund in the United States.”