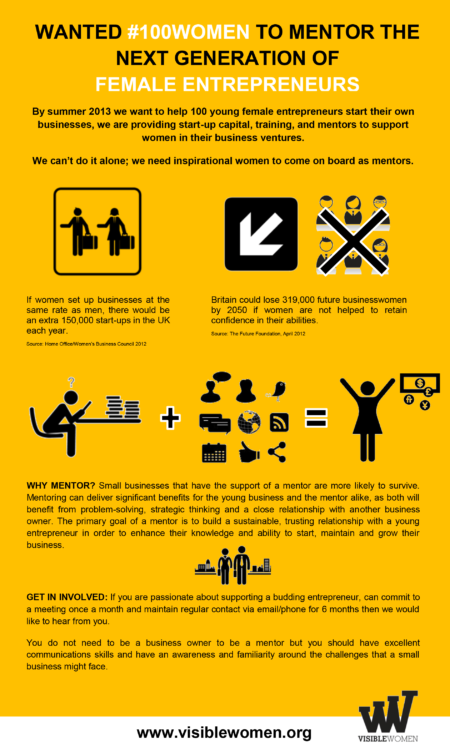 Every year, March 8 marks International Women’s Day (IWD). On the global stage, there is great fanfare and much merriment around the day, with many extending the celebration to cover the whole month.

But how relevant is IWD to the average woman and girl in the street? How many even know that such a day is celebrated and, more importantly, why should it resonate with them on a personal or professional level?

Recent research shows that women are still not equally represented in business and public life, especially when we look at where power resides. Women make up 22.5 per cent of MPs, 5 per cent of editors of national newspapers and there are only two female FTSE-100 chief executives.

Against the backdrop of such discouraging statistics, the Visible Women (VW) Campaign was set up with the aim of raising aspirations and promoting mentoring opportunities for young women and girls, while putting the spotlight on role models and mentors, sharing their success stories, through events, workshops and online.

It’s not enough for the next generation to have only celebrities and reality TV stars to look up to. So this year’s IWD Visible Women Campaign launched “I Am Visible” Week, which ran from March 4 to 10. The week attracted more than 450 attendees, who had the opportunity to hear from 36 inspirational women, across ten events, three workshops and a pop-up shop in Victoria.

For those unable to attend, the #IamVisible hashtag on Twitter made headlines, when VW was named a top tweeter for equality by The Independent, reaching 259,290 unique users over the course of the week.

But our work doesn’t stop there. Girlguiding UK released a survey last year that linked a lack of positive female role models to girls growing up with limited aspirations. More than 50 per cent of those surveyed concluded that there was a lack of inspirational women for them to aspire to. Only 17 per cent of professionals within technology are women and only 6 per cent of engineers in the UK are female.

The Visible Women Campaign believes role models are key and that mentoring will also help to improve the status quo. There are so many women out there that the media would rather choose to ignore. But we are reclaiming what it means to be a role model by putting the spotlight back on those who can have a positive impact in raising aspirations and attainment levels of young women and girls. This is especially important because as many as 50 per cent of young women aged 18 to 24 are keen to start a business, according to a report by Sage UK.

By summer 2013, we want to help 100 young female entrepreneurs start their own businesses by providing them with start-up capital, training and mentors as part of the Department for Business, Innovation & Skills’ start-up loan scheme for entrepreneurs.

We can’t do it alone, so we are looking for inspirational women in business to come on board as mentors in our 100 Women Campaign.

If you are passionate about supporting a budding entrepreneur, can commit to a meeting once a month and maintain regular contact via email/phone for six months, then we would like to hear from you. You do not need to be a business owner to be a mentor, but you should have an awareness and familiarity around the challenges that a small business might face.