Vehicle-to-grid infrastructure, also known as V2G, can transform electric vehicles into energy storage assets for utilities, helping them balance the national grid at times of peak demand. Adoption of the technology has so far been slow, however a new $16-million V2G project being rolled out in the United States this year by Dominion Energy could prove its commercial viability.

The utility company plans to connect 50 battery-powered school buses in 16 different districts in the state of Virginia with V2G infrastructure. By 2025 they hope to scale to 1,500 vehicles.

The objective of the project is to use the electric buses as a grid resource, where Dominion Energy can store and draw energy from when needed, while also achieving cleaner air for schoolchildren and reduced operating costs for local governments.

Before embarking on the project, Dominion Energy’s innovation team analysed the use patterns of some of Virginia’s 13,000 school buses. They quickly realised the vehicles were a good fit for the V2G concept because of their predictable usage, down to hours or even minutes.

“The unique profile of electric school buses, where they park, the hours they operate and the miles they run, means much of the electric battery capacity isn’t needed much of the time, creating a great opportunity for shared battery use,” says Mark Webb, senior vice president and chief innovation officer at Dominion Energy.

According to Webb, the V2G system will operate as follows. At the end of the school day, buses will be returned to their depots and plugged into V2G chargers. Once connected, via a digital platform, Dominion Energy can charge the batteries, which takes around three-and-a-half hours, at the most optimal time, which means the company doesn’t need to build additional capacity to the grid to support extra demand. When the energy is needed, which almost exclusively will be in the summer when the buses are idle, a signal can be sent to take power into the grid.

Dominion Energy has investigated specific depots where the buses may be parked and what benefit the batteries could bring to the nearby energy distribution network, as well as what upgrades are needed to adapt local systems.

In most cases, a transformer upgrade or increase will be required, with the electric connections being fed underground, while charging points are mounted above ground.

Bidirectional energy flows will be managed through a digital platform by Proterra called APEX that will eventually be expanded into a new system to manage all the company’s distributed assets, including solar and wind generation.

Weighing the cost vs the benefit

The electric buses cost approximately $325,000, however Dominion Energy will provide the vehicles to schools at a comparable cost of a diesel equivalent, around $100,000. Schools will be selected based on the value of the batteries to the local grid. Dominion Energy will own and be responsible for the upkeep of the batteries and the V2G infrastructure.

The first 50 buses are expected to be delivered by the end of the year. This additional infrastructure will help Dominion Energy better integrate renewable energy, in particular a new 2.6-gigawatt offshore wind project it is developing, by providing more flexibility for the grid.

“Offshore wind will produce more electricity to the grid primarily in the evening, afternoon or night time; with this programme we can charge the electric vehicle batteries when those renewables produce energy and have the flexibility to use it when we need it. This helps stabilise the distribution grid for voltage levels and other factors,” says Dan Weekley, vice president of innovation policy and development, at Dominion Energy. 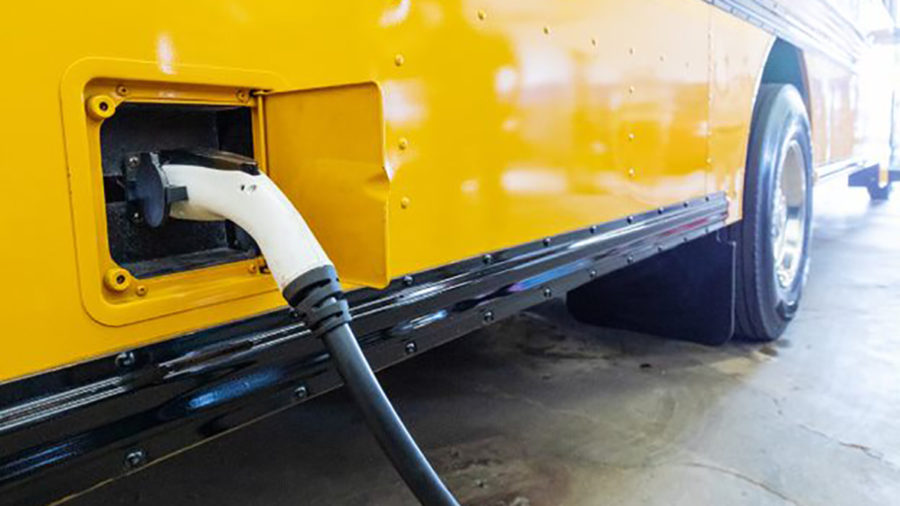 For V2G to provide real benefit to the utility company’s grid management, however, it needs to be scaled up significantly, says Weekley. Hence the target of 1,500 buses by 2025.

This number of V2G enabled school buses can provide almost 350 megawatts of power that can serve around 15,000 residential homes for approximately four to five hours a day and carry the company over peak periods in summer, he explains.

Dominion Energy is absorbing the cost of the first 50 buses and accompanying infrastructure, but future investments in the programme will be paid for by its customers, costing around $1.25 a month for each bus.

This is, however, contingent on approval from the energy regulator which has to examine the cost versus the benefit. Though the company is confident the necessary legislation will pass due to the air quality gains inside the buses, which will be six times better compared to non-electric models, and because the new buses, according to estimates, are 60 per cent cheaper to operate saving municipalities up to $8,000 a year.

“This project is unique and has been very popular because the environmental benefits, particularly for tailpipe emissions and those inside the school buses, are tied to the localities we serve and will go directly to our customers’ kids,” says Weekley.

Webb adds that the success of the programme could see similar projects rolled out in other states, starting with South Carolina.

Indeed, over time, V2G is expected to become more prevalent and could even generate revenue opportunities for electric vehicle fleets, such as taxis, or for owners of electric cars by selling energy back to the grid. Ovo Energy, ENEL X North America and EDF Energy are already running trials, while the Nissan Leaf is the first electric car to offer bidirectional charging.

However, Webb thinks electric cars are the “last horizon” of opportunity for V2G technology because the variables, such as usage and charging location, are less controllable.

“It will work eventually with the right algorithms, but for now we think school buses and other similar fleets with clear patterns of use represent the best opportunity,” he concludes.