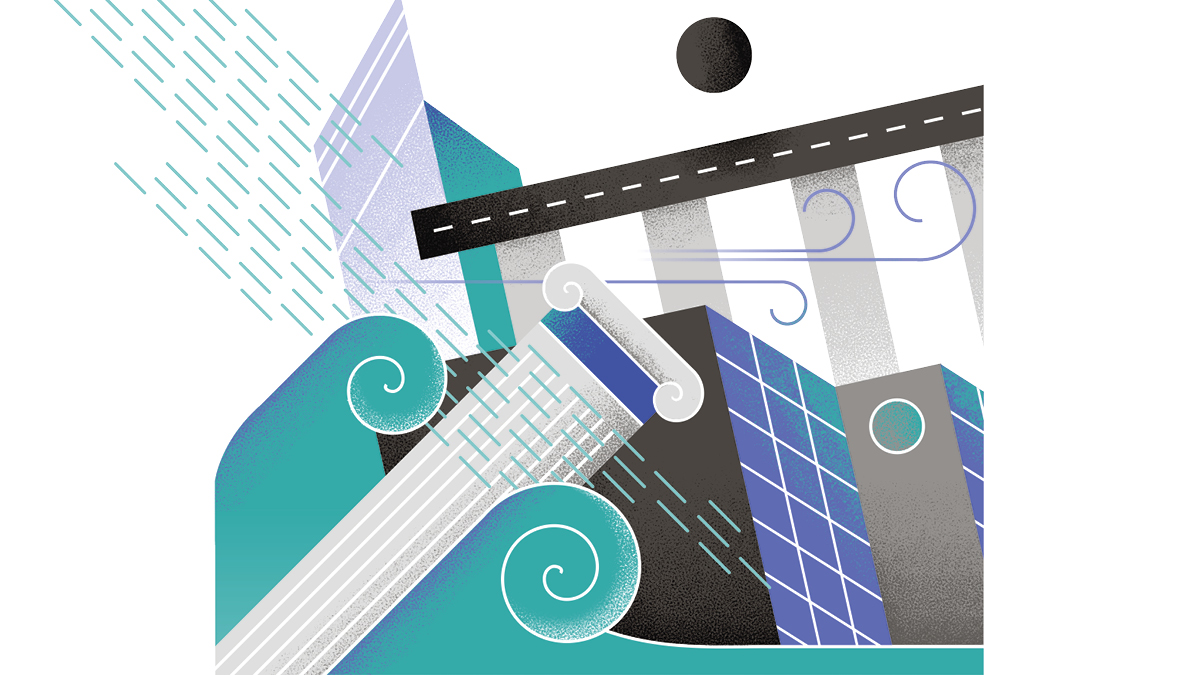 Extreme weather has been breaking records and writing headlines across the UK in 2020, as the country endures the double-whammy impact of storms Ciara and Dennis. Images have flooded our screens almost daily of residents evacuated by boat and sodden furniture submerged in abandoned homes.

Infrastructure, though, is arguably the big story seldom told, says Simon Crowther, founder of Flood Protection Solutions and himself a victim of flooding as a teenager in 2007. “Flooding is the biggest threat the UK faces as a result of climate change,” he says. “Yet the response is often reactive rather than proactive. While media attention is usually on those directly affected with flooded homes and businesses, when critical infrastructure is at risk, devastation can be huge.”

Infrastructure is woven throughout the fabric of our society and essential services soon start to unravel in extreme weather, especially following disruption due to surge tides and flooding, explains Dr Andrew Russell, senior analyst at the Committee on Climate
Change (CCC).

“Risks to communities and local economies are closely linked to resilience of local infrastructure, in particular energy, transportation and communications systems. Electricity sub-stations, road and rail networks, water treatment works, ports and airports, plus fixed-line and mobile communications assets, are all exposed to increasing flood risks,” he says.

The CCC advises the UK government on emissions targets and reports to parliament on progress made. Across all infrastructure sectors, it has warned that the number of assets and networks exposed to significant levels of flood risk could double by the 2080s.

Furthermore, in its recent report looking specifically at coastal risks, the CCC identified 1,600km of major roads and 650km of railway line, and no fewer than 92 railway stations and 55 disused landfill sites, all at 0.5 per cent or greater risk of flooding or erosion by the end of the century.

Flood risk for insurers and investors

For insurers, the numbers are not just big, but different. Market players reliant on traditional catastrophe models that fail to consider forward-looking climate risk are finding the past no longer provides an accurate guide to the future, says Emilie Mazzacurati, founder and chief executive of Four Twenty Seven.

As a publisher of climate data for financial markets, Four Twenty Seven risk-scores infrastructure assets, such as pipelines and highways. It sees investors increasingly expressing concern over climate risk and engaging with operators around their preparedness, with financial implications, says Mazzacurati.

“For municipalities seeking infrastructure financing, this can catalyse policies around ensuring new projects consider climate risk. For example, the province of Ontario in Canada requires all cities to integrate climate vulnerability into their infrastructure planning, which can help minimise costs over time,” she says.

While major UK infrastructure providers are making progress boosting resilience of existing and future assets, applications of nature-based solutions, such as floodable parks, can work at a landscaping scale and will also appeal to investors, says Bram Miller, technical director at Ramboll.

“As investment decisions will increasingly be evaluated in terms of natural capital, this may well drive uptake of more nature-based solutions,” he says. “Green infrastructure can not only help manage flood risks, but also bring added benefits such as biodiversity net gain, carbon sequestration and public-amenity uses.”

Defined as the totality of world stocks of natural assets, including geology, soil, air, water and living things, natural capital effectively covers everything from mountains to fish. The Office for National Statistics has estimated its value to the UK economy at almost £1 trillion.

Much more can be done, however, to leverage potential benefits of greening the built environment, argues president of the European Federation of Green Roof and Wall Associations Dusty Gedge.

“We need new models and awareness within the construction industry around dealing with water at source. Buildings are responsible for a lot of rainwater, which green infrastructure in the form of living roofs and walls can help manage,” says Gedge.

The road ahead points towards adaptability, rather than resistance. Crowther concludes: “There has been a general shift within the flood protection industry to work with nature, rather than against it. We can’t keep building higher and higher walls.”

Originally home to 27,000 people, Nahr el-Bared Palestinian Camp in north Lebanon was destroyed during a three-month conflict in 2007. Its reconstruction, now 70 per cent complete, represents the largest single such project ever undertaken by the UN Relief and Works Agency (UNRWA).

Of the original population of approximately 6,000 Palestinian refugee families displaced, almost 5,000 are registered to return. The total UNRWA budget is $329 million, with a further $51 million still required.

Such was the destruction, all planning had to start from scratch. This provided an opportunity to redesign the 200,000sqm camp with a full infrastructure solution comprising sewerage, stormwater and water-supply networks, future-proofed against flooding. The sewerage network has also been connected to a treatment plant in Tripoli, ending direct discharge into the Mediterranean Sea.

Of many infrastructure lessons learnt, one stands out, concludes UNRWA project manager John Whyte. "Water in all its forms is a critical climate-risk factor for the reconstruction,” he says. "Whether we are talking sewerage, stormwater or water supply, it is a matter of environmental justice in the face of extreme weather events that the infrastructure is designed to future-proof the homes and livelihoods of the thousands of families and multiple generations living here.”