A new breed of human is on its way. Transhumanists are a group who seek to accelerate the evolution of humanity through science and technology. Oliver Pickup investigates the movement, the implications for humankind and asks, is it morally wrong to augment humans? 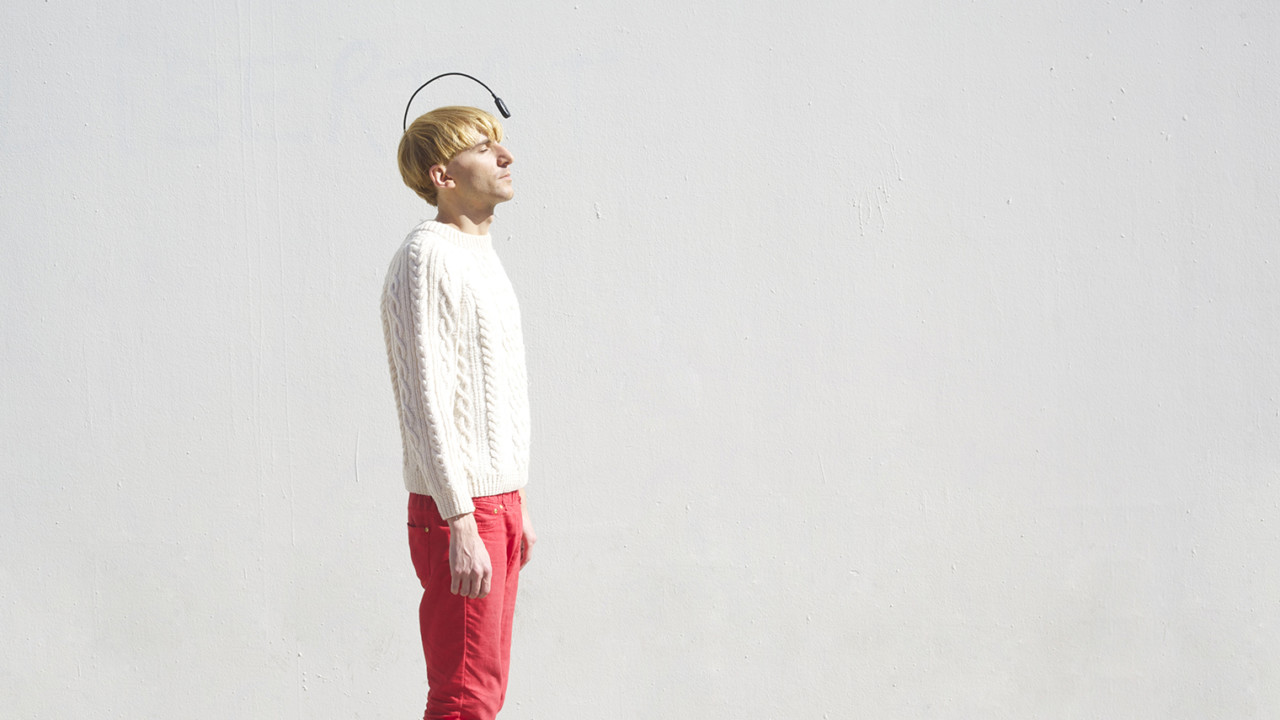 The world’s preeminent ‘cyborg artist’, Neil Harbisson (pictured above), has been stopped “several times a day, every single day, since March 22, 2004”. It’s impossible for him to forget the date: that Monday, 13 years ago, he had an antenna fixed to his skull in order to ‘hear’ colour. The attention generated by the unique appendage can be “really tiring”, London-born Harbisson admits to Raconteur. But, he believes, such sights will be the norm, and sooner rather than later thanks to the inexorable march of technology.

“Initially people questioned whether my antenna was a reading light,” says the 34-year-old, who sees in grayscale but can sense colours (the majority of which are beyond the visual spectrum) 360 degrees around him through audible vibrations. “By 2005 those who approached me thought it was a microphone; in 2007 most reckoned it was a hands-free device; and the following year a lot of them suggested it could be a GoPro camera. In 2012 the top guess was something to do with Google Glass, and more recently a selfie stick has been popular. Lately, people shout ‘Pokémon’ at me.”

Similarly, officials at Her Majesty’s Passport Office didn’t quite know what to make of Harbisson’s antenna to begin with. “On the photograph I submitted I argued that it was not electronic equipment but a new body part, and that I felt that I was a cyborg, a union between cybernetics and organism,” he continues. “I’m not wearing technology; I am technology. It doesn’t feel that I’m wearing anything, it’s just an integrated part of my body; it’s merged with my skull so it is part of my skeleton. There is no difference between an arm, my nose, an ear, or my antenna. In the end, they agreed and allowed me to appear in my passport photograph with the antenna.”

Harbisson had no real issue adjusting to sleeping with an antenna atop his head, but there were other teething problems. “As I had become taller, at the beginning I would bump into doors upon entering cars, and get stuck in branches of trees,” he says. “And I would struggle to put jumpers on. I had to become used to the organ, the body part, as well as get used to the new sense, and it took a while. Having a new sense is something that most people have never experienced. It transforms your life because you perceive absolutely everything differently.”

Moon Ribas, Harbisson’s Catalan partner and fellow cyborg artist who he met when the pair studied at Dartington College of Arts in Devon, has two implants in her arms that allow her to perceive the seismic activity of the Earth and the Moon. Formerly, she warped her vision for a three-month period by using kaleidoscope glasses, and would wear earrings that quivered depending on the velocity of people moving behind her.

For fun, the out-there couple enjoys linking to satellites using NASA’s live feed from the International Space Station. “Instead of using my eyes to see the images, I simply connect the antenna to the data that comes from the satellites, and then I receive vibrations in my head, depending on the colours,” Harbisson says. “They have so many sensors in space that are collecting data, but no-one is actually looking at it. I feel I’m a ‘sensestronaut’ or a ‘mindstronaut’ because my senses are in space while my body is here on Earth.”

Mindstronauting aside, it’s been a busy year for Harbisson, and a significant one for the future of humanity, with cyborgs in the ascendancy. At March’s South by Southwest – the annual conglomerate of film, interactive media, music festivals and conferences held in Austin, Texas – Harbisson, Ribas, and BorgFest founder Rich MacKinnon presented a draft of the declaration of cyborg rights and also introduced an accompanying flag “which you can only detect if you can sense infrared”.

“We believe it should be a universal right for anyone to have a new sense or a new organ,” argues Harbisson. “Many people can identify strongly with cybernetics without having any type of implant, and there has been a lot of support. There may even be a ‘cyborg pride’ parade in Austin next year.”

Additionally, in February his startup Cyborg Nest, co-founded with Ribas in 2015, began shipping its first product, North Sense – a $425 DIY embeddable device that gently vibrates when the user faces magnetic north.” (Mind-boggling pipeline projects, kept under wraps, reportedly include silent communication using Bluetooth, a pollution-detecting device, and eyes in the back of the head.)

Cyborg Nest is just one of a growing cluster of ‘biohacker’ startups offering a variety of sense-augmenting implants, with body enhancements, prosthetics and genetic modifications are increasingly popular. Pittsburgh-based Grindhouse Wetware, for instance, has been developing ‘implantables’ since 2012, such as Circadia, a device that sends biometric data wirelessly via Bluetooth to a phone or tablet, and Northstar, which allows gesture recognition and can detect magnetic north (as well as the rather gimmicky feature of mimicking bioluminescence with subdermal LEDs).

What does it mean to be human? The answering of this existential puzzler has powered progression for millennia, but now, as nascent technologies fuse physical, digital and biological worlds, it has never been more complex, and critical, to define the age-old question. Alarmingly, we are hurtling inexorably towards the ‘singularity’ – a hypothetical point when artificial intelligence advances so much that humanity will be irreversibly disrupted. But, in fact, the migration from man to machine has already started.

Entering ‘Sir Tim Berners-Lee’ – the Briton who created the World Wide Web 28 years ago – into a Google search throws up almost 400,000 results. That figure is almost six times fewer than ‘transhumanism’, a movement few have heard of, yet one which is beating the heart of progress, albeit beneath the radar.

The touchstone definition from a 1990 essay by Dr. Max More, the Oxford University-educated chief executive officer of Arizona-based Alcor Life Extension Foundation, states: “Transhumanism is a class of philosophies of life that seek the continuation and acceleration of the evolution of intelligent life beyond its currently human form and human limitations by means of science and technology, guided by life-promoting principles and values.”

A raft of tech billionaires are considered either ‘de facto transhumanists’ or are fully signed up to the movement. Luminaries include Peter Thiel, the PayPal co-founder and Facebook’s first professional investor worth an estimated $2.7 billion by Forbes, Elon Musk, of Tesla Inc. and SpaceX fame, Google co-founder Sergey Brin, and – according to H+Pedia (an online resource that aims to “spread accurate, accessible, non-sensational information about transhumanism”) – Facebook’s CEO Mark Zuckerberg.

Dr. Anders Sandberg, a research fellow at Oxford University’s Future of Humanity Institute, suggests that transhumanism “questions the human condition”, and tells Raconteur: “It is in many ways a continuation of the humanist project, seeing human flourishing as a goal, but recognising that human nature is not fixed. Rather than assume it is all going to be an entropic mess, transhumanism suggests that many serious problems can be solved and that we do have a chance for a great future.”

There are practical, utilitarian, reasons why submitting one’s body to technology makes sense – at least to Dr. Sandberg and his fellow transhumanists. “Consider that the Government spends £85.2 billion on education every year; even a slight improvement of the results would either be a huge saving or enable much better outcomes,” he continues. “One intelligence quotient (IQ) point gives you about a two per cent income increase, although the benefits would be even broader across the whole of society if everybody got a little bit smarter.

“Childhood intelligence also predicts better health in later life, longer lives, less risk of being a victim of crime, more long-term oriented and altruistic planning – controlling for socioeconomic status, etc. Intelligence does not make us happier, but it does prevent a fair number of bad things – from divorce to suicide – and unhappiness.”

While Dr. Sandberg suggests that the aforementioned DIY ‘grinder’ self-surgery movement “problematic” he is “firmly in favour of self-experimentation and bodyhacking”. He flags up the apparent triumph of Elizabeth Parrish, CEO of Seattle-based BioViva, who in September 2015 underwent what her company labelled “the first gene therapy successful against human ageing”; it was claimed that the treatment had reversed the biological age of Parrish’s immune cells by 20 years.

The Swede is also optimistic about the prospect of ‘mind uploading’, or ‘whole-brain emulation’, as he prefers to call it. He acknowledges that the enabling technology is “decades away” but believes we could “become software people with fantastic benefits: no ageing; customisable bodies; backups in case something went wrong; space travel via radio or laser transmission; and existing as multiple copies.”

Little surprise, then, that Dr. Sandberg is keen on ‘cryonics’ – the deep-freezing of recently deceased people in the belief that scientific advances will revive them – and is fully signed up for Dr. More’s Alcor, the largest of the world’s four cryopreservation facilities. It currently houses 117 ‘patients’, who are ‘considered suspended, rather than deceased: detained in some liminal stasis between this world and whatever follows it, or does not,’ Irish author Mark O’Connell writes in To Be a Machine on the subject of humans of the future.

For Dr. Sandberg, the $200,000 cost of whole-body perseveration is justifiable as it would be “irrational not to” take the negligible odds that technologic advances will revive him, at some point. “Sure, the chance of it working is small – say five per cent – but that is still worth it to me,” he says. “And after all, to truly be a human is to be a self-changing creature.”

Is it morally wrong to augment humans?

David Wood, chairman of London Futurists, counters that question by firing a cluster of his own, asking Raconteur: “Is it morally wrong to teach people to read, or vaccinate people? Is it morally wrong to extend people’s lives by using new medical treatments, or seek a cure for motor neurone disease, or cancer, or Alzheimer’s? They are all forms of augmentations.”

Having warmed up the Scot, who spent eight years studying mathematics and then the philosophy of science (specialist subject quantum mechanics) at Cambridge University, he says: “Recall the initial moral repugnance expressed by people when heart transplants first took place. Or when test-tube babies were created, or when transgender operations were introduced. This moral repugnance has, thankfully, largely subsided. It will be the same, in due course, for most of the other enhancements foreseen by transhumanists.”

Wood, a science-fiction lover from childhood, was switched on to transhumanism “in the early 2000s”, after reading The Age of Spiritual Machines, a seminal book written by futurist Ray Kurzweil, who would later be personally hired by Google co-founder Larry Page “to bring natural language understanding” to the organisation. Famously, the American author has predicted that the ‘singularity’ is on course to happen in 2045, though many critics dismiss his forecast as fanciful and dogmatic.

We could become software people with fantastic benefits

Regardless, transhumanism is on the rise in Britain. “The UK Transhumanist Association (UKTA) used to half-jokingly refer to themselves as ‘six men in a pub’,” says Wood, who in July 2015 co-founded H+Pedia “The UKTA was superseded, in stages, by London Futurists – which covers a wider range of topics – and we now have over 6,000 members in our Meetup group.”

So, what does the near future hold for humanity?

“Transhumanists anticipate transcending the limitations which have been characteristics of human experience since the beginnings of Prehistory: ageing; death; and deep flaws in reasoning. Maybe once that happens, the resulting beings will no longer be called humans.”