The obvious parallel is with the laser. When the laser was invented it generated coos of admiration, but also a general scratching of heads over what to do with the miracle product. Ultrafast internet is another breakthrough in search of a use. The latest speeds are mesmerising. Superfast starts at 24 megabits per second (Mbps), the official UK minimum for that nomenclature. From there the speeds go up in orders of magnitude.

Rural provider Gigaclear offers 900Mbps to select locations in the UK. In Romania, the speed kings of Europe, 1,000Mbps, or 1Gbps, is standard and costs about €11 a month. Then there’s South Korea, the world champions. SK Telecom is set to install 2.5Gbps connections, a hundred times faster than so-called UK superfast. Next year: 10Gbps.

And that’s just the fixed-line speeds. The new 5G mobile networks will put 1Gbps speeds on your smartphone, potentially rising to 10Gbps.

How ultrafast internet can be used for business

Phew! So what are the applications for businesses? Obviously the same tasks will be done the same way, but faster. A Blu-ray movie can be downloaded in eight minutes at 1Gbps, down from 2.5 hours with a copper-wire connection. A medium-sized corporate server can be restored in a little over an hour, compared with 28 days before.

But that’s not the point. Faster speeds unlock new behaviours. Businesses can share data between remote facilities in near-instant fashion. For example, ProLabs is a connectivity hardware manufacturer with production facilities in Gloucestershire and California.

Anthony Clarkson, chief technology officer of ProLabs, says: “Having ultrafast fibre connectivity has enabled our group to harmonise production by instantly sharing data, such as test reports and production templates, which are key to the production facility. This allows significant operational savings. None of this would have been possible on a traditional copper internet connection.”

Even the finance team benefit. “Consolidated group reporting is easily achievable and synchronisation of databases which once took place overnight are now instantaneous, enabling the two plants to operate continuously without any downtime,” says Mr Clarkson. 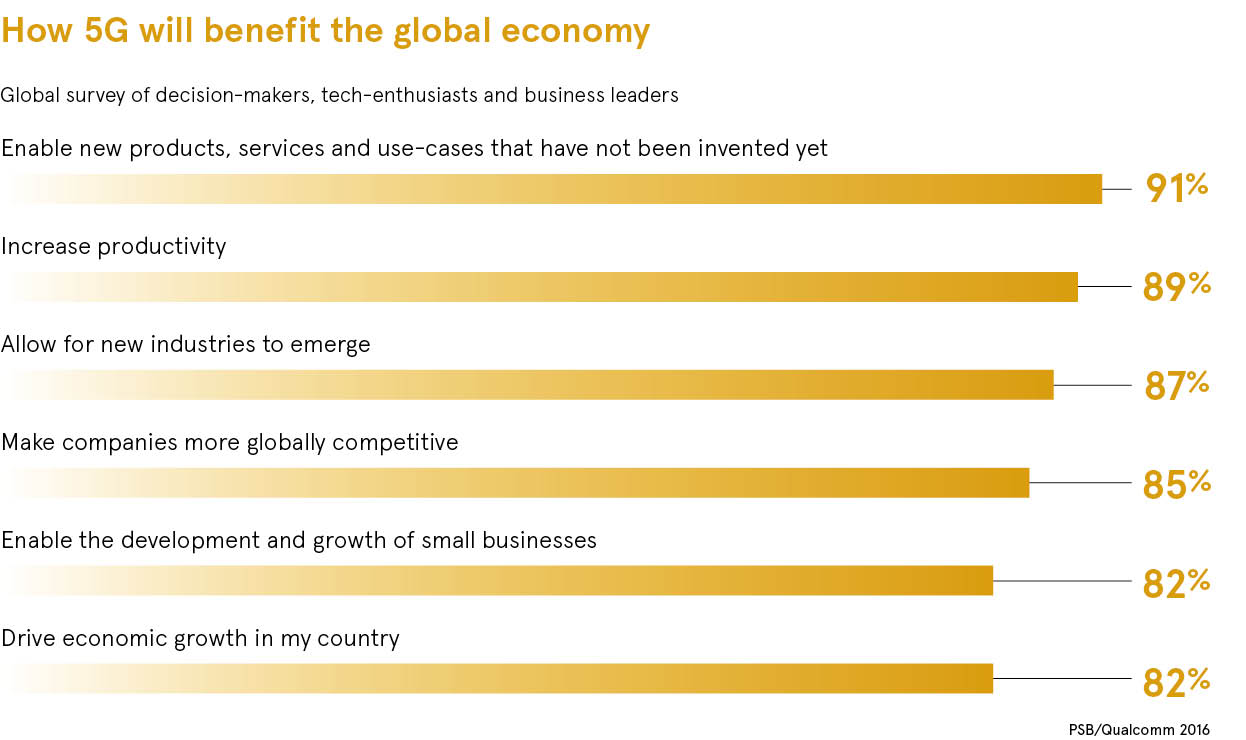 Using ultrafast internet to save lives

Australian telco Telstra is truly imaginative in dreaming up usages. Håkan Eriksson, chief technology officer, predicts 5G-enabled drones will save lives in the ocean. A drone will take high-resolution video footage of the water, and use artificial intelligence to recognise people and objects. The speed of connectivity means the drone can act as a communications hub with the emergency services and tap into third-party computing power to improve performance.

Speed is also accompanied by lower latency: 20 milliseconds now, but 1 millisecond with 5G. This opens the door to reaction-sensitive actions such as remote surgery. Haptic feedback gives surgeons a real sense of how flesh responds to pressure from scalpels and needles. With ultrafast internet, a surgeon in Melbourne will be able to operate on a patient in a rural clinic.

Driverless cars will benefit tremendously. They will use fast networks to communicate with the cities around them, as well as other cars. Vishnu Sundaram, vice president of telematics at Harman International, says: “Autonomous vehicles will need to be fitted with a wide range of sensors designed to substitute our eyes, ears and tactile senses. Such sensors will generate massive amounts of data that needs to be communicated to other vehicles and the road infrastructure network. This data must be communicated in real time to allow vehicles to make the split-second decisions needed to ensure passenger safety.”

He believes 1Gbps is the minimum needed to make driverless cars work in harmony with the world around them. 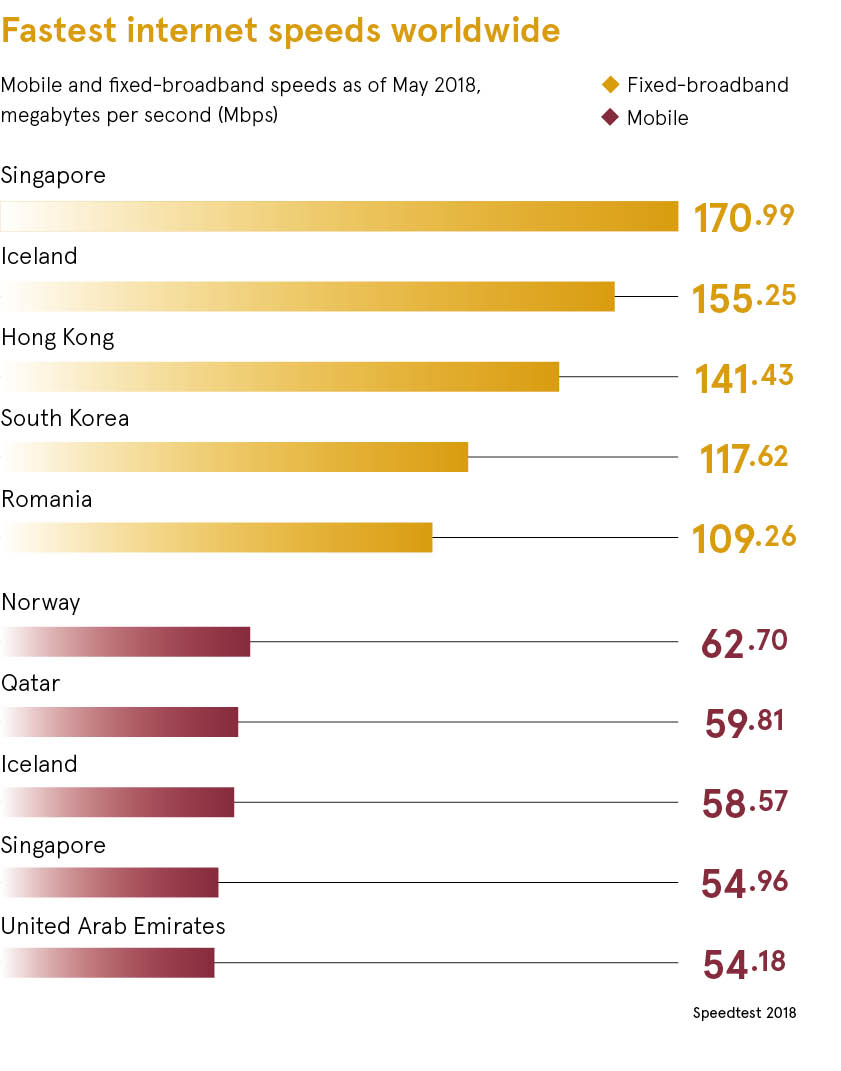 Ultrafast internet speeds mean data can be collected and processed from commercial hardware where data is currently collected in vast volumes. For example, a Pratt & Whitney geared turbofan engine generates 10 gigabytes of data per second. A twin-engined plane will generate 844 terabytes for a 12-hour flight. That quantity is physically impossible to transmit for analysis during ground time with current broadband speeds. 5G connectivity will enable at least some of the data to be sent for analysis. In this case even the fastest speeds on offer are too slow for the job at hand.

Virtual reality (VR) video-providers will be able to stream footage to headsets. “Latency is one of the biggest roadblocks to this application of VR,” says Duncan Potter, senior vice president at Arris, a network equipment marker. “Even with networks operating at the speed of light, a delay greater than 15 milliseconds can cause travel sickness-like symptoms.”

Overall, we’ll be immersed in a world where all devices can communicate with each other with little or no restrictions on data exchange. Will Cavendish, global digital lead of Arup, an engineering consultancy, puts it this way: “5G will allow us to do away with clunky IT kit, and allow us to seamlessly integrate things like video, mixed reality and AI on any device, anywhere, whenever we want. Anything needing reliable, high-speed connectivity to the internet today via fixed cabled connection will be disrupted.”

The way forward is ultrafast

Doctors will conduct remote examinations via high-definition screens. Researchers will exchange vast datasets, such as 7 terabytes uncompressed human genome files, in a mere 39 hours, down from 33 days. CCTV quality will improve with no low bitrates to save on data transmission costs to cloud storage.

A report for Vodafone by consultants Arthur D. Little, entitled Creating A Gigabit Society, looks at how the national energy infrastructure will be transformed by ultrafast internet speeds. It says: “A smart network identifies grid stability issues and takes appropriate action in real time by analysing the data that originates from the two-way communications infrastructure.”

The next question is which nation will be first to see all these improvements. The UK is currently a laggard. “Sweden is coming from the future, it’s 15 years ahead of the UK,” says Mikael Sandberg, executive chairman of VX Fibre, a Swedish fibre telco. “Sweden is set to achieve 98 per cent nationwide gigabit-speed connectivity to homes and businesses. To put this into perspective, the UK currently has less than 4 per cent penetration.”

Which is a rather dismal note to end on. The UK can achieve wonders with faster internet speeds. But only if we install the kit in the first place. 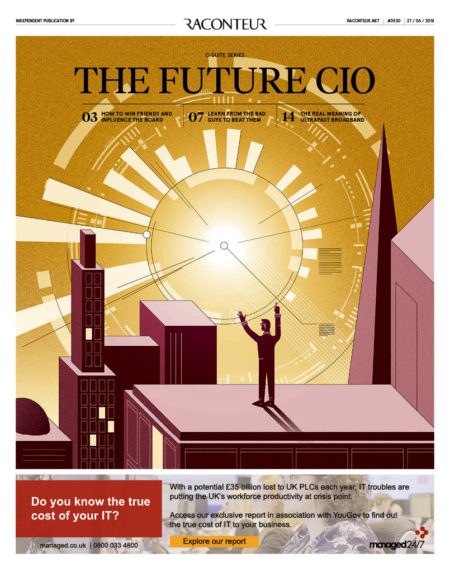 How ultrafast internet will transform business

Hacking back: is it a good idea?

What is the role of a CIO today?