One of the most effective ways to engage employees and retain high performers, as the global competition for talent continues to mount, is to provide learning and development

It may sound too good to be true, but experts believe there is a clear causal link between training provision, staff engagement and retention levels.

In fact, according to Tania Lennon, head of leadership and talent at people and organisational advisory firm Korn Ferry Hay Group (KFHG), providing access to learning and development (L&D) can improve retention rates by as much as 12 per cent, although other factors such as workers’ relationship with their line managers also come into play.

A survey, entitled Best Companies for Leadership, conducted by the firm among 17,000 employees across 2,100 organisations around the world revealed that 65 per cent believe L&D enhances both feelings of engagement and the wider organisational climate. The figure jumped to 85 per cent among the 20 highest performing companies.

Employees expect the company to invest in them, and they give back in terms of better productivity and innovation

“The situation has two faces – the enabling face, which is ‘do I feel the organisation is equipping me for success and providing me with the necessary tools, skills and capabilities?’ and the engaging face, which is ‘to what extent do I feel valued and invested in?’ and both make a difference,” Ms Lennon explains.

Interestingly, 59 per cent of those questioned also said L&D provision improved customer satisfaction levels as staff felt themselves better equipped to deal with their requirements. 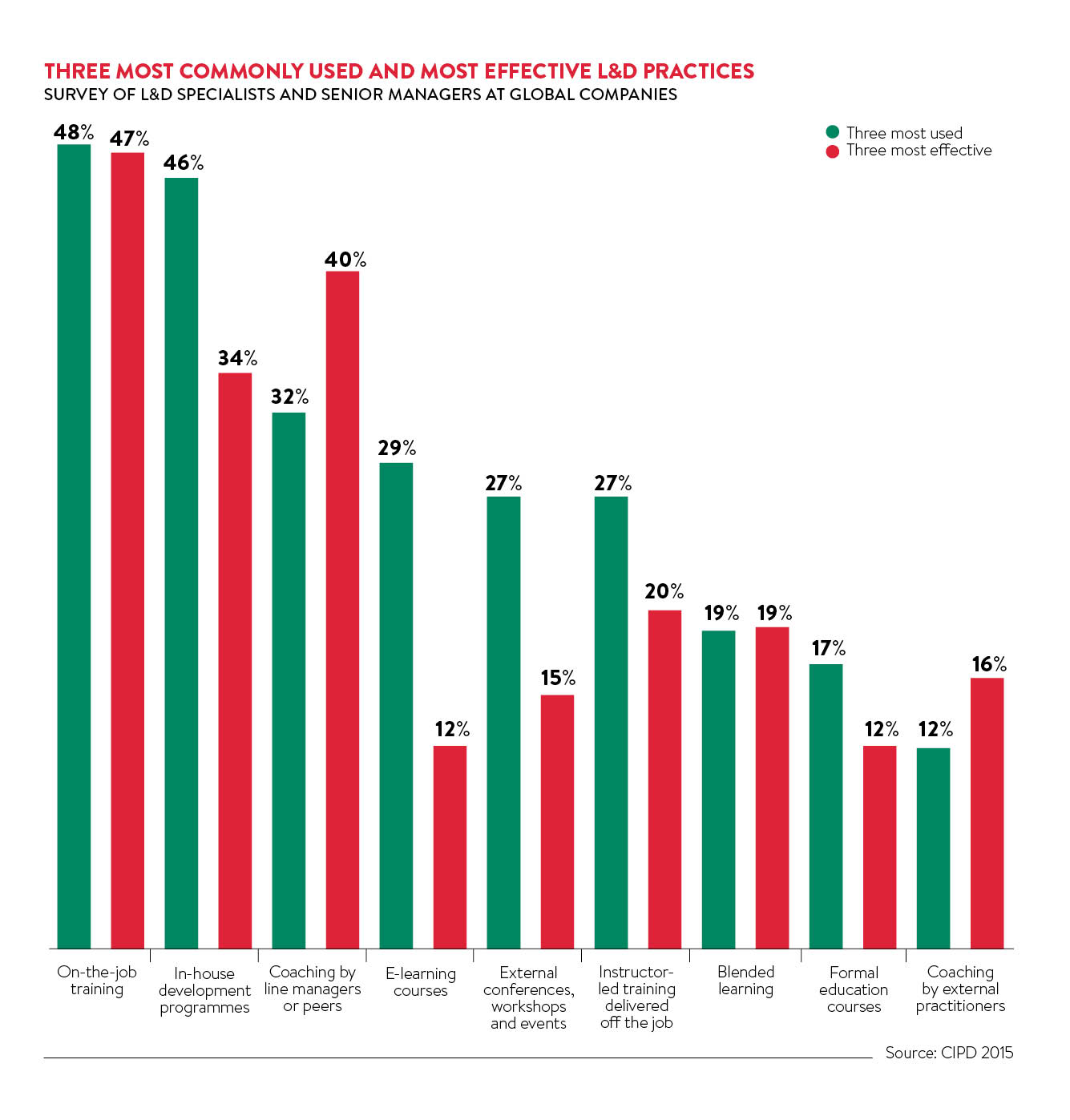 Dimple Agarwal, global organisation transformation and talent leader at management consultancy Deloitte, agrees that L&D has an important role to play in the “psychological contract” between an employer and their workers.

“Employees expect the company to invest in them, and they give back in terms of better productivity and innovation – and good learning companies have found there’s a direct correlation between the two,” she says.

Spending on the up

As to how much money is being invested in L&D during these times of austerity, the picture actually looks quite positive. About half of those surveyed by KFHG said their budgets had increased by either a lot or a little over the last year, while 26 per cent said they had stayed the same – figures that imply most organisations understand the value of such activity.

In terms of where they are spending this money, the key focus tends to be on leadership development for managers and people in supervisory roles, followed by sector or industry-specific training to try to close skills gaps.

Although Ms Agarwal points out that spreading expenditure too thinly across the entire workforce is still a common mistake. Instead it is much more effective to invest in a very targeted way by developing skills in areas where future growth is most likely to come from. “I don’t think more money needs to be spent as such. It just needs to be spent differently,” she says.

As for leadership development, KFHG’s Ms Lennon says that most companies are doing well in providing L&D for newly recruited high performers and employees with high potential. But the picture is much less rosy in relation to supporting and preparing internal staff for promotion or internal transfers, for example by offering them relevant assignments or projects in advance. This is despite the proportionately high costs of recruiting new personnel and waiting for them to come up to speed.

A further challenge is that, while senior executives may pay lip service to staff development in a broad sense to underpin long-term business growth, the pressure put on middle managers to hit short-term targets often means they simply feel unable to take time out of their daily routine to actually do it.

But as the world of work continues to change in line with demographic shifts and a progressive move to digital, leading to more flexible working and a growing use of contingent labour such as freelancers, there is an increasing need to move from old command-and-control forms of management to new approaches based on collaboration, partnership and mentoring.

This scenario requires higher levels of strategic thinking and emotional intelligence than in the past as the focus moves to worker output rather than input, something that requires training in so-called “soft” skills, which for many are not intuitive.

Another key area in which many employers are currently falling down is in aligning L&D activities with their business goals and strategy. According to research by the Chartered Institute of Personnel and Development (CIPD), a mere 25 per cent of companies take this approach, although things are slowly starting to change. 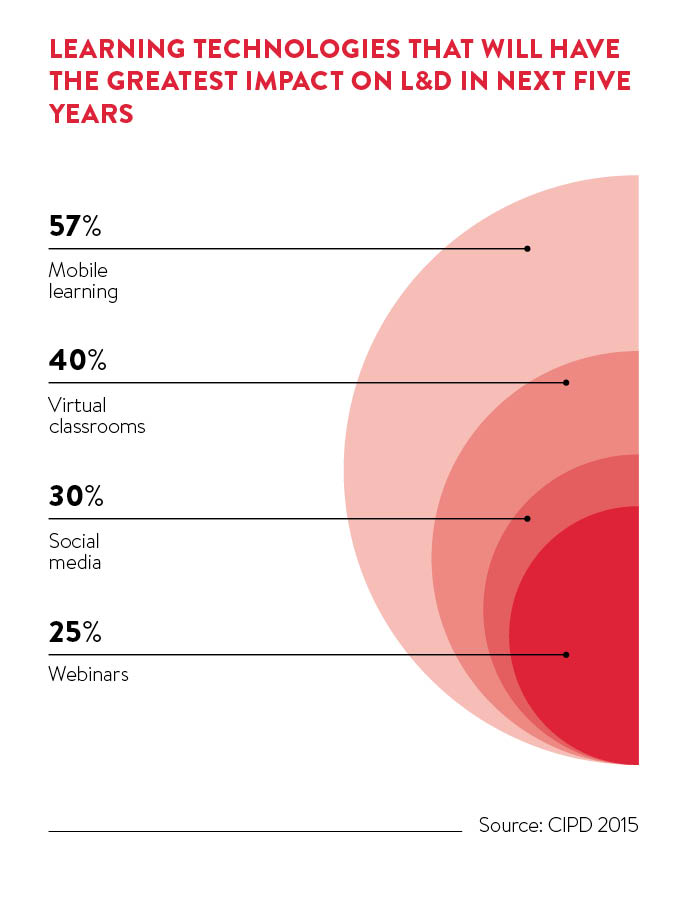 But it is an important consideration to get right because as Andy Lancaster, CIPD’s head of L&D, points out: “The closer that L&D is to business performance goals, the easier it is to measure outcomes and the more likely you are to get value for money. So if customer service employees have particular learning requirements, it becomes much easier to measure whether customer service has improved as a result of the intervention.”

An important trend here is the increasing move to integrate so-called “in-flow” learning activities such as on-the-job training, coaching by line managers and peers, and digital learning into everyday work practices on a just-in-time basis.

“These approaches tend to be very effective as they relate directly to work performance and, because the intervention can happen spontaneously, they’re more likely to have an immediate impact rather than someone having to wait to go on a course,” Mr Lancaster says.

Other increasingly popular and low-cost practices include providing a library of links to useful resources on the corporate intranet, and encouraging employees to generate their own content, for example by creating videos using their mobile phones for knowledge-sharing purposes.

Mr Lancaster acknowledges that classroom-based learning is unlikely to go away any time soon, and still has an important role to play in areas such as management training where the aim is to change behaviour and develop attitudes. But for knowledge and skills transfer, he believes that coaching and the use of digital technology, such as webinars and digital classrooms, make more sense, both in terms of cost-effectiveness  and because learners prefer it.

“One of the key trends we’re seeing is the desire for people to undertake self-directed learning, which often revolves around the fact they want to learn in the flow of work rather than go on a course. Employers are grappling to provide this in an accessible way, but it is starting to happen,” he concludes.