If you are in sales, how confident are you that your job cannot be taken by a robot? Or, if not a robot exactly, then an algorithm powered by artifical intelligence (AI)?

A seminal paper in 2013 called The Future of Employment: How Susceptible are Jobs to Computerisation? by Carl Frey and Michael Osborne of the University of Oxford should give food for thought.

Pity poor insurance sales agents, who face a 92 per cent chance of being out of a job, according to the reseaerch. Sales managers can perhaps feel a little safer as the study suggests just a  1.3 per cent chance that the role will be automated.

The answer is that AI may actually help salespeople keep their jobs by making them work more efficiently, giving them time to become subject-matter experts and helping deliver more personalised customer experiences, a key competitive advantage.

Andrew Lawson, executive vice president for Europe, the Middle East and Africa (EMEA) at Salesforce, says: “Sales teams are in high-pressure environments. They have strict targets to meet in order to drive growth and success for the company so, from my perspective, the immediate opportunity is with lead generation and sales efficiency.”

Salesforce has launched an AI-powered platform called Einstein to help. Sales Cloud Einstein analyses customer relationship management (CRM) data to learn what separates deals won from deals lost, and identifies the top leads and suggests next steps to help close that deal. Crucially, the AI can identify correlations that might have been missed by a human.

AI-powered, omnichannel sales platforms will seem as though they come straight out of science fiction

Mr Lawson says he sees the advent of tools like Einstein as giving “every employee access to their very own data scientist”.

Shashi Nirale, senior vice president and general manager (EMEA) at contact centre software providers Servion, says: “AI-powered sales analytics platforms can detect the context of a customer contact and arm the salesperson, whether a person or a machine, to suggest a ‘next best action’. This technology is creating an increasingly predictive experience, using behavioural analytics to understand patterns and predict user intent.”

One company doing this to great effect is online retailer Ocado. It has used AI and the Google Cloud Platform to help make its contact centre operate more efficiently. It is also using AI heavily in its robotic warehouses, and in forecasting just when a customer will run out of certain products so Ocado can suggest they might want to buy them again.

Ocado chief technology officer Paul Clarke says the the contact centre system was trained using a database of the messages the company has received from customers in the past and uses this to prioritise customer messages so the contact centre can respond in the best way.

There is certainly a role for AI in making sure companies respond even at the most simple level.

Leading sales AI company Conversica recently carried out a survey of the effectiveness of companies in following up leads. It contacted 538 companies across nine industries through their websites with direct, specific inquiries. One third of companies failed to respond at all.

Conversica’s AI is implemented in the form of a virtual sales assistant, which is given a name – Stephanie Jones, say – and has her (and it is usually a her) own e-mail address and phone number.

Companies then connect Stephanie to their CRM or marketing automation platform – Conversica works with almost 50 different systems – and she will then start two-way conversations with sales prospects by e-mail or SMS. She can call on thousands of different phrases that can be put together in almost limitless ways and uses personalised information to make the approaches seem less spammy. When Stephanie has taken it as far as she can and has a good lead, she hands it over to a person who can then convert the sale. 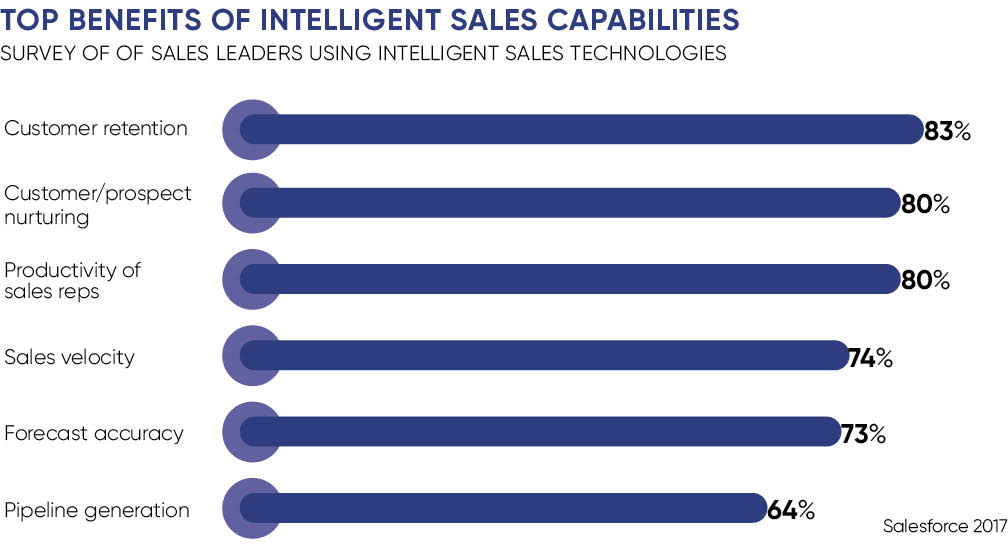 The end of the sales person?

Conversica’s chief executive Alex Terry argues that salespeople should not feel threatened by AI as technology like his company’s actually helps them do their jobs better. He claims that none of the more than 1,000 companies that have implemented the system have reduced the size of their sales function after implementing the technology.

Instead, he says, companies are recognising they can use the technology to follow up leads that would not have been cost effective in the past. He also says the technology is leading to an increasingly two-tier sales environment where new salespeople can spend more time on the phone developing their skills, while more senior sales managers can become more expert in their subject and spend less time to convert a sale.

PwC Consulting’s AI and machine-learning lead Aldous Birchall says it is the sectors most comfortable with high tech that are among the early adopters, particularly the technology sector itself and financial services.

He says that while there have been some early successes, there are AI-powered, omnichannel sales platforms coming in the next two or three years which will seem as though they come straight out of science fiction.

It may be time to hand over at least part of the work of sales to the machines. And it may be worth thinking about the experience of the Luddites. The machines did not destroy all their jobs – they created newer, more skilled ones. AI promises the same. 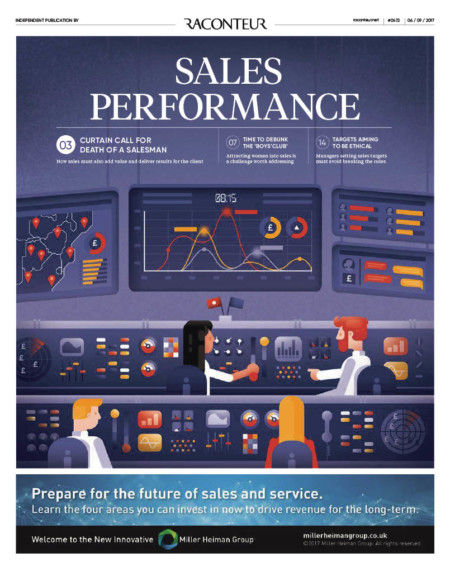 Targets should not encourage unethical sales

Curtain call for Death of a Salesman