What do Tim Martin and Tim Cook have in common? On the face of it, not a lot. Mr Martin runs a chain of pubs in the UK, Mr Cook is chief executive of Apple, the world’s biggest company by stock market value. One Tim has made his fortune selling a product that has been in existence for centuries, the other Tim has made an even bigger fortune creating technologies that have revolutionised the way we live and work.

And yet Mr Martin and Mr Cook are also both known for wearing their politics on their sleeve. Mr Martin, founder and chairman of J D Wetherspoon, was one of the most visible campaigners for the UK to leave the European Union during the referendum earlier this year. Mr Cook hosted a private fundraiser for Hillary Clinton in California. As we now know, Mr Martin found himself on the winning side, whereas Mr Cook saw his efforts come to nothing, with a heavy defeat for the Democrats.

Mr Martin and Mr Cook are part of a growing trend in global business for senior executives to play a more active and visible role in political campaigns, whether through direct backing for a presidential candidate or campaigning for or against a particular policy, such as the sugar tax or environmental levies. Many believe it was the combined efforts of big corporations that swung the Scottish referendum against independence from the UK.

But is it right for a chairman of chief executive to seek to influence a democratic process? Perhaps more to the point, is it effective in persuading employees to vote with them? And even if a chief executive succeeds, such as Mr Martin did with Brexit, what is the risk of alienating customers who disagree with your views?

There is compelling, recent evidence that a chief executive’s politics can sway how employees think about elections. A 2016 study by academics at Arizona State, Bocconi and Lugano universities showed a strong correlation among campaign contributions made by the chief and his or her employees as well as voter turnout. 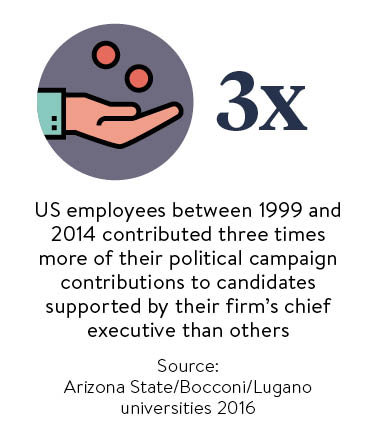 The study of 2,000 companies over US elections from 1999 to 2014 found that employees direct approximately three times more of their campaign contributions to political candidates supported by their firm’s chief executive than to otherwise similar candidates. The study also showed that employees were likely to change political allegiance to follow the lead of a new chief executive.

These findings are rooted in a US context, but given the scale and scope of the research there is no obvious reason to think that it would be significantly different in Europe, particularly given the global convergence of political and business trends. Perhaps we shouldn’t be surprised, for many employees do look to senior managers to provide leadership and guidance on significant issues.

David Palmer-Jones, chief executive of environmental services firm SUEZ, was a leading voice within the waste management industry ahead of the EU referendum, stating in public and to his staff that he felt a vote to leave could have a negative impact on the sector.

Mr Palmer-Jones says: “As chief executive I consider it my responsibility to explain, to our employees and stakeholders, the dynamics of our sector and how policy decisions, taken by politicians at all levels, influence our long-term investment decisions. Indeed, in my conversations with employees, I’m constantly asked about the implications of political decisions, macro-economics and the impact this has on the business.”

Some may argue that there is nothing new in employers using their influence to sway voters with a direct or indirect interest in their organisation. What have changed, beyond doubt, are the rules of corporate governance which have raised the bar on the degree of transparency that is required. Deals done in smoke-filled rooms over beer and sandwiches are no longer acceptable.

So, it is less about the message and more to do with the way that message is conveyed. It is about disseminating the same information to all employees, as well as to a wider group of stakeholders, including investors and suppliers, and maybe communities closely linked to the organisation. Modern communication channels make it possible for a chief executive to keep all stakeholders informed.

There must be no reason why any communication with employees should cause a company embarrassment if it finds its way into the media. It is also important for an organisation to provide a forum for those employees and stakeholders who hold different views about the outcome of an election or referendum.

Mr Palmer-Jones says: “For me, transparency and communication are essential, but it is also important that in sharing these views, we do not then cross a line by persuading or, worse, coercing employees to vote a certain way.”

A chief executive’s ability to influence a workforce will depend, to a large degree, on the relationship they have with employees. Progressive managers maintain regular dialogue with the workforce and their world view is well understood. If an organisation’s approach to internal communications is effective, it should not come as a surprise when a chief executive or chairman indicates that they believe candidate X or party Y has the policies most likely to benefit the business. It becomes much more intrusive when a management characterised by its reluctance to engage with the workforce suddenly issues a heavy-handed statement in the run-up to an election.

Tom Buchanan, managing partner of CNC, the corporate communications firm which advised a number of chief executives ahead of the referendum, says: “It is entirely appropriate that a chief executive points out the likely effect of any candidate’s agenda on their firm’s ability to succeed in business. The problem comes when they choose to express personal opinions on issues beyond this. Employees and customers may see this as overstepping a line and will react against it.”

The outlook is for a further blurring of the lines between the public and private sectors, which is likely to place chief executives in roles that will test their judgment over issues which were once the concern of politicians. With businesses running schools and prisons, for example, it seems inevitable that executives will be questioned over education policy and the criminal justice system. Their views will influence the people who work for them and will become part of the mainstream political discourse. 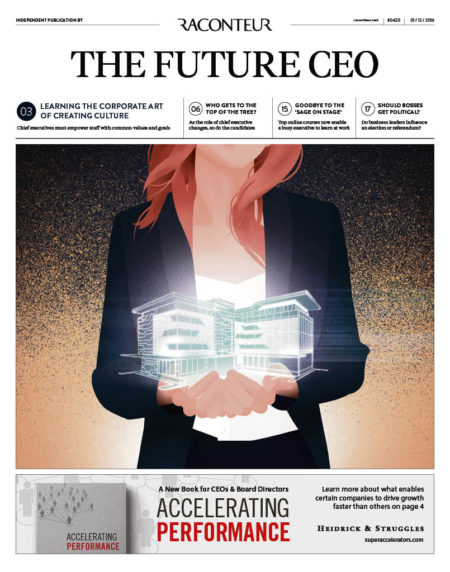 The executive education is online

Should bosses enter the political arena?

The rise of business partnerships

Also in The Future CEO