It is probably human nature to want to feel valued for doing a good job. So it should come as no great surprise that recognising positive employee performance and achievement is one of the top five means of ensuring staff remain engaged both in their role and with the wider organisation.

Samantha Gee, co-owner of boutique reward consultancy Verditer, explains: “It’s a very cost-effective way to motivate people and works more effectively than cash incentives. Recognition is about that in-the-moment noticing and celebrating people around you for doing something good – it goes to the heart of us all wanting to feel appreciated.”

This is because individuals are subject to two basic forms of motivation in the workplace: extrinsic (externally driven) and intrinsic (internally driven). Extrinsic motivation relates to material things such as the size of the employee’s salary or the prestige of the brand they work for.

Intrinsic motivation, on the other hand, relates to purpose or how meaningful the job feels, how much independence they have and mastery of their area of expertise, which is where recognition comes in.

As Ms Gee points out: “Recognition enhances trust, promotes teamwork and boosts engagement, so people are missing a trick by not doing it.”

Interestingly though, despite stereotypes relating to the infamous reserve of British leaders and managers, the UK is not necessarily the worst in terms of showing appreciation. That particular accolade belongs to Asia, which has the highest staff attrition levels in the world, according to Ilaria Gregotti, a partner at management consultancy KPMG’s people consulting business.

The hierarchical culture of many countries in the region means that “non-monetary recognition is a foreign language”, she says, whereas “the UK and US are fairly mature” in recognising achievement in other ways.

But that is still far from saying that the majority of organisations are getting it right. Ian Feaver, UK director at O.C. Tanner, which specialises in developing employee recognition and reward programmes, says: “Things are better than they were, but there’s still a long, long way to go. A lot of people think they’re doing the right thing by putting in a recognition scheme, but the education piece is often missing and it’s often not done in a meaningful way in line with core values.”

Recognition enhances trust, promotes teamwork and boosts engagement, so people are missing a trick by not doing it

Verditer’s Ms Gee agrees. “Very few companies are doing it well. Formal recognition programmes are OK, but what makes the most significant difference is when, in behaviour and culture terms, it just becomes something that everyone does,” she says.

But “everyone” does not just mean senior leaders and line managers; it means employees at every level. “It spreads so when you work around people that are good at recognition, you start doing it as well,” Ms Gee says. “Interestingly, it’s also really motivating for the giver of recognition and not just the receiver – it just feels good.” 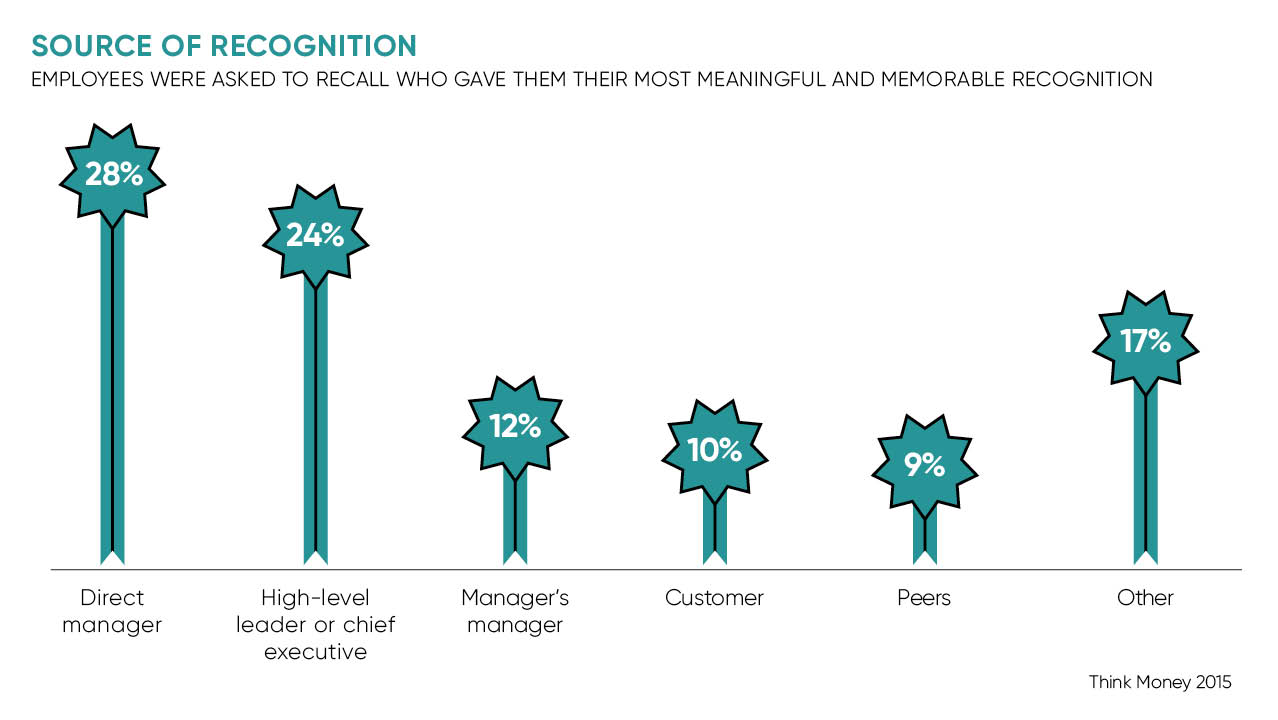 Leading from the top

Nonetheless, to embed such practices into the organisational culture, the initial impetus needs to come from the top. According to KPMG’s Ms Gregotti, there are essentially three types of recognition to consider.

The first is monetary, which involves an employee’s remuneration and benefits package. The second comprises formal institutional schemes that celebrate performance and reward results. Although these typically consist of top-down “employee of the month” kind of activities, Ms Gregotti says she is increasingly seeing a move towards peer-to-peer recognition too.

KPMG, for instance, now runs its own version of the Oscars each year, the categories of which are “linked to the company’s values of what good looks like”. Co-workers choose nominees for each category and the award is a statuette rather than money.

“It’s important to include peer-to-peer recognition as it’s more inclusive; employees know who the best performers are and it’s hard for the leadership team to always get it right,” says Ms Gregotti.

But Ms Gee warns that, when celebrating an individual’s success, it is also important to ensure the recognition is personal to them. For instance, while some people love to be publicly praised at a formal event, such a situation makes others cringe, although they may respond well to being mentioned in a newsletter.

For maximum impact, however, the reward itself should ideally be thoughtful and personal, although Ms Gee acknowledges it’s hard to do. She explains: “The optimum is giving someone a gift, which could be time off or a nice meal with their partner, rather than cash as it just tends to disappear into their bank account. The idea is they can see from the gift that you know and understand them, and have thought about them.”

As for the third and most important form of recognition, this consists of informal, day-to-day praise and appreciation of colleagues. But it is here where we tend to fall short in the UK, says Ms Gregotti.

The leadership teams of too many organisations simply fail to connect with staff and recognise their achievements on a consistent and regular basis. Instead they wait for the annual performance review or end-of-year awards ceremony to tell individuals they have done a good job, which is simply not enough.

It is, in fact, “informal day-to-day conversations that have a much bigger impact than formal programmes”, believes Kirsta Anderson, global expertise leader for culture and engagement at people and organisational advisory firm Korn Ferry Hay Group (KFHG).

While formal schemes may be good for “injecting a bit of fun into what the organisation is trying to say about its values and they will have an effect, you can’t do them every day”, she says. Instead, what has ten times more impact is recognising an individual’s achievements in a timely fashion.

O.C. Tanner’s Mr Feaver agrees. “People should have their efforts noticed on a day-to-day basis,” he says. “For example, they may have done something positive around a core value, such as innovation, perhaps by coming up with a great idea. So you could say ‘innovation is important to the company so this is really valuable’, even if it doesn’t work.”

The important thing is to “make the recognition fit your language, values and culture”, he adds, with the aim of not only ensuring it encourages positive behaviour, but also comes across as genuine. But a key problem is that too many managers fail to look for opportunities to provide their employees with consistent recognition, claiming instead that they are too busy or do not want to give out praise for the sake of it.

KFHG’s Ms Anderson explains: “If you say to a manager that they’re not giving enough recognition to their team, a lot of them will respond, ‘Do you want me to lower my standards?’ But when they look at someone’s work, they tend to focus on what’s bad and skim over what’s good, which comes across as negative.”

What is likely to have the biggest impact in terms of boosting staff performance though is to “provide people with challenging, but achievable goals, give them personal responsibility for the outcome and timely feedback from a credible source”, Ms Anderson says.

So while recognition in itself will never be enough, “it’s important as it’s the day-to-day energiser that keeps people going – it’s the icing on the cake”, she concludes.