Imagine some day in the future you are sitting at your computer and suddenly it starts playing soothing music to help alleviate your stress levels. Or after a long morning, it advises you to take a break as you are starting to look tired.

Although such ideas will either sound like a great approach to health and wellbeing, or rather creepy, depending on your point of view, much of the technology to transform such notions into reality already exists.

For example, neuromarketers, who study the brain’s responses to both marketing and advertising, have for some time been using facial coding software via webcams to read consumers’ expressions to understand their emotional reactions.

So it is not a huge leap to think of these systems being reapplied in the workplace to boost employee engagement, which remains a key preoccupation of many leaders. Certainly within the next three or four years, this kind of technology is likely to fall sufficiently in price to make it worth considering on a mass-market basis.

But neuromarketing forms only one branch of the wider discipline of neuroscience. Although still in its infancy, neuroscience has been around since the 1950s and focuses on the study of the nervous system, which includes the brain, and its impact on people’s behaviour and cognitive functions.

Indeed, Andre Vermeulen, an international expert in the neuroscience of learning, and consultant to leadership and talent consultancy Full Potential Group, believes it will become increasingly important as the so-called fourth industrial revolution and artificial intelligence (AI) take hold. In his view, as job roles shift, disappear and re-emerge in new forms over the coming years, employees will need to display more and more “neuro-agility” or the mental ability to adapt quickly to change.

“Mankind will need to out-think, out-learn and out-innovate AI,” Dr Vermeulen says. “But while AI is good at pattern recognition, it’s not good at complex problem-solving. Its memory is big, but it’s not good at innovating, and that’s where neuroscience comes in, to help optimise our learning and creative practices.”

Neuroscience will also play a vital role in wider employee engagement terms too, he believes.

In terms of neuroscience, this is because at least two of the five threat and reward domains that underpin workplace behaviour are activated in the brain. Director of the Neuroleadership Institute David Rock’s SCARF model describes these domains as: status – our relative importance to others; certainty – our ability to predict what lies ahead; autonomy – a sense of control over events; relatedness – a sense of connectedness and safety with others; and fairness – a perception of fair exchanges between people.

High levels of engagement occur when people experience rewards from all five of these domains, but they become disengaged when experiencing high levels of threats.

In this context, leaders have a key role to play in learning what motivates their staff and linking it with the organisation’s business strategy. Moreover, if they learn to communicate effectively, it can contribute significantly towards employees feeling more connected not just with this strategy, but also with their colleagues too.

If leaders get it wrong, however, the impact can be negative instead. For example, if done badly, performance reviews may unintentionally generate a threat to an individual’s status, which not only makes it difficult to encourage behavioural change, but will also lead to disengagement. 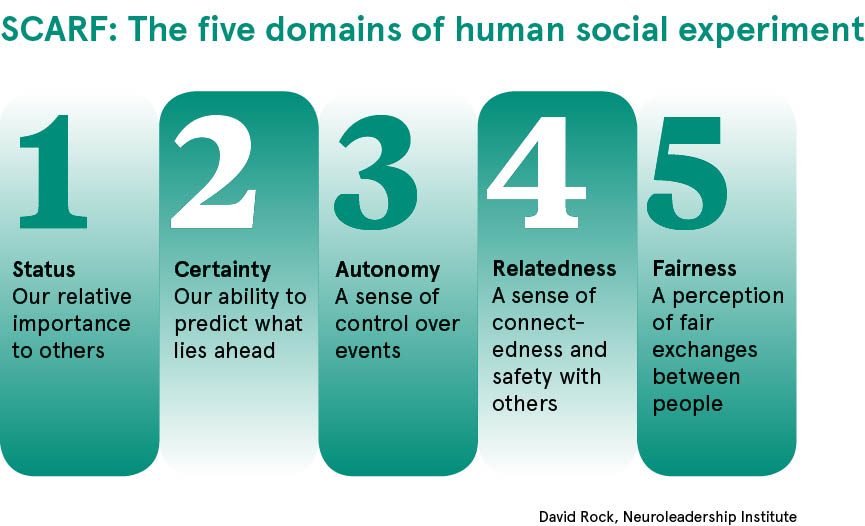 Neuroscience is no panacea for employee engagement

Despite such insights though, Alison Maitland, research and product director at performance management consultancy Lane4, believes neuroscience is no panacea and that its findings should always be placed in a broader psychological context.

“Neuroscience is a means of helping you understand what you’re doing and why, but it’s up to psychology to interpret that by looking at how someone becomes engaged, for example,” she says. “In other words, neuroscience is informing psychology and the two disciplines are now coming together to provide a more rounded view.”

Rebecca Hutchins, research manager at Walnut Unlimited, a neuroscience consultancy within Unlimited Group, agrees. The organisation has been using a neuroscience-based approach to undertaking its online employee satisfaction survey since 2015, when the decision was made to address staff turnover issues in some parts of the group.

Neuroscience can only offer part of the picture

To this end, reaction time (RT) testing was added to understand employee responses in more depth. RT testing is based on the idea that the quicker someone responds to a given question, the more strongly they feel about it.

Ms Hutchins explains the significance: “While 80 per cent of people may give the explicit response that the company behaves fairly, only 40 per cent might say it quickly. So the aim is to ensure they’re convinced of it so that the second measure goes up to 80 per cent too.”

By using this approach, it became clear that key emotional drivers of engagement at Unlimited were fairness and respect, while another important issue for many was flexible working.

Action on these points led to staff retention rates increasing by 40 per cent, staff turnover dropping to only 10 per cent and the organisation’s fairness rating jumping by 15 to 60 per cent.

Danni Findlay, Walnut’s talent director, concludes: “Neuroscience doesn’t give you the whole picture. It’ll shine a light on issues and measure difference, but you still have to ask why. Put another way, it’s the difference between reaction and perception and so, while it’s very useful, you do have to be careful about making assumptions.”