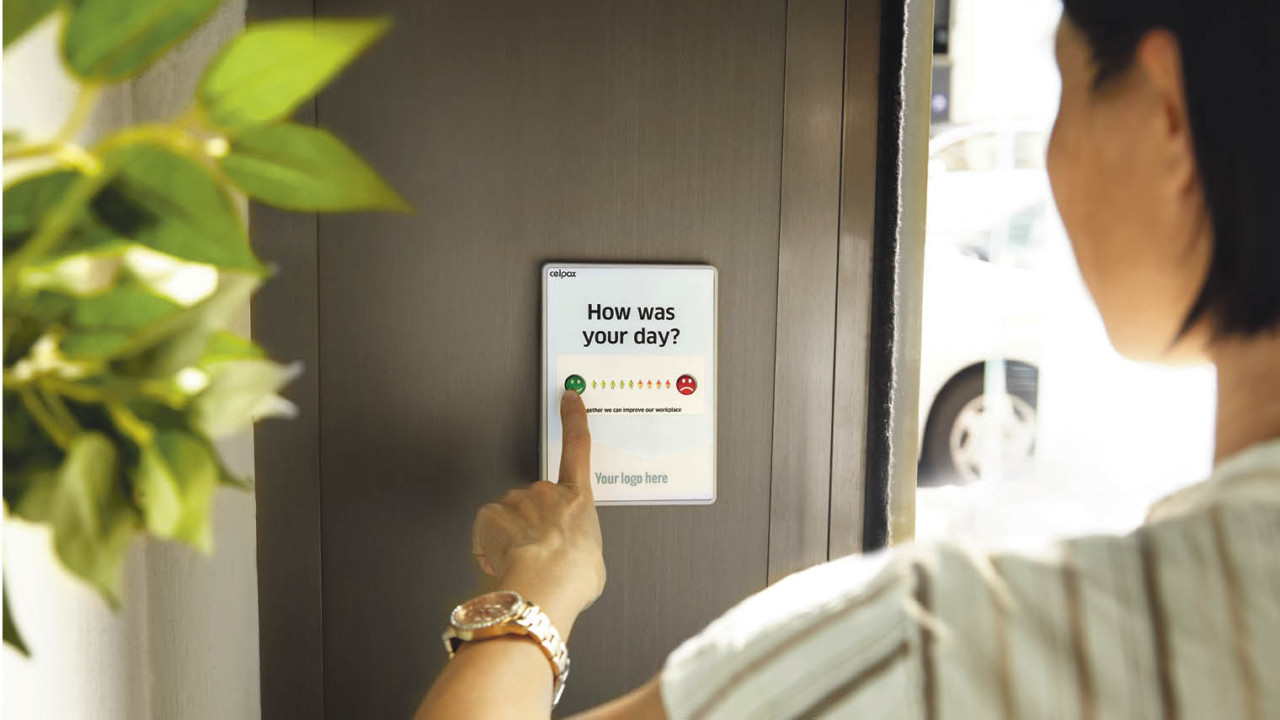 On a global scale, employees seem pretty fed up. Regular surveys by Gallup show that fewer than one in seven employees around the world feels engaged with their work.

Faced with what Gallup calls an employee engagement crisis, many organisations have turned to technology to monitor and, hopefully, improve engagement levels.

Yet engagement, as measured by Gallup, has stubbornly remained at or around this level for some time, leading human resources leaders to question whether disengagement is actually written into employee DNA.

Some analysts believe the introduction of technology is dehumanising the workplace and a hybrid approach to employee engagement would be more successful.

Joe Ales, co-founder of Underscore HR, which specialises in the delivery of human resources technology in large organisations, says: “Business cases for HR tech will nearly always state an explicit intention to automate time-consuming transactional tasks, freeing up capacity for more human interaction, whether that’s more time for managers to spend building relationships with their teams and understanding what’s important to them as individuals or more time for HR to spend coaching leaders on building the talent the organisation needs to be successful in the long term.”

Some analysts believe the introduction of technology is dehumanising the workplace

Adam Hale, executive vice president at human resources technology provider Sage People, says the magnitude of change happening now is similar to the transformation that took place in the 1990s when personnel morphed into human resources.

“Part of the change is an automation of the HR operations that are currently done by people, but honestly should not be done by people, such as reconciling the HR system with the payroll system or double-keying information into systems which should be handled through self-service,” says Mr Hale.

“Companies are now really focused on growth and you need great people to create that growth. We are in a skills crisis, not just in the UK, and I know some organisations have an attrition rate of 40 per cent. Try to grow a company when almost half the people in it are new. If you can get attrition down, even by one or two percentage points, that makes a huge difference.”

One of the company’s most interesting solutions is Flight Risk Radar, which combines analysis of a range of employee statistics along with benchmarking to identify key staff and whether they are engaged to mitigate the attrition risk.

“Employee experience is the number-one trend in HR in 2017,” says Matias Rodsevich, of the real-time feedback and performance review platform Impraise. “This is mainly because of one thing: recruitment and retention is becoming super-hard, and HR is shifting from its transactional role to become more of an enabler, embracing the concepts of speed, collaboration, adaptability and innovation.

“HR is adapting tools from other areas, such as IT or software development, to decide what the employee journey should be from hiring and onboarding to performance management, and on to exit and post-exit. The question is how can we improve the status of the employee, making them feel recognised and rewarded, making them feel that work is their second home?” 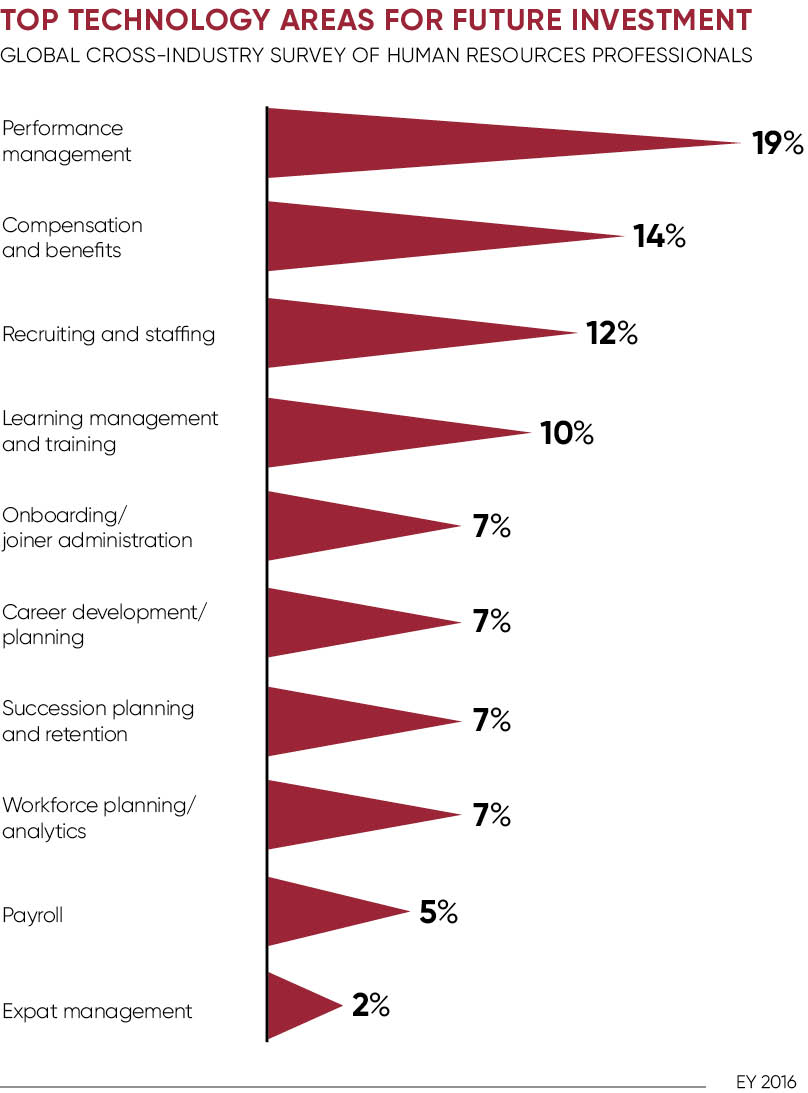 The benefits of replacing the annual performance review are obvious. “It enables employees to give upward feedback whenever they want and not have to wait for a year to do it,” says Mr Rodsevich.

This is particularly important for the millennials entering the workforce, who have grown up on social media and do not understand why there is no real-time feedback on company culture.

But it’s not just about millennials, according to Mr Rodsevich. “The way people work is changing. You have traditional companies such as IBM, Accenture or Ford that are shifting their core approaches to human resources. Traditionally companies  kept their clients happy, then their investors happy and finally their employees happy. Now employees come first,” he says.

“We encourage people to have one-on-ones with employees and give advice on how to do it. It is very important to have face-to-face feedback because it is important to see facial movements in response to how they take that feedback. We spend many hours talking to companies about how to give and receive feedback in a good way.”

Underscore HR’s Mr Ales says the best chief executives and chief human resources officers are using the big data this technology provides to understand what is really driving employee engagement, seeing which managers employees truly connect with and what those great managers are doing that can be spread across the organisation.

“No matter how charismatic and personally engaging the CEO is, line managers are the driving force behind employee engagement,” says Mr Ales.

“CEOs on transmit, broadcasting messages through town hall meetings or newsletters, have never built more than the most basic levels of employee engagement. Corporate social media platforms, such as Slack or Workplace by Facebook, allow CEOs and board members to build direct connections with employees at all levels of the organisation. These always-on, two-way communication channels have been a steep learning curve for some senior execs.”

Sweden’s Celpax started life as a sort of Facebook for companies to garner feedback from employees, but quickly realised people who were disengaged at work were the last people who would use it. They pivoted and stripped their concept down to something incredibly simple, a hardware panel with two faces, one happy and green, one sad and red, which employees could press to show their mood.

Celpax’s co-owner Rebecca Lundin says the aggregated feedback is then presented to managers. “Of course, you can see how their day was, but the most important thing is whether, over the long term, you are improving.

“This technology is the perfect tool to get richer conversations. The value comes from sitting down and talking to people about what is really happening. In the workplaces where these face-to-face conversations are happening, they have the happiest mood.”

So while shiny, new technology is all very exciting, it is clear that actually speaking to employees on a regular basis is never going to go out of fashion.

In 2016, the HQ of Bolton-based pram company Cosatto was voted one of the UK’s best places to work. The list of employee-friendly initiatives is almost as long as the giant slide that connects the office’s floors: Fruity Mondays where staff get free grapes and bananas; “street” parties in which staff get to throw wet sponges at directors; and an annual staff vote where one employee gets to live their “once in a lifetime” dream, such as climbing Everest. Chief executive Andrew Kluge says: “If you have a happy, motivated team of people, then they will look after consumers better and they will make better decisions.” The 2008 economic crisis saw Cosatto undergo extensive restructuring and a rethink of the company mindset. “I said to myself that if we have to go through the trauma of making people redundant, then we are going to rebuild a business that is fun and engaging,” he says. This included implementing technology to get rapid employee feedback, including a Celpax panel where employees press a button to indicate their mood as they leave and regular anonymous surveys using the TinyPulse platform. Mr Kluge says: “Celpax gives us a barometer on how the business is feeling; if the general mood is going down, we can ask why. “With TinyPulse, the question can be anything – what do you think of our future prospects, how good is your manager on a scale of one to ten? We ask them to qualify what they have said. As people have understood that it is anonymous, they have become incredibly honest.” The board meets regularly to discuss the feedback and any employee can ask to come along to see how this is acted on. “The technology is not a replacement for face-to-face,” says Mr Kluge. “It has to be a conversation. I have one-to-ones on a regular basis and I encourage my senior managers to do so too.”