There are many adjectives to describe Silicon Valley, the technological hub of the San Francisco Bay Area: innovative, groundbreaking, futuristic, creative and white.

The area, which spans San Jose, Palo Alto, Mountain View, Cupertino and Santa Clara, is home to countless tech companies, such as Apple, Yahoo!, eBay, Google and Facebook. With cutting-edge applications introduced every day, you would think their creators would be a diverse lot, reflecting the various backgrounds and ethnicities of the users. But sadly, this is not the case.

When they say ‘culture fit’, that means they are looking for a particular person they can personally identify with

Publication of workforce demographics among the sector’s giants paints a clear picture: Facebook has a workforce that is 3 per cent black and 4 per cent Latino; Apple counts 12 per cent of their employees as Latino and 9 per cent black; and Google has a reported 98,000 employees, while only a staggering 2 and 3 per cent are black and Latino respectively. These numbers are representative of a field that has had difficulty in hiring black and other non-white people. The question is why?

The battle for diversity in Silicon Valley dates back 20 years, when activist Reverend Jesse Jackson railed against the lack of inclusion in the tech industry in 1999. It’s a fight he is still having to battle today. Over subsequent years, scathing public revelations from numerous former employees have called out tech companies for institutionalised discrimination of race and gender, and cultures that remain unfriendly towards people who are not white.

Before exiting Facebook, Mark Luckie wrote a memo describing his time at the company. He said that as a black man, he was viewed as hostile and aggressive when sharing his thoughts, co-workers would grab their wallets as he passed by and he was regularly harassed by campus security.

When I first arrived in the Bay Area in 2012, I started work at Qualcomm as a wifi engineer. I was amazed at how few black and Latino people were employed there. Honestly, I could count maybe five African-American and African immigrants I saw every day, and maybe two Latino or Hispanic people out of a multi-building campus. I was also taken aback at how segregated it was, and how different ethnicities and cultures didn’t interact with each other. Up until that moment, I had never experienced anything quite like it.

Inclusiveness was not encouraged, yet “culture fit” – how you would get along in the current work environment – was bandied about. I would hear this term in conversations with recruiters, human resource managers, and during interviews with teams of engineers and project managers. Questions like, “How well do you work within a team structure?” or “What do you like to do on your days off?” As I fielded more questions from a primarily all-white team, they started to feel like, “How are you, as a black person, going to fit into this environment?”

“Cultural fit” being used an excuse for discrimination

Paul Clark, principal user experience designer at Dell, says: “When they say ‘culture fit’, for me that means they are looking for a particular person they can personally identify with.”

He recalls a workplace interview when his taste in music was queried: “One guy asked me if I liked Radiohead? Personally I find them to be criminally overrated, so I said no. You could then see the guy’s facial expression that he was no longer interested in me as a candidate. I think cultural fit is code for ‘will you be my bro?’.”

Referring to a previous job, when he was the only black person working at a startup in San Francisco, Paul says: “No one interacted with me. My boss would have her daily check-in, but other than that, nobody would talk to me. When my team would go on company outings, I would be off by myself.”

He says that being isolated caused him to leave the company: “I hated going into the office; it was a soul-sucking experience. I would have to listen to some very positive music in the morning, because I knew that would be the high point of my day.”

Tina, a former content designer for a Mountain View-based financial software company, tells of her difficulties in Silicon Valley as a non-white woman. “Many of these companies in Silicon Valley say they care about people and want to hear your input, but if you weren’t saying the things they wanted to hear, then they would put a lot of pressure on you and drive you out,“ she says.

Now a content designer at a non-profit organisation in Oakland, Tina describes a former workplace where there was a lot of turnover among women and minorities. “I don’t think that was by accident,” she says.

To get ahead, Tina says many black and Latino people had to adapt to the culture. “The management would say people had to be assertive, with a capital A. That meant taking up lots of space in meetings, talking a lot and saying buzzwords that did not mean anything,” she says. “Those people who didn’t would not receive promotions and could possibly be terminated.”

Tina recalls being frustrated with the HR department’s inaction towards perceived discrimination, when racism or bias was reported. She says: “HR said they would investigate it, but then they would come back and say they did not find anything or that they needed to hear more.”

Things came to a head for her when she tried to help get a job for a Taiwanese intern who was being overlooked by senior management. “My co-workers and I went to management on the intern’s behalf and told them that her being quiet in meetings could be attributed to culture. No one told her she was supposed to be speaking up in meetings like men do,” Tina says. “Management just brushed it off and gave us all these reasons why she wasn’t hired, but the thing was, they kept changing the reasons.

“I noticed when we would bring this to the attention of management, they would become visibly tense hearing these things. It challenged their own narrative of being very good people who would never have bias.” Tina left shortly after. 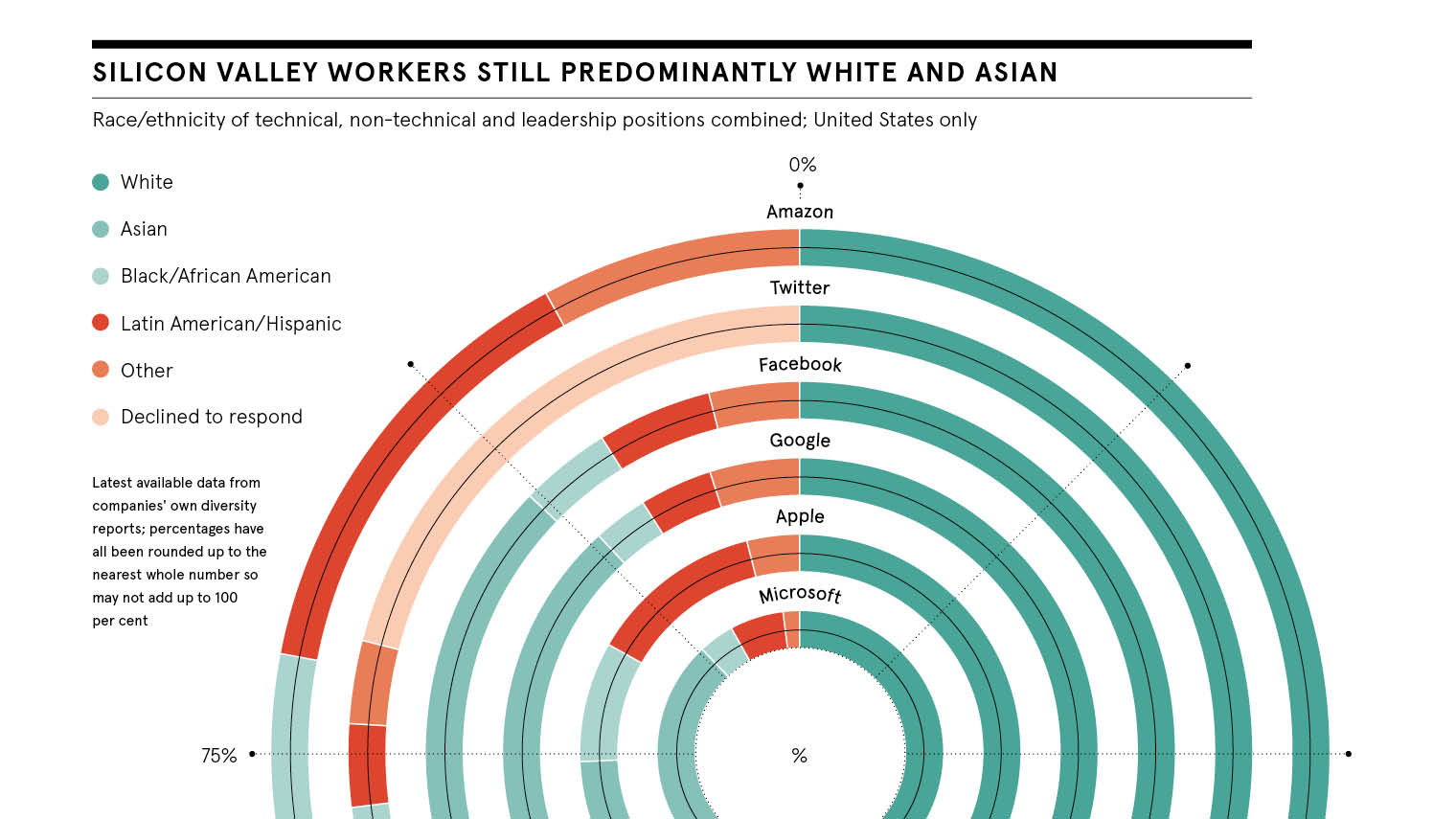 What can be done to make Silicon Valley more diverse?

In 2019, the question on many people’s mind remains how do we make Silicon Valley culture more diverse? Inclusion and diversity professionals hold workshops addressing unconscious bias, panel discussions showcase women and black and Latino people discussing their experience in tech, and politicians such as US Representative Maxine Waters are attempting to “crack the matrix” of exclusivity in Silicon Valley.

“The issue of diversity is a systemic one; it may not be intentional or malicious,” claims Jenny Mith, senior manager of communications and corporate partnerships at Codesmith. “People hire others who are like them. When you interview someone who does not share your common interest or does not come from a similar background, you may ask yourself, is it a good cultural fit? More than likely, the person will not be hired. When you have that over 20, 30 years, this compounds and brings us to where we are.”

Paul believes the key is in how companies recruit. “I would say diversify where they look. There are more colleges to recruit from than Stanford, Berkeley and MIT,” he says. “When you hire people who are used to being around different types of people that will trickle down to how other people are hired. You cannot fix people being racist, but you can fix how people can deal with other races and separate their personal bias from work.”

Regulating strict accountabilities and monetary incentives for minority referrals could also be the answer, according to Ms Mith. “Organisations need to assign a real value to diversity,” she says. When in doubt, money may be the great problem solver.

Silicon Valley must change, or its future looks bleak

As I look at my time in tech, I realise that the environments I have thrived in were inclusive, welcoming and open minded. Interacting with different people from all walks of life has been essential to my growth, not only as an engineer, project manager and a writer, but as a human being.

At this time I have no interest in pursuing opportunities in Silicon Valley. The possibilities of working at these world-renowned campuses intrigues me. Being involved with the creation of life-impacting applications and software sounds exciting, and why wouldn’t it be? To be a part of a team within a company that changes the world is something so many of us in technology have always wanted to do. But to do this I would have to face daily discrimination, passive racism and micro-aggressions that would impact my mental health, and this is a choice I cannot make.

“Those who have been in the tech field for a while have learnt to deal with the implicit biases,” says Ms Mith. And I agree. However, I deal with racism every day, and no amount of company perks, complimentary food at the cafeteria and free dry cleaning would convince me to endure it voluntarily. I would not be a culture fit.

Leadership
How do leaders build trust?
Talent & Culture
Business steps up to help employees with cancer
Talent & Culture
Apprenticeship – why firms must stop young people viewing it as a ‘dirty word’
Opinion
Menopause rights: UK’s refusal to change law should still give employers pause for thought
Technology
Carol Vorderman: business and education must work smarter to plug the AI skills gap
Growth Strategies
The chaos of change: why you need to involve your people in major decisions