Embracing a neurodiverse talent pool is about more than equality and inclusion, it’s actually best for business 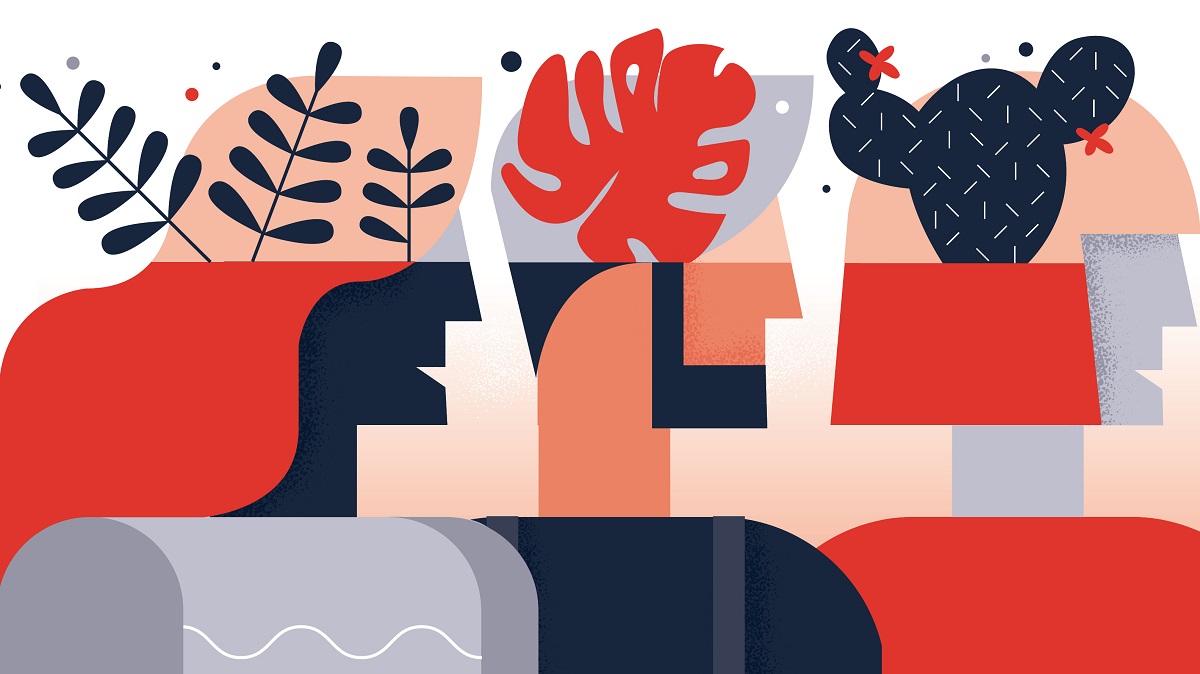 The term “neurodiversity” has come of age. First coined in 1998 by Australian sociologist Judy Singer, who is herself autistic, it now represents a key priority for the most dynamic and forward-thinking human resources and C-suite executives, as well as a talent pool that remains largely untapped.

“Neurodiversity in the workplace has only relatively recently become an area of focus for HR professionals,” says Shaun Hogan, senior associate at Stevens & Bolton. “It needs to be at the forefront of their agenda given that those who are neurodivergent may qualify as suffering from a disability under the Equality Act 2010, which is often overlooked.”

Professional services giant EY is consciously pursuing a policy of neurodiverse recruitment. “There are three key benefits for our business,” says Justine Campbell, EY’s managing partner for talent. “First, the future depends on our ability to innovate and this requires us to recognise and harness diverse perspectives. Second, our clients and communities are diverse and expect us to understand their needs and to represent them in our workforce.

“And third, our own analysis, as well as many public studies, demonstrate that diverse and inclusive organisations achieve greater margins, profitability and customer satisfaction, and enjoy increased employee engagement and retention.”

EY is leading the way when it comes to neurodiversity in the workplace, but it is not alone. Software giant SAP and advertising firm Ogilvy are both making strides to improve staff neurodiversity.

For instance, SAP has created and invested heavily in an autism programme by restructuring its hiring process to encourage neurodiverse recruitment. By taking neurodiversity seriously, it has not only strengthened the position of its brand to future talent, but has also helped improve productivity, creativity and efficiency. Its neurodiverse employees currently occupy roles in 20 different business areas, including engineering, research and development, HR, data protection and customer support.

“This really is creating an impact on the full business, rather than simply a small pocket of teams,” says Brian Duffy, president Europe, Middle East and Africa North, and executive sponsor for diversity and inclusion at SAP. “With neurodiverse employees in particular, I am always struck with the raw authenticity they bring to our teams and customer relationships; they interpret and present ideas with such clarity, which as a business leader is extremely refreshing.”

Neurodiversity in the workplace is not something SAP has incorporated simply as a matter of equality and inclusion; it’s something that’s helpful to its business.

“When you also look at some of the more typical traits which come with those individuals who are on the spectrum, such as having strong visual learning skills with an ability to recognise patterns, then attention to detail, concentration and perseverance over long periods, as well as high diligence and low tolerance for mistakes, are just some of the skills you can expect to gain from expanding your talent pool in this way,” says Mr Duffy.

Both EY and SAP credit Specialisterne, a specialist consultancy that recruits and supports talented people with autism and Asperger syndrome, for helping them develop a more neurodiverse recruitment process.

To embrace neurodiversity is to appreciate how minds that think differently might have insights that simply don’t occur to the rest of the workforce.

“The ad industry in particular is often perceived as an industry where only those who exhibit extroverted, dominant personality traits can succeed,” explains Helen Matthews, chief people officer at Ogilvy UK. “However, the beauty of creativity is that the next best idea can come from anyone, anywhere and we need to actively celebrate that by giving more people the opportunity to be part of it. 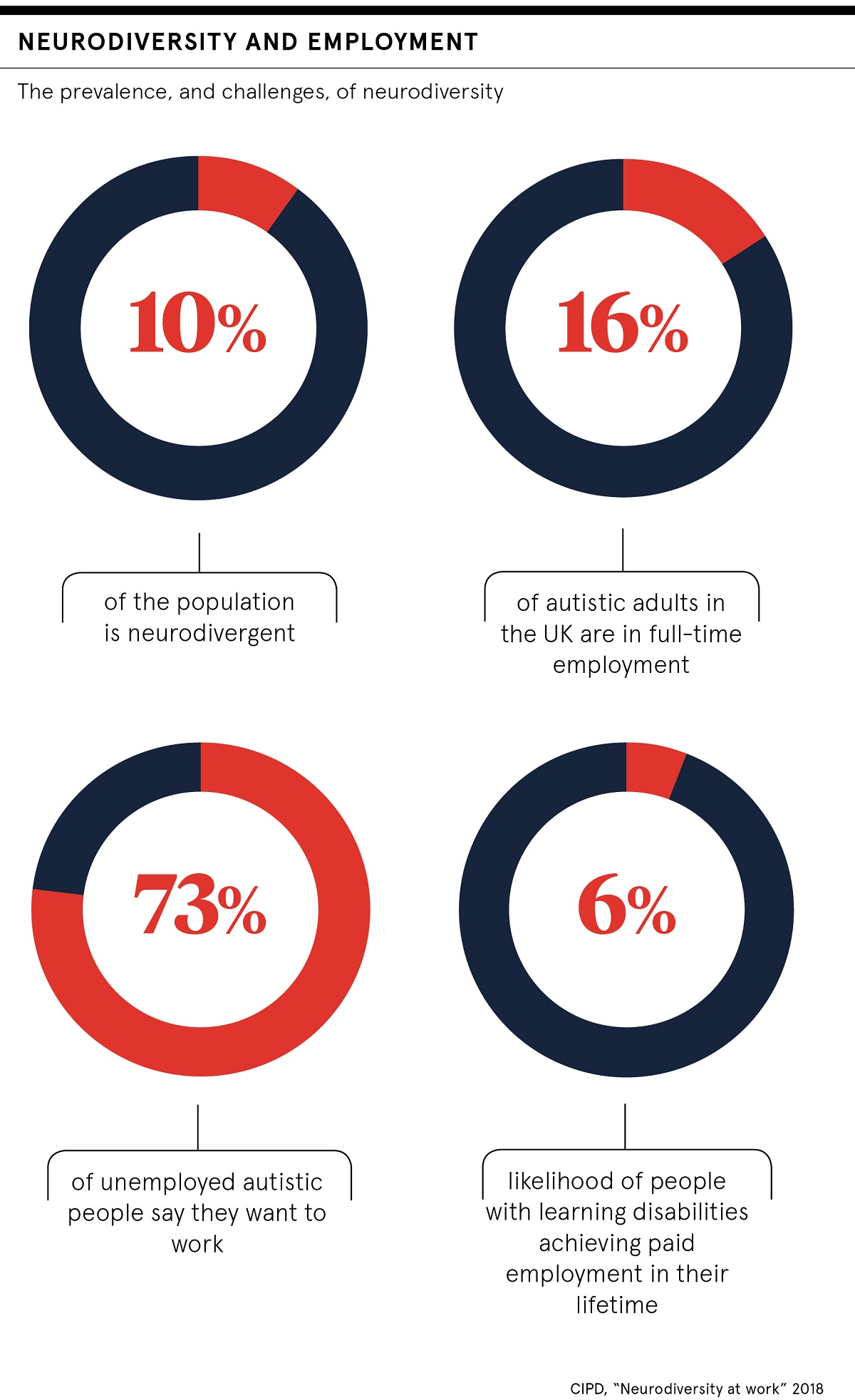 “There is a huge amount of benefit in hiring diverse talent, especially in a creative industry where we are always in need of new points of view, perspectives and thinking to bring to life that next big idea.”

Of course, incorporating neurodiversity in the workplace as a deliberate HR strategy has its challenges. Aliya Vigor-Robertson, co-founder of JourneyHR, points to statistics that show only 16 per cent of people in the UK with autism are in employment. “Although it’s well known they’re more likely to have key skills employers value, such as being detail oriented with strong analytical skills,” she says, adding that these very skills will become even more sought after as technology becomes more dominant in the workplace.

It is crucial HR professionals are educated about the issues neurodiverse people face in the UK. For instance, people with dyslexia might submit CVs with spelling errors. “This doesn’t mean they should be ruled out of the running for a role that has less emphasis on writing,” says Ms Vigor-Robertson.

Also, it’s important to ensure the specific needs of neurodiverse employees are taken into consideration. “We have to rethink traditional hiring methods and we have to keep iterating our workplace to get the best out of every single one of our people,” says Ms Matthews. “Not everyone can interview the same way, not everyone works the same way, so we continue to question ourselves, instead of holding everyone to a cookie-cutter standard.”

Talent management teams need to continue collaborating and listening. Assuming what people want and need from their experiences at work is a flawed approach, she insists. “Instead, it’s about co-designing policies and practices, coming from a place of openness.”

These are steps all organisations can take. “Quite simply, when our Autism at Work programme launched in 2013 in North America, we believed it was the right thing to do,” Mr Duffy recalls of SAP’s initial emphasis on neurodiversity.

“But since that point, it has now placed over 155 people with autism in 26 different roles in 13 countries. They are making valuable additions to SAP’s workforce, as well as having an extremely positive effect on employees and managers, a result we hoped for. But we never expected the level of return on investment we have. We have seen many employees come forward and self-disclose their autism as a result of the programme, and we have a 90 per cent retention rate globally for people with autism.”

When it comes to neurodiversity in the workplace, it’s clear that bold thinking at the top achieves tangible results.