Many factors may work against women receiving pay parity with male colleagues, some of which could be unintentional institutional sexism

Forty-six years on since the Equal Pay Act of 1970 and employees could be forgiven for thinking little has changed when it comes to gender pay gaps.

Last November’s Annual Survey of Hours and Earnings report from the Office for National Statistics (ONS) revealed women in full-time employment earn 9.4 per cent less than men (85.5p for every £1 men earn). If part-time work is included, the gap is closer to 20 per cent.

It may well be the lowest differential since the survey began in 1997, but it has barely changed in the last four years and despite prime minister David Cameron’s 2015 pledge to end pay gaps within a generation, at current rates of improvement the World Economic Forum estimates it will take 118 years before global gender parity is reached.

“It’s depressing to think it’s taken this long to arrive at what is still such a large gap,” says Tom Hellier, director of rewards at human resources consultancy Willis Towers Watson. But he and others believe future HR directors have a challenge on their hands when it comes to trying to reduce it for, contrary to what many people think, the gender gap is not actually about pay at all.

“These figures are not wrong, but they’re primarily created by occupational segregation where women are simply not represented equally across all roles,” says Cardiff University’s Alison Parken, director of its Women Adding Value to the Economy (WAVE) programme.

Her analysis of the Welsh economy reveals only 86 of 353 professions show gender balance, and nearly one quarter of all women work in just one, single (lower-paid) sector – health and social care. 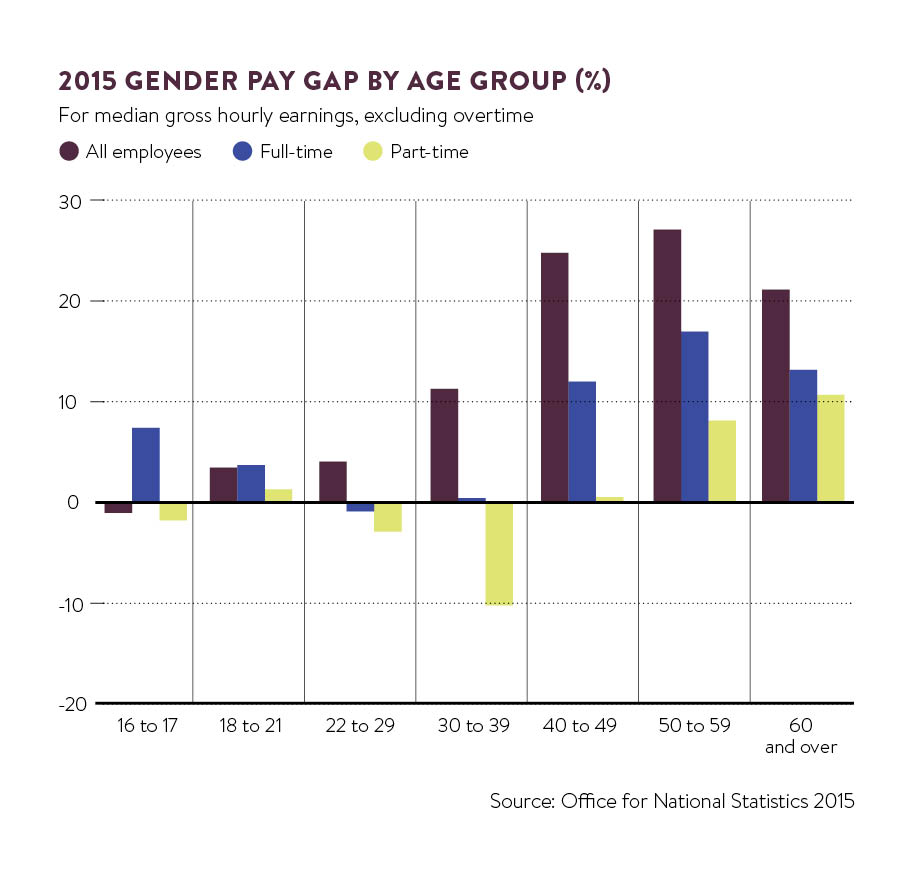 For HR chiefs, though, solving it means tackling much more complicated areas – deep-rooted social stereotyping, including tackling how women decide to enter sectors in the first place, what hinders progression, job design and, because women are still predominantly carers, how to accommodate family life.

Jemima Olchawski, head of policy and insight at equality group the Fawcett Society, adds: “We still think women are being paid less for the same work, but it’s a fact that in 2013 only 400 women started an engineering apprenticeship, while 13,000 men did. Society still dictates women display certain behavioural traits, so to be seen as go-getting or careerist is regarded as being outside these norms.”

So do HR professionals have any real power to impact trends that appear to be out of their control? The good news is that commentators believe they do.

“Evidence suggests pay gaps widen with each dependent child women have and with part-time working,” says Dr Wright. “When people suggest women ‘choose’ to work flexibly after having children, HR has to challenge this by having better job design that asks whether they are condemning women to lower-flying careers once they return.”

Flexible working is often heralded as the answer to this, but she believes HR needs to tread carefully here too. “Flexi-working can actually entrench the notion that women’s work is part time,” she says.

“Making paternity leave pay the same is another solution,” says Ms Olchawski. “This removes the tendency for women to automatically take time out and miss pay rises or promotions.”

Other experts argue HR can be instrumental in tackling Britain’s long-hours culture, which they claim exacerbates differences between full-time and part-time work. “The very phrase ‘part time’ indicates these workers aren’t interested in progression and career development,” says Dr Parken. “Job ads should remove this reference, so that work is couched more as tasks required rather than number of hours put in.”

One thing HR directors can’t do overnight is raise pay in poorly valued occupations and businesses rightly worry there can be the impression of a discriminatory gender pay gap when one doesn’t actually exist. For instance, women taking two years out to have children will miss two rounds of typically 2 to 3 per cent pay rises.

This is why many firms are sceptical of new gender pay reporting requirements, expected this October. Reporting is the government’s big idea to tackle pay gaps, and all firms with 250 staff will have to report mean and median pay differences, the numbers of men and women in each quartile of overall pay distribution, and differences between mean bonus payments.

Until organisations have gender data, they can’t begin to see where they might need change

“Gender reporting is controversial because it will expose gaps – some legitimate – that need further explanation,” says Dr Wright. “But this has to be positive because it will force firms to have conversations and it will reveal behaviour they might not have been aware of. For instance, a high street bank recently did its pay audit and found line managers tended to give higher pay rises to men.”

Some firms are already ahead of the curve. Maxus, the UK’s fastest-growing media agency, has Lindsay Pattison as its high-profile chief executive, and in the last year she’s personally developed initiatives encouraging women to rise up through the business and be paid the same as men.

She already publishes the agency’s pay gap, which is 4 per cent globally but is actually 1 per cent in favour of women in the UK. A quarter of its board are female, double the UK average. “These figures prove our approach is working,” she says. “We now insist that for any senior hire, a female is at least on the shortlist. My view is this, until organisations have gender data, they can’t begin to see where they might need change.”

With pay influenced by so many factors, the task facing HR is certainly a big one, but by forging relationships with talent earlier on, such as promoting historically male roles to school-aged girls, and supporting women at all stages of their career, they can certainly play a significant role.