Knowing when to pull the plug on a failing project is never easy, yet signs of impending disaster are often present at the outset when best practice can increase the chances of success

Projects are notoriously difficult to organise and execute, a fact borne out by a string of large-scale projects that failed to deliver on time and within budget, often in a very public light, and statistics suggesting as many as 70 per cent end in failure.

In the UK, arguably the most notorious project failure was the NHS National Programme for IT (NPfIT). Effectively disbanded in 2011, the programme cost more than £12 billion from an original budget of £2.3 billion.

Another is the BBC’s Digital Media Initiative (DMI), scrapped after five years at a cost of £100 million.

Both projects lacked clear direction and were diverted by additional requests made by the organisation, making the end goal a constantly shifting and increasingly expensive target.

Is such wide-scale failure and financial waste avoidable?

“Quite frankly, if a project is in trouble it should be obvious as soon as the planning and discovery phase is over,” says Andy Soanes, chief technical officer at Bell Integration.

“If sufficient budget and care has not been allocated to this phase then very soon project managers will see unexpected issues appearing with apparently straightforward tasks.” 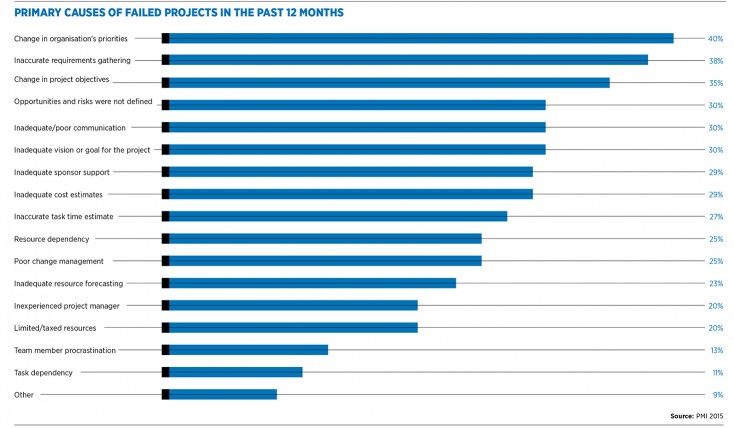 Typically these include shifting deadlines, new features being requested by the organisation and partners noticing risks that never appeared in their original tender.

“In this situation, project managers should have the confidence to bring things to a halt and re-examine the project, taking it back to square one if necessary,” says Mr Soanes.

There are common links and factors in these high-profile and very public project failures that companies embarking on major projects can learn from.

In the case of both the NPfIT and DMI, failure was largely the result of complacency, a lack of planning, and a rush to find partners and begin work rather than taking time to clearly delineate the project’s aims. 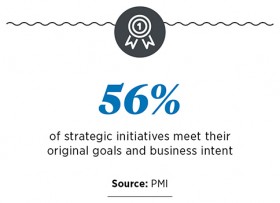 Last year, the Major Projects Authority, the UK government watchdog that oversees IT projects, gave a red light rating to four major IT projects that were deemed unachievable.

These included the Ministry of Justice’s Shared Services Programme, forecast costs for which have risen from £58.9 million to £127million, and two Ministry of Defence (MoD) projects, including the £5-billion Defence Core Network Services programme, which will replace the MoD’s computers, telephones, video conferencing equipment and networks.

“The failures and delays experienced by these projects have largely been caused by a misunderstanding of the original requirements, underestimation of the resources needed, and miscalculations around the technical specifications,” says Tracy Goddard, director of professional services, Europe, the Middle East and Africa, at Changepoint.

On a global scale, the Time Warner/AOL merger was a project that failed in a spectacular example of hubristic deal-making and poor post-merger delivery. 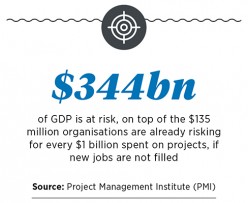 Due diligence by the deal teams and lawyers could be put into question, but as P2 Consulting director Pip Peel explains, in failing to plan the post-deal activity effectively, the business struggled to deliver the potential synergies and benefits, ultimately leading to a £200-billion stock write-down.

“The executive team in this deal failed to integrate the two companies quickly enough. An absence of robust planning and solid execution resulted in failure on all levels – time, budget and shareholder return,” he says.

So what are the early warning signs that companies should be looking out for in order to be able to pull the plug on a failing project and avoid unnecessary costs?

“If a project doesn’t have an execution plan that clearly articulates all its objectives and how they will be achieved, this is a warning sign,” says Jon White, UK managing director of Turner & Townsend, which project managed the Shard London skyscraper and is currently working on Crossrail. “Anything less than total clarity at the start of the project risks being compounded by the pressures of the delivery phase.”

Another sure sign of impending failure is ineffective governance that fails to engage all stakeholders.

Peter Osborne, managing director of LOC Consulting, says: “Governance arrangements need to come from a stakeholder negotiation that successfully ensures their buy-in to the project and their role within it. If stakeholder roles are instead dictated, they can become disillusioned and more critically disengaged.”

For most large organisations, a properly configured programme board is pivotal to project success. Any sign of board members looking after their sectional interests, rather than being collectively accountable for the project as a whole, must be addressed quickly. 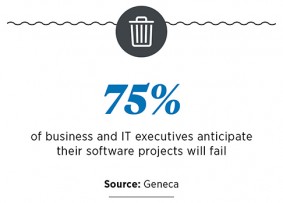 There also needs to be a clear baseline for the scope of work to be done and its projected cost. All projects undergo change and change implications should be reported against this baseline so the project management team can project the likely outturn cost at any point in time.

“A project that does not have a clear scope and associated cost estimate is effectively out of control, and that’s another major warning sign,” adds Mr White.

Clearly, once a project is underway, poor communication between designers, contractors and the client can cause wasteful delays, while the inability to adapt to unexpected issues can undermine progress.

Changepoint’s Ms Goddard concludes: “It is hard to know when to pull the plug on a project, particularly when there has already been a high level of investment, and this is why you need monitoring throughout the life of a project to identify when things are going wrong. Things can go from bad to worse in the blink of an eye, so having a constant pulse on what is happening is vital.” 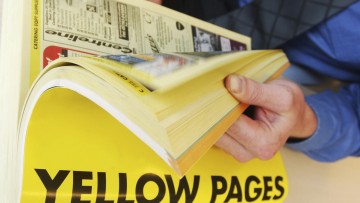 Efforts to launch globally quickly encountered problems, at which point LOC Consulting was brought on board to deliver a project health check and project recovery plan.

The project management team quickly uncovered a number of major issues, including project specifications not being aligned to business needs, functionality promised to customers not being delivered, and a general lack of functional prioritisation and governance.

Their first recommendation was a freezing of scope, enabling Truvo’s delivery teams to discuss the backlog with the managing directors for each country and establish a top-down prioritised list of features and functionalities.

This eliminated scope creep and allowed the delivery team to assess the level of effort required correctly to develop each feature and deliver them on time, rebuilding confidence in the product and delivery teams.

The restructuring of the development teams into two separate work streams also ensured business priorities and commercial delivery targets could be met.

Truvo achieved its objectives of enabling the 5,000 MySites already sold to go live and establishing a blueprint for the future, at the same time realising savings of €2 million (£1.39 million).