How to manage company liquidity

Businesses have faced many challenges over financing in recent years. The financial crisis of 2008 had a profound effect on the global economy and saw the introduction of a raft of new regulations aimed at preventing further crises.

Greater restrictions on bank lending practices have made funding for all businesses more challenging and recent market volatility has exacerbated the situation.

As financing issues have become more nuanced, the role of the corporate treasurer has been in greater demand among many businesses.

“Since the recession of 2008, we’ve seen a rise in the demand for treasury roles, particularly as companies have been paying greater attention to their balance sheets,” says Nigel Peters, managing partner at global interim management services firm Alium Partners.

“Treasury and corporate finance is a very niche area and we’ve seen more call for that capability, particularly now with much higher cash levels on balance sheets, or pressures created by the state of the economy or increased regulation.”

New regulatory challenges have made life tougher for both banks and borrowers. The implementation of the Basel II international banking regulatory accord  has had a profound impact on banks’ ability to lend, as it included a number of conditions regarding the setting aside of capital.

The impact of the regulation has been widely felt, with governments around the world taking measures to shore up the banking system through quantitative easing measures. But bank risk appetite has been slow to return since the financial crisis.

Larger companies have been able to weather the changing conditions, with access to cheaper sources of finance than smaller businesses.

“Big corporates with investment-grade ratings haven’t had lots of difficulties to raise financing,” says Yann Umbricht, partner and UK treasury leader at consultancy PwC. “It’s really easy, [companies] are borrowing for longer and cheaper than they ever did before. In European markets, corporates are borrowing at negative rates.

“Bank financing is a little bit trickier because of the regulation and there are so many capital requirements.

“For larger companies it is easier because banks are more likely to lend if you have a good rating and it doesn’t cost you too much capital. If you’re a riskier asset, it becomes more difficult because the bank will need a greater return and it will be expensive.”

While the risk of investing or lending to smaller companies can be greater than well-established, larger companies, the survey noted that default rates for small businesses have continued to decrease over the past two years. 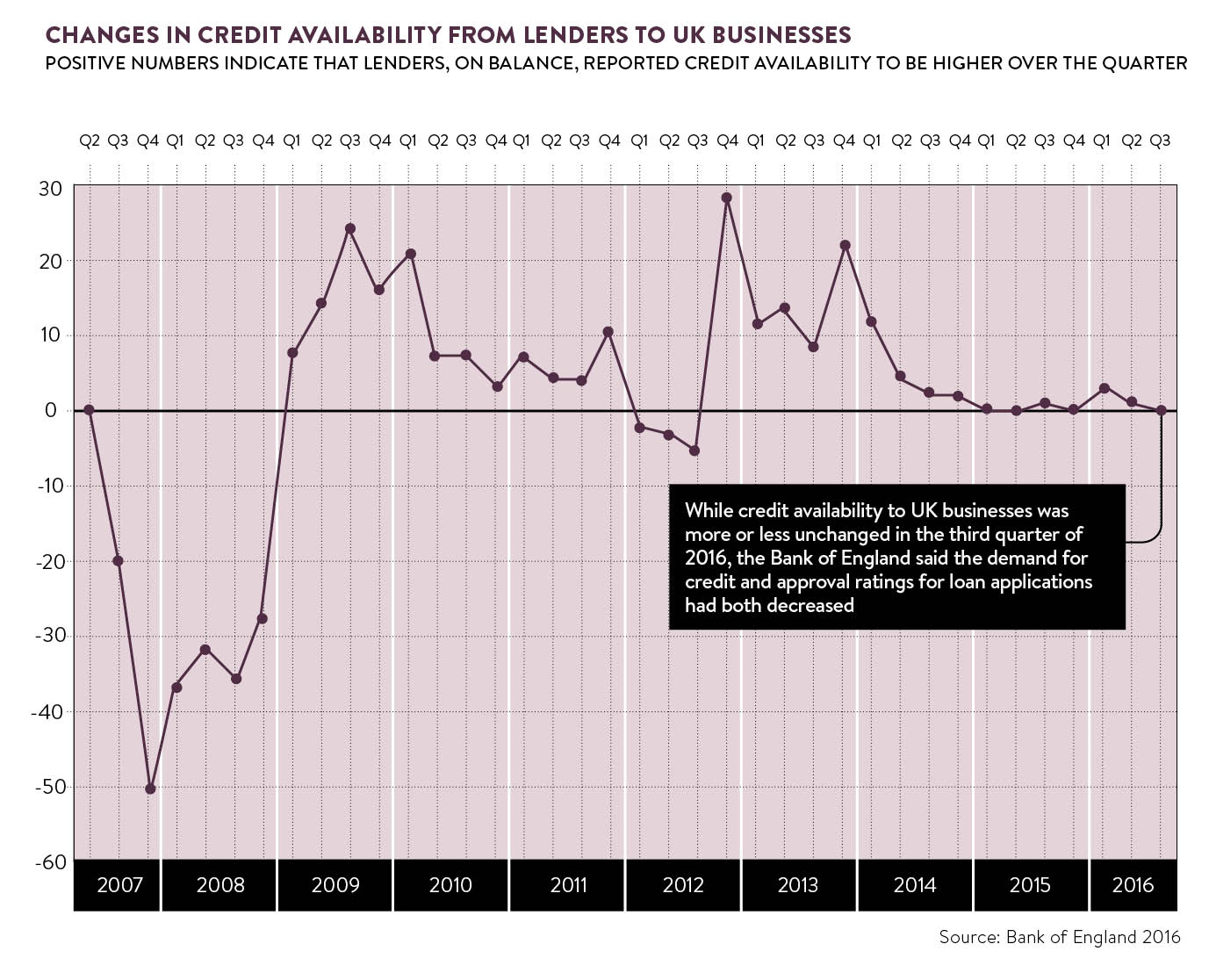 Despite bank reluctance to lend there are a number of financing options available to corporate treasurers and chief financial officers in the current climate. Interest in more established alternatives to traditional lending, such as invoice financing, has surged.

According to the Asset Based Finance Association (ABFA), the total amount of lending secured through invoice finance hit £20.3 billion in 2015-16, a record high. The UK and Ireland industry body for asset based lending and invoice financing, reported a 5 per cent increase on the previous financial year. The surge was driven by an 18 per cent increase in the amount drawn down by businesses with a turnover of more than £100 million.

“While the availability of finance from traditional sources was relatively slow to recover from the credit crunch, the asset based finance market opened its doors to businesses and there remains significant capacity to provide more finance to more UK businesses,” says ABFA chief executive Jeff Longhurst.

Alternative forms of financing have also grown in popularity. With businesses turning to new and emerging sources of finance to meet their liquidity requirements. In a report published by independent innovation charity Nesta, in partnership with consultancy KPMG, £2.2 billion was raised in alternative finance during 2015, benefiting 20,000 small and medium-sized enterprises (SMEs).

Peer-to-peer lending has also seen an increased number of business customers taking out loans. Data from the Peer-to-Peer Finance Association (P2PFA) showed there were 24,394 business borrowers at the end of June, up from 7,291 during the third quarter of 2014 when the trade body began collecting lending information.

Indeed, £405.5 million in new business lending was made during the second quarter of the year by P2PFA members, some of the biggest names in the sector. Cumulative lending to businesses – the total amount lent to businesses since a lender was established – at the end of the second quarter stood at around £3.4 billion, compared with £2.5 billion at the close of 2015.

A related area that has become increasingly important is the crowdfunding space, where startups and newly launched companies have been able to raise significant sums. According to the Nesta report, equity-based crowdfunding platforms raised more than £245 million in 2015, up from £84 million in 2014. Thousands of investors have put cash into these platforms, with a total of 720 businesses successfully raising cash.

Other sources for financing have emerged in the high-net-worth sector. Wealthy investors, such as high-net-worth individuals and family offices, looking for better returns in the low-yielding market environment, have increasingly turned to the SME space to invest in fast-growing companies at an early stage.

The impact of Brexit on lending

Looking ahead to 2017, the key challenge for firms is likely to remain Brexit. With indications that Article 50 is likely to be triggered early in the year, corporate treasurers will be forced to plan ahead for any potential fallout.

A lack of clarity over what the government hopes to secure from negotiations has led to much market speculation and put increased pressure on the value of sterling.

“In the area of treasury, the impact of Brexit was largely factored in before the vote and that was the reduction in the value of the pound; we’ve seen that critically more recently and the impact is now being felt even more,” says Mr Peters at Alium Partners.

“From the clients we’ve been talking to, they are more interested in ensuring they are covering liquidity and planning their cash management. The reduction in the value of the pound has given increased impetus for treasury people across more businesses.”

Ultimately, businesses are likely to face ongoing challenges in the months ahead as uncertainty continues to dog the markets. The funding challenge will differ from company to company, however there are a number of things that corporate treasures can do to prepare.

“The markets are very different depending on what your size and structure is,” says PwC’s Mr Umbricht. “The one thing I believe that everybody has in common is managing cash.

“The first thing to know about managing liquidity is to get as much cash as you possibly can. You reduce the need to fund your business from external borrowing.

“The second thing you need to know is what your funding and liquidity risks will be in the future. You really need to align your liquidity management and financing strategy to support your business objective.

“What is very important to remember in the current environment is that with Brexit, and foreign currency and commodities volatility, it is very difficult to predict how much cash you will generate and how much you will need.”

Preparation is key. With further challenges on the horizon, corporate treasurers will need to make sure they are able to meet their liquidity requirements in the months ahead.

“With the increased pressures you’re seeing on the pound now, if you’re not forecasting properly and not planning ahead, it will quickly catch up with you,” warns Mr Peters.

“Don’t wait for it to happen to you, forward plan and forecast to optimise your cash management. You can see what’s going to happen in the next six to twelve months; if you do nothing, you achieve nothing.”