Let’s imagine you’re going to a birthday party. The person celebrating is a 40-year-old male and he wants presents. You’ve known this guy for a while and spent time with him on a semi-regular basis, so you know he likes DIY and table tennis. He’s also partial to a drop of sherry. He enjoys Will Smith films and he fancies Emily Blunt.

Equipped with this all information, plus details such as his approximate clothes size, whether he wears glasses or not and if he likes going out or staying in, you are well placed to get him something relevant that he’ll make use of. He doesn’t like scuba diving, so you don’t buy a snorkel. Simple.

This, basically, is analytics. It is the process of collecting data about a subject to help you make better decisions. Because Amazon wants to sell you stuff, it makes a note of your activity on the website and it offers you more stuff you might want to buy.

Anyone who has a Netflix account, searches with Google or dabbles with Facebook will have experienced analytics first hand, offering you films like the ones you’ve watched before, presenting relevant search data or placing advertising for your particular demographic.

But analytics is more than just selling people stuff. There is a whole world of data out there just waiting to be crunched for a better understanding of the world we live in and the way things work.

Japan’s bullet train system is a technological marvel and a good example of how analytics can make things better. With a top speed of more than 180mph, it is one of the safest and most efficient transport systems ever created.

“Its railways are intricately networked, using thousands of sensors to collect petabytes worth of data, which are used to update train times and communicate in real time any updates which may affect the tightly run schedules,” explains Bob Plumbridge, chief technology officer, Europe, the Middle East and Africa, at Hitachi Data Systems.

“Not only does this system enable trains to run on time, in 2011 the system was responsible for safely terminating all the trains during the Japan earthquake and tsunami, saving hundreds of thousands of lives.”

Hitachi analytics helps to maintain train and track integrity on the bullet trains with its streaming data platform. Sensors attached to the trains feedback information about wear and tear on the trains’ wheels, and can identify sections of the track that require an upgrade.

In another example of the power of analytics, IBM’s Watson system has been designed to digest large amounts of unstructured data and rationalise it to produce sophisticated conclusions. In one famous case, the software ingested the whole of Wikipedia and used what it “learnt” to outscore two world champion Jeopardy contestants.

“These systems can process video, audio, text and a variety of other data sources to help solve a variety of problems, including medical diagnosis, detecting insider trading, forecasting sales, identifying crime via CCTV and many others,” says Charles Caldwell, a senior director at Logi Analytics.

“Some of the work in this area definitely feels like something out of science fiction or your favourite conspiracy theory. We can already do some amazing things,” he says. “Target has developed an algorithm that can predict with 85 per cent accuracy if a woman is pregnant based on her in-store purchases. Systems like Watson can read through medical documents and diagnose cancer as good as, or better than, a human doctor.”

The central premise of good analytics is to make evidence-based decisions where before we relied on circumstantial observations such as “we’ve sold a lot of this stuff, people must like it”. But that’s just the beginning.

The next step is automation, getting the software to collect the data, process it into intelligible chunks and then make small adjustments to business operations

For a few years now software developers have been moving through the gears, starting with analytics that is descriptive (observing past trends), then predictive (making safer bets on the future) and now prescriptive (machines telling us what is statistically the best course of action).

The next step in this chain is automation, getting the software to collect the data, process it into intelligible chunks and then make small adjustments to business operations – orders, marketing collateral, store layouts, treatments and so on – to improve the status quo.

“This is great for optimisation, but it still requires interpretation and input from humans. In the future, machine-learning solutions should advance to make the human intervention required more and more minimal.”

Analytics will obviously become more sophisticated as time ticks on, but it will also be more widely available and intelligible. Currently, people throughout an organisation understand, at a simple level, that sifting data leads to better decisions, but hand them a data set and they’ll give you an anxious, puzzled look.

It’s why investment companies that make instant decisions about where to park their cash use MIT maths graduates, known as quants, and lightning-quick software to move a split second before the market does.

The speed advantage is increasingly important in other areas of business too, meaning we need information to be accessible and actionable by non-Nobel Prize winners.

“Powerful analytics tools are needed by data scientists to discover patterns in data,” explains Chris Nott, IBM chief technology officer for analytics, who oversees the Watson programme. “However, expectations have shifted as the world has become always connected and socially networked. Business users want access to data to get insight themselves now. 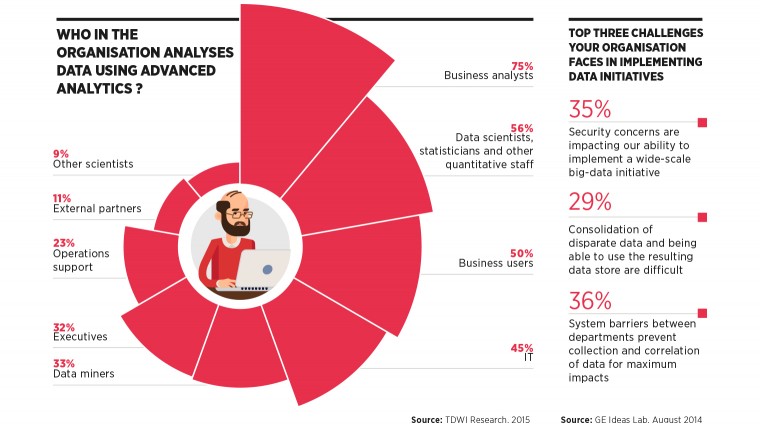 “Data is no longer going to be in one place. A big driver for many organisations is building a richer and more complete view of customers and their activities. While much of this information comes from an organisation’s existing business systems, we are seeing a drive to use more data sources, both internal – logs, records, documents – and external, such as social media.

“This means that transactional customer data is being augmented with insight from the interactions an organisation has with its customers, their attitudes, behaviours and preferences, and in some cases, location.  Of necessity this data will be distributed. Therefore, what is needed is governed provision of and access to data from those sources.”

“In a decade’s time, a laboratory investigating a cure for cancer may need data pertaining to patients today. Yet under data protection regulations, such data should have been deleted after five years,” he says.

“A geologist in 50 years’ time, seeking to identify the causes of global warming, would find that large sets of critical data had been deleted decades ago because there wasn’t enough data storage space to keep them all.”

These sticky wickets notwithstanding, the scope of what we can achieve through analytics will increase quickly in coming years. Organisations of all sizes and all intentions will make quicker, more impactful decisions constructed upon the “secrets” this software uncovers.