Business and hierarchies might change, but as Matthias Kipping, author of the just-published book Defining Management, notes “there’s always someone who needs to be at the top”, explaining perhaps why the chief executive’s role is just as coveted as ever.

However, with the challenges chief executives face arguably at their greatest, is the route up the corporate tree changing too? Do aspiring chief executives really need to climb all the branches from the bottom up, or can those in adjacent trees more easily swing across and from a younger age?

Discounting small business entrepreneurs, who are chief executives by default, evidence does indicate the changing nature of the role, to be more social media-driven and brand-ambassadorial in nature, is widening the scope of those who can apply. 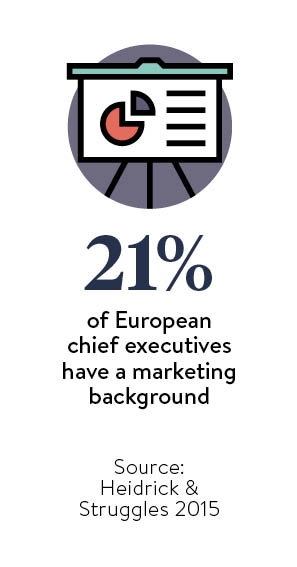 While age has stayed more static – half of all chief executives globally are in their 50s, according to Capital IQ – the UK now has more chief executives aged under 40 than Italy, Germany and France.

“CEOs are a broad bunch, but there’s an appreciation they no longer need to ‘serve their time’ like they used to,” says Brenda Trenowden, former managing director of Lloyds Banking Group. “Nowadays, being at one company all your life could work against you. They need broader experience. They have to be better communicators, more attuned to different groups, grasp technology better and be more agile.”

Michael Barrington Hibbert, founder and chief executive of headhunters Barrington Hibbert Associates, says: “The net is being cast wider. International experience is much more highly regarded due to the global nature of the role, as is having a deep appreciation of different cultures and speaking more than one language. Being a CEO now is like being a politician – the skills are changing.”

And it’s this more consultative, listening aspect to the role that Ms Trenowden argues could spell the biggest change of all by opening up the chief executive role to more women.

Ms Trenowden is also global chairwoman of the 30% Club, which campaigns for more executive diversity. Currently only 4 per cent of Fortune 500 companies have female chief executives and there are just seven in FTSE 100 firms. But she’s clear the evolving chief executive role will showcase female talent. “There’s no single CEO profile anymore, but building teams, collaborating and listening to more voices are leadership traits that will make women more visible,” she says.

It’s a view Angela Middleton, chief executive of Middleton Murray, one of the largest apprenticeship and training providers in the UK, supports. She says: “CEOs aren’t managers; they are leaders and strategists. While the role encompasses many things, if you can’t put a team together, CEOs are in trouble. It’s the most crucial task.”

But does this mean the route to the top really is open to all? 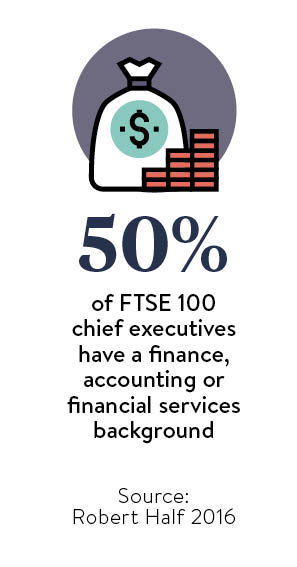 “It’s not yet quite so simple,” says Mr Barrington Hibbert. “CEO choice is down to what strategy needs pursuing at that particular time. It can favour wanting a steady hand just as much as new blood,” he says.

“Shareholder approval still depends on track record. The transformation Tidjane Thiam did as CEO at Prudential is what got him his current CEO job at Credit Suisse. By comparison, Microsoft has never recruited a CEO from the outside.”

One chief executive who knows what it’s like to reach the top for the specific skills the organisation wanted at that time is Stephen Robertson, chief executive of the Big Issue Foundation. He began his career selling records at Our Price, but switched to the charity sector, to apply his retail nous there, eventually growing Shelter’s charity shop portfolio.

Mr Robertson says hard financial success got him noticed by a headhunter. “It was all about what I’d demonstrated,” he reflects. “Commerciality mattered. Yes, a CEO is about relationship building, but it’s hard to demonstrate this at interview, so financial background has sway. Hirers want to remove the speculative element that taking on a CEO can be.”

It’s perhaps not surprising that a head for figures is still a trait most chief executives share. According to 2016 research by recruitment firm Robert Half, more than 50 per cent of FTSE 100 heads have a finance, accounting or financial services background and 25 per cent are ex-accountants.

Even when chief executives appear to be left-field choices, there are often clear reasons they’ve been picked. Russell Longmuir is chief executive of the British Quality Foundation (BQF). On paper he typifies the opening up of the chief executive role. He’s ex-consultancy – KPMG and IBM – and wasn’t an internal candidate being groomed for the role.

But he says: “My background is professional services and BQF is effectively a business-to-business services organisation. When I went for the job, there were other people with specific ISO-compliance and head of quality backgrounds, but at the point I joined, the strategy for BQF was service to members, which my background has been all about.” 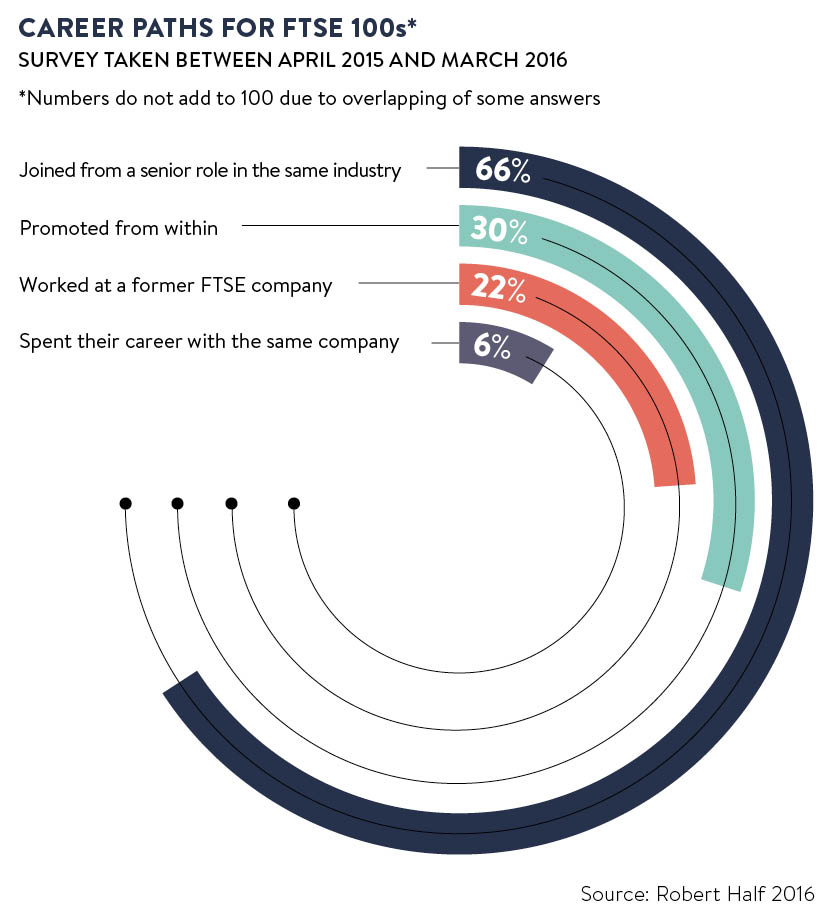 It’s worth noting that even those with a pedigree of chief executive-ships behind them are still nervous about their suitability. When it comes to FTSE 250-level roles, Mr Barrington Hibbert still argues holding an MBA from a respected business school matters, while getting a chief operating officer role – something he calls the “CEO-designate” – is also a good bet.

Ms Trenowden agrees. She says: “For any aspiring CEOs, especially females, being in line of sight is as much the route to the top as anything else and that means getting on to exec boards, then moving up from there.”

Nowadays if you’re a CEO with a traditional outlook, you’ll be left behind

She contends that Alison Brittain, chief executive at Whitbread, made the seemingly impossible jump from banking precisely because of her retail banking expertise, but also her boardroom presence over a 20-year period.

But, if anything has changed, perhaps it’s that meritocracy is better applied and that potential chief executives will be given a shot, just as long as they don’t want it too fast. “I joined as a consultant, was noticed, got given training and then moved up, and got noticed some more,” says Oliver Harris, chief executive of resource solutions at Robert Walters, of his 16-year route to the top.

“Being brutally honest, I didn’t think I’d be CEO, but moving up to team-leader roles, MD roles and executive roles gradually gave me responsibility. I’m a firm believer that the role is changing. Nowadays if you’re a CEO with a traditional outlook, you’ll be left behind.”

Arguably diversity of thinking will be the skillset current and future chief executives will need more than anything. It’s a skillset that implies age, gender and old-school networks will become less important.

“Once you’re a CEO, you can’t bluff it,” says Mr Robertson. “Some see this as a need for experience, but I have a more positive view. Younger people want to make a difference and from an earlier age. To me, that they are ‘bothered’ is a good thing. Being bothered will come to define the best CEOs of the future.”

PROFILE OF A CAREER CEO 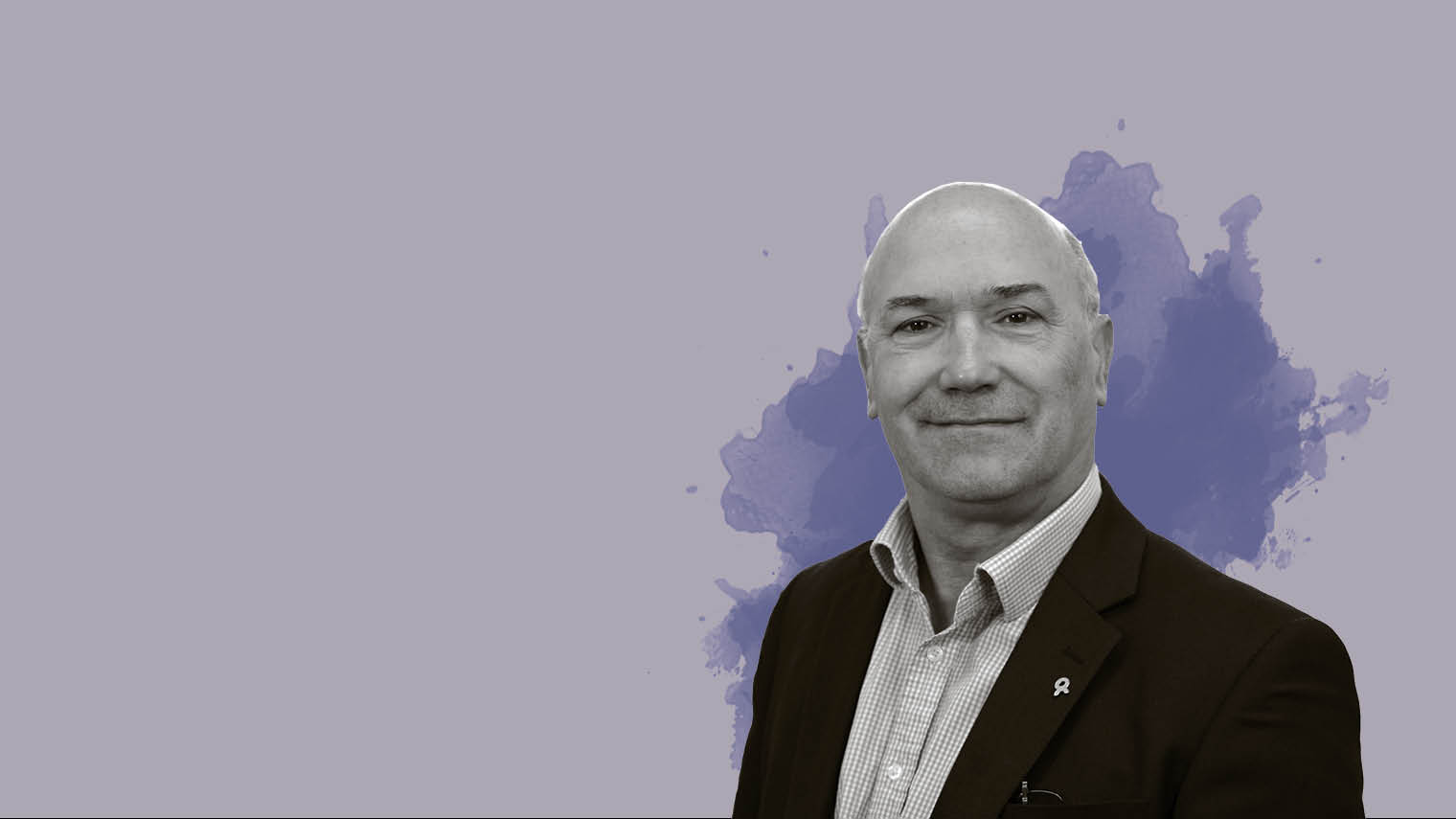 But, despite his enviable experience, he admits he was convinced he’d be next for the chop at every round of interviewing for Oxfam. “I always felt someone would expose what I didn’t know or that they’d find someone better,” he says.

What he was confident about though was his track record proving he’d coped with chief executive jobs with an ever-larger scope each time, even though for both Mencap and Oxfam he was an external candidate.

“At VSO, I was already there. I joined as a volunteer. At the time it was more important I knew about the detailed operational side rather than being a ‘leader’,” he says. “For the next two CEO jobs though, I’ve been appointed for being able to deliver a vision.

“Moving to Mencap was toughest for me. I knew little about disability, but I was using my ‘running-an-organisation’ skills. The learning curve was phenomenal.

“Charities do tend to recruit more outside CEOs, perhaps because they have a greater sense of fairness and transparency, and look harder at people’s skills more closely. But the role of the CEO is definitely changing. It’s about delivering a purpose and continually reinventing to remain relevant. A CEO is the custodian of the vision, vitality and health of a business.”