“As an employer, I can tell you that finding young qualified technical, project or quality engineers with up to five years’ experience is near impossible,” according to David Davies, managing director of Axiom Manufacturing Services, a contract electronics maker based in South Wales. He’s desperate to find qualified engineers.

But, like so many UK firms, he can’t. And why? “Despite the fact that we live in a technology-driven age, the view many students hold of engineering is that of 40 years ago,” he says. “They think of men working in dirty factories, rather than the scientifically skilled professionals who are responsible for the development of their smartphones.”

Tragically, he’s right. The UK has a shortfall of engineers, which is crippling the economy. And at its core is a reputational travesty. The department for business polled British children in 2014 asking their views on manufacturing. It revealed only 15 per cent would consider a career in it, with 40 per cent calling it boring and more than half believing it to be dirty. Of female university students, 12 per cent wanted a career in manufacturing. 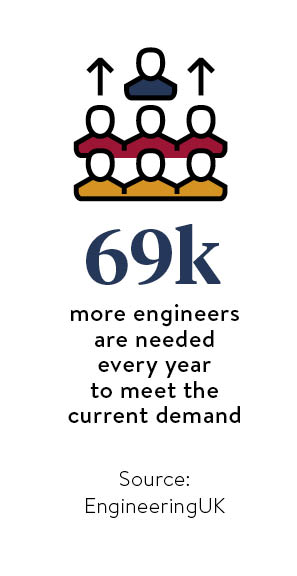 The result is a catastrophic shortfall. Industry body EngineeringUK reckons the nation needs to be producing 69,000 more engineers every year to meet current demand. That is a low score. More engineers means more prosperous employers, so demand would rise as graduation numbers grew. Training provider ECTA Training calculates that even a niche such as installing smart meters is underserved by 6,500 engineers.

Verity O’Keefe, skills policy adviser at EEF, the manufacturers’ organisation, says: “Our research shows that three-quarters of manufacturers have struggled to fill engineering positions in the past three years. Almost two-thirds of companies say that one of their key recruitment difficulties is that applicants lack the right technical skills.”

Demand spans disciplines. Ms O’Keefe explains: “Those most in demand are production and process engineers. Forty four per cent of manufacturers plan to recruit these positions in the next three years. There is also strong demand for mechanical engineers, design and development engineers, as well as engineering technicians.”

Sexism plays a role. Professor Brian Rubineau of McGill University in Canada conducted a long-term study of 700 female engineering students. The survey included voluntary diary entries to log their experiences. Professor Rubineau concludes: “Many of the women in our study experienced blatant gender bias in their project teams and internships. Much of the hands-on aspects of engineering are treated as men’s work, with women relegated to more secretarial duties.”

He says this pushed a high number of women into a different career path. Currently the Institution of Engineering and Technology estimates only 6 per cent of British engineers are women and only 3 per cent engineering technicians.

Time for the good news…

The industry knows it has a problem and for some time there’s been a huge push to change perceptions. There are dozens of brilliant schemes, such as Ada Lovelace Day, which celebrates women in science, technology, engineering and maths (STEM) – annually on the second Tuesday of October. Ada Lovelace wrote the first computer programme, devised in correspondence with her friend Charles Babbage. The letter with her earliest musing in 1843 on the idea programming can be seen in the John Ritblat Gallery of the British Library.

This year Suw Charman-Anderson, founder of Ada Lovelace Day, called for more women on industry panel events, actions against unconscious bias and for the media to make an effort to talk to more women in STEM.

Companies are taking action directly. Tata goes directly into schools and universities to evangelise. JDR, which manufactures sub-sea cables for the off-shore energy industry, runs a series of school events. Tim Ibell, professor of civil engineering at the University of Bath and until recently the president of the Institution of Structural Engineers, laments: “Engineering is not taught at school and this leads to ignorance. As you know, most people believe that we fix engines or wear hard hats permanently.”

Creativity, he stresses, is now at the heart of the profession. “Traditionally, engineering degree programmes have focused near-exclusively on the mathematics and physics, but computers now dominate this space,” he says. “After all, when we have software which can check software output, why would we wish to spend four years educating an engineering student to replicate the work of a software package?”

There’s no doubt the situation needs to change. Arts majors routinely struggle to find fulfilling work. In the United States, half of 22 to 27-year-old college graduates are “underemployed”, defined as in a job not requiring a degree. Arts graduates are two to three times more likely to be unemployed than STEM graduates. Engineers are happier in their work. The Women’s Engineering Society says 80 per cent of female engineers in the UK are either happy or extremely happy with their career choice.

EngineeringUK says the number of 11 to 14 year olds who believe engineering is desirable has risen from 27 per cent to 43 per cent in the last five years. It’s an improvement, but with a huge distance to go.

Part of the solution is persuading the brightest school leavers to stick with engineering rather than entering financial services. Alex Caccia, founder and chief executive of Oxford-based startup Animal Dynamics, which develops propulsion systems inspired by nature such as the dragonfly and dolphin, says: “Clearly the lure of the City and financial institutions is drawing talent away from engineering, and this is a terrible waste.”

Mr Caccia believes the industry simply needs to convey the joys of engineering. “Engineering is a highly creative pursuit. Solutions are first imagined, modelled, and then made and tested. It is creativity with an edge because things have to work. It is real creativity. The problems that need solving are infinite and fascinating, and far more interesting than trading coins or producing an M&A prospectus,” he says.

“I have seen many intellects dulled at the age of 45 after years in finance, whereas most engineers I know want to go on to solving the next problem and that is a life worth living.”

It’s a message we all need to communicate.