Technology may sometimes be perceived as a bitter pill, but it is the medicine that could yet save an ailing NHS 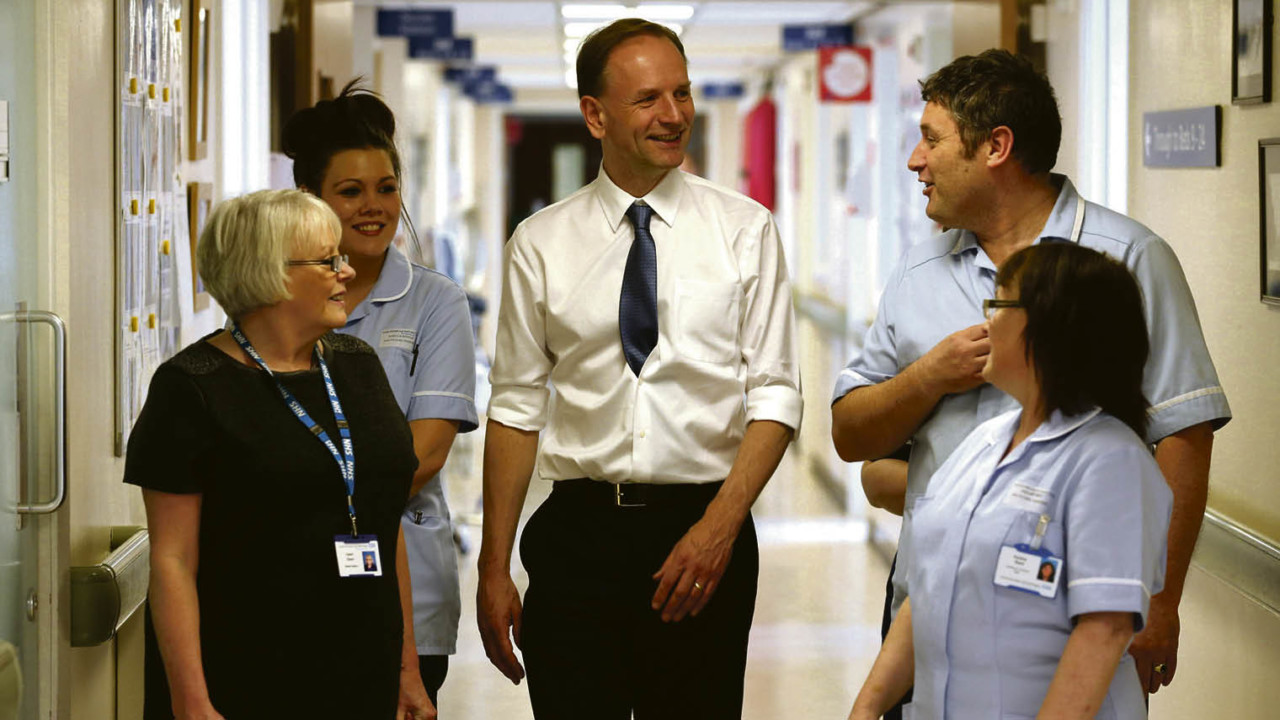 The NHS, one of the world’s largest employers, defines itself by the humanity of its dedicated and tireless staff. But the reality is that the future of the health service will probably be decided by smartphones and digital technology.

At a time of unprecedented financial challenges, together with a relentless rise in demand from an increasingly vulnerable population, apparent shortcomings of the NHS’s technological framework may have been brutally exposed.

While every other aspect of our lives has been transformed by technology, from retailing and travel to communication and banking, the consumer experience of health and social care remains much as it was before the advent of the mobile phone and the internet. For example, in the UK 86 per cent of adults use the internet, but only 2 per cent use it to contact their GP.

The technology industry has enjoyed huge success in creating consumer health products, but these are not comprehensively linked to the formal health and social care sector. The NHS itself is believed to be the world’s largest consumer of fax paper, using an obsolete technology that has largely disappeared from most other walks of life. For care professionals, from social workers to doctors and nurses, the arrival of the digital age may often have been experienced not as a force for good, but rather as an intrusive additional burden in an already pressured existence.

Against this inauspicious background, digital technology is at the centre of the NHS Five Year Forward View, the ambitious road map set out by Simon Stevens, the NHS chief executive, to create a sustainable and affordable health service by 2020. For it is now beyond dispute that better use of data and technology has the power to improve health, transform the quality and reduce the cost of health and care services.

The new strategy seeks to draw a line under previous IT initiatives, which have ended in ignominious and expensive failure. In the past, the NHS has oscillated between opposite approaches to information technology adoption, from highly centralised national procurements and implementations to the opposite extreme of highly localised, unstructured projects. The result has been systems that do not talk to each other and a failure to harness the shared benefits that come from interoperable systems.

The record of performance benefits from past investments is equally mixed. Despite the significant investment in hospital systems over the last decade, it has been estimated that across the acute sector only around 33 per cent of the potential benefits have yet been realised, particularly with regard to harnessing patient data to improve the delivery of care.

The latest approach seeks to strike a new course. Nationally, the NHS will focus on the key systems that enable different parts of the health service to work together. Other systems will be for the local NHS to decide upon and procure, provided they meet nationally specified interoperability and data standards.

A National Information Board has been established which brings together organisations from across the NHS, public health, clinical science, social care, local government and public representatives, addressing past concerns that systems were centrally imposed, instead of being developed collaboratively.

The NHS also has its first chief clinical information officer in Professor Keith McNeil, who was formerly chief executive at Addenbrooke’s Hospital. Professor McNeil acknowledges the challenge of delivering on the commitments of the Five Year Forward View, but believes the NHS is better placed than is widely understood.

“There is a varied landscape across the NHS,” he says. “There are NHS trusts that have shown foresight and courage in embracing technology, and there are others which are struggling with legacy systems at the end of their useful life.”

By way of examples, more than 96 per cent of GPs have installed digital clinical record systems and NHS Choices gets 40 million visits a month. The Spine, the NHS system for the extraction, collection, storage and transmission of data, handles more than 200 million interactions a month. The challenge is to ensure that what works well is shared across the NHS while continuing to improve the interface between systems, to ensure patient information flows seamlessly to different care providers from, say, dentist to GP to social care provider. 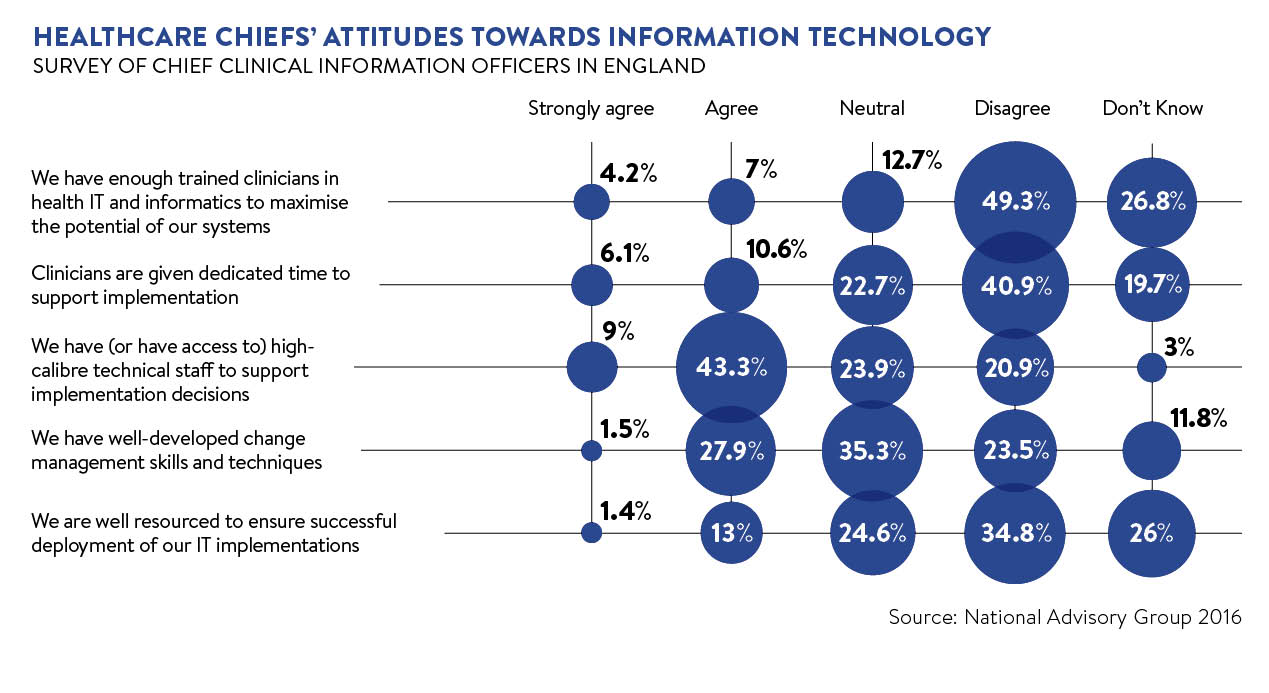 Some of the barriers to improving the implementation of digital technologies are comparatively mundane and easily overcome, including a lack of universal wi-fi access, a failure to provide computers or tablets to ward or community-based staff, and outmoded security procedures that, by frustrating health and care professionals, encourage inappropriate workarounds.

“There is much that we can achieve through some fairly basic investment, such as up-to-date powerful wi-fi, which would improve the effective use of apps,” says Professor McNeil. The NHS is working to create an expanding set of accredited health apps that patients will be able to use to organise and manage their own health and care, while forging partnerships with the voluntary sector and industry to support digital inclusion.

The government has announced investment of £4.2 billion in technology for a paperless NHS by 2020, but making the economic case for investment in IT is a challenge at a time when frontline care is struggling. Professor McNeil says: “In IT, money is always a constraint. But the funding is mostly available. There is enough money to kick-start an IT revolution. What we have to do is to demonstrate a return on investment, both in terms of improved patient care and productivity gains.”

Earlier this year, NHS England awarded £100 million to the most digitally advanced trusts to become centres of global digital excellence. The trusts will lead the adoption of digital technologies into acute care provision and support workforce development, including the development of a next generation of chief clinical information officers.

Professor McNeil concludes: “The good news is that the National Information Board lays out a good platform that gets us to where we want to be. It is exciting and achievable.”