How “synths” and smartphones will affect our lives

If you believe television series like Black Mirror and Humans, the future is far from bright and it is all technology’s fault. If you believe those near-future plot lines, we will be driven insane by virtual reality, become hyper-obsessed with achieving likes and, eventually, start to resent the robots that are taking our jobs and seek to destroy them.

Yet Black Mirror is not all black. San Junipero, one of the episodes in the new series that recently debuted on Netflix, shows that there may be a silver lining. Instead of ending our days in dreary care homes, we will instead live as younger versions of ourselves in racy Californian coastal cities listening to 80s music and having lots of experimental sex.

But some of the newest innovations may strike fear into the hearts of older generations at the same time as millennials become obsessed with them.

The rise of virtual assistants

At the crest of this new technological wave are voice-controlled assistants such as Amazon Echo and Google Home, a baby step on the long road to the “synths” that star in Humans.

Amazon launched Echo, a voice-controlled speaker powered by an artificial intelligence service the company calls Alexa, in the United States in November 2014 and in the UK this September. The device gives access to thousands of “skills”, such as playing music, querying Wikipedia or providing a weather forecast. Google launched its own voice-controlled virtual assistant Google Home in the US a month ago, although no UK launch date has yet been announced.

Although Amazon has not officially released sales figures for its Echo unit, some analysts put the number at more than four million. Sales of Google’s Home are likely to be impressive too.

Mr Jeronimo says: “When a new technology emerges, there is always some delay before users can understand how they can benefit from that technology. The first mobile phone appeared in 1973 and it is only today we see penetration rates of close to 100 per cent.”

Will they really catch on?

Looking at global sales figures for wearables – 22.5 million in the second quarter of 2016, according to IDC – it is tempting to think that such technologies are just for nerds.

“What we are seeing now is that with some of these technologies such as wearables and virtual reality the value proposition is not yet strong enough,” says Mr Jeronimo. However, he believes this will eventually happen just as it did with mobile phones.

“We strongly believe these technologies will disrupt the way we consume content and interact with digital information,” he says.

What virtual reality and wearables are waiting for is the killer app that gets consumers to realise these new technologies are indispensable.

“This is basically what happened when Nokia launched SMS,” says Mr Jeronimo. “It is the same with smartphones. Ten years ago, people didn’t recognise they needed their e-mails or access to Facebook and Twitter while on the move.” 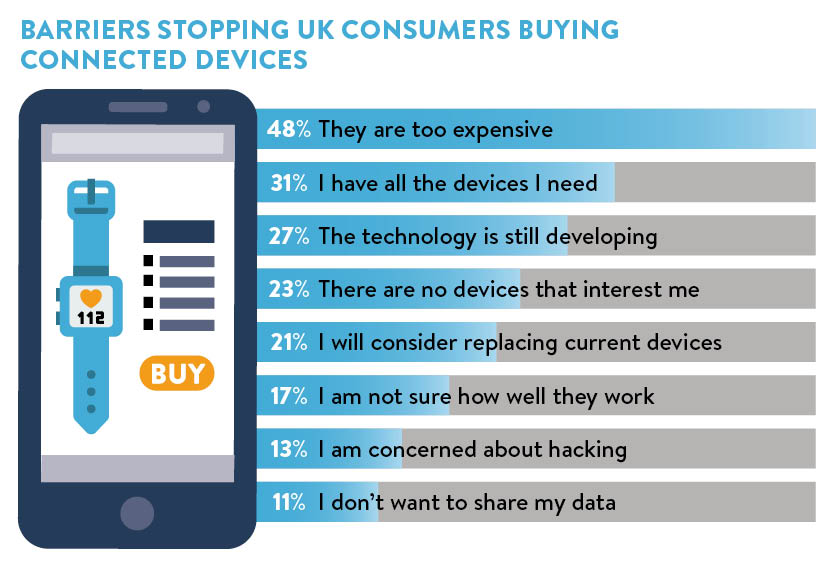 Is it possible, then, that the nightmare scenarios depicted in some of today’s most popular television shows are curing us of our technology addiction?

The writers of Humans, Jon Brackley and Sam Vincent, are sure programmes like theirs do not put people off technology. “People can tell the difference between a murderous fictional android and a helpful gadget,” they say. “Science fiction has never slowed the march of technological process, no matter how nightmarish the scenarios it presents.”

The pair read extensively to keep up to date with developments in technology and extrapolate imaginatively so their show does not date too quickly.

Would they welcome synths in their own lives? “Yes,” says Jon, “from a combination of laziness and curiosity.” Sam is undecided; he feels that being around synths would warp the empathetic development of his young kids.

Others say that the fear of technology is rooted deep within our brains. “Anything new is seen as a threat,” says neuroscientist and senior MIT lecturer Tara Swart. “We are seeing a very obvious generational divide. Children who have only ever grown up with smart devices have adapted to that. People who are 40-plus have had to take new things like the internet and mobile phones on, and each of those things are a perceived threat.”

As humans, we have faced this fear of the new many times. “When humans discovered fire, it caused a step-change in the way that we became successful as a species. Technology can do that as well. People around the world are being connected and having access to things they did not before,” says Dr Swart.

Technology is changing us in subtle ways, she says, pointing out clear differences in certain brain functions since the advent of mobile phone technology.

“I know the phone number of the house I grew up in and of the parents of my friends. I don’t know my partner’s or my friends’ numbers. I don’t need them now,” she says. It is as if we have outsourced our memories to our iPhones and Google.

There is the argument that if people did not have to do jobs that could be easily automated then this would give them more time to, for example, be creative, take more holidays or engage in more leisure activities. What is not clear is how, without a job, we will afford to pay for these activities.

According to Tesla and SpaceX founder Elon Musk: “There is a pretty good chance we end up with a universal basic income, or something like that, due to automation. People will have time to do other, more complex, more interesting things and have more leisure time.”

His idea is not yet another of the visionary’s distant dreams. Switzerland recently asked its citizens whether it should introduce a universal income at a proposed level of 2,500 Swiss francs (around £2,000) a month. The proposal was rejected 77 to 23 per cent.

Dr Swart, who has just been appointed as neuroscientist in residence at London’s Corinthia Hotel where she will talk to guests about the effects of new technology on the brain, concludes: “People watch such programmes because they don’t want what is portrayed to happen to them. Exposing yourself to these ideas is a way of reminding yourself to keep safe.”