Collaboration is often dismissed as a nebulous concept and one that does not have many tangible benefits.

Yet an increasing body of research is showing that working together makes companies more productive and drives higher returns for shareholders.

A recent American study of 1,100 companies carried out by the Institute for Corporate Productivity and Professor Rob Cross of Babson College in Massachusetts found those that promoted collaborative working were five times more likely to be high performing.

In 2008, a University of Maryland meta study of 72 different pieces of research highlighted significant benefits from using agile software development, essentially a collaborative approach, to a more traditional waterfall approach. It showed significant improvements in costs, reduced timescales, productivity and return on investment, for example.

In fact, even the perception of collaboration can improve outcomes. A Stanford University study by Priyanka Carr and Gregory Walton found that participants exposed to cues of working together persisted longer on a challenging task, enjoyed tasks more and performed better. 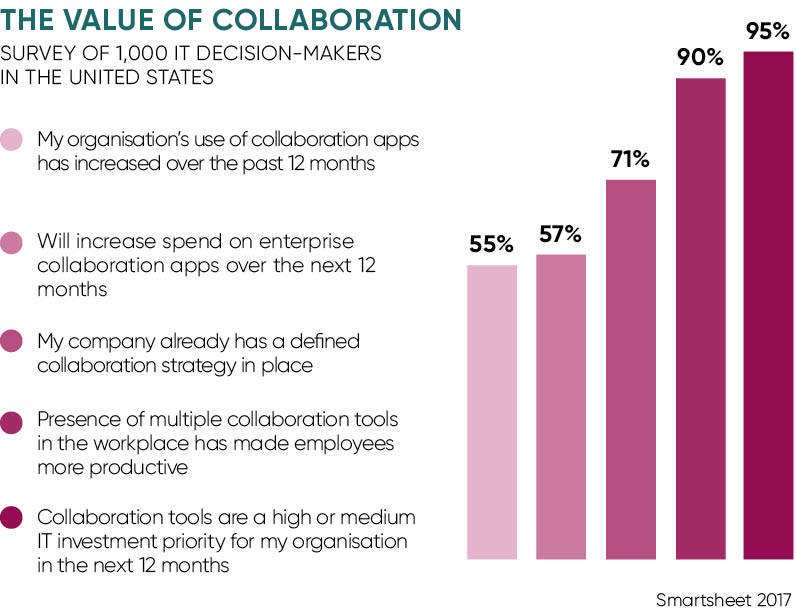 One of the reasons for this is that the traditional hierarchical structure that has formed the backbone of organisations for centuries is under assault.

Increasing volatility in the world and complex business environments, brought about by technology, geopolitical uncertainty and globalisation, mean chief executives are constantly seeking new and better structures for their businesses.

Organisational silos are almost inevitable, according to Graham Winter, former chief psychologist for the Australian Olympic team and founder of Think One Team, a consultancy which helps companies work as single teams, regardless of traditional boundaries.

“Humans naturally form into small groups (teams) and larger communities (tribes). People will identify with those groups, often more strongly than the wider enterprise in which they work,” he says.

It is the job of leaders to connect these people, teams and tribes by promoting a shared purpose, fostering shared values and ways of working, and building relationships between individuals.

Companies that are “born digital” appear to recognise the value of collaboration better than most, perhaps because they start out with flatter structures and also because collaboration tools are helping them work across normal boundaries.

They also have a habit of using less technological tools. Google, for example, designed its Googleplex headquarters to increase the likelihood of chance meetings and offers employees the chance to use seven-seater conference bicycles to have meetings on the move.

Yet there are risks, says Mr Winter. “The trade-off for some is how to do ‘deep work’ in a high-interruptions environment,” he points out.

Make it two way, and use multiple methods like town halls, video and face to face

Mr Winter says that establishing an established rhythm of communication is critical. “Make it two way, and use multiple methods like town halls, video and face to face,” he says.

Technology companies are obvious users of collaboration platforms such as Slack. The company’s Europe, Middle East and Africa head Johann Butting says 3 per cent of the UK’s knowledge workers are now using Slack on a weekly basis and growth is ticking up at 100 per cent year on year.

Mr Butting says tools such as Slack work because they break through silos. “It is very easy for a person in the marketing team to run a search over Slack and work out what engineering is doing on a product they will have to market in two quarters’ time. They don’t need to ask for permission.”

He adds that organisational structures are changing and this is impacting how people work: “We are seeing more millennials in the workplace, and they work and communicate. Successful companies are adapting how they organise themselves. We are seeing hierarchical, top-down structures being replaced by bottom-up ones that are more dynamic.”

The benefits of using collaboration tools are real and are recognised in a number of different ways, says Mr Butting. Companies using Slack report and average 49 per cent reduction in email volumes, 25 per cent drop in the number of meetings and, perhaps most importantly, a 32 per cent increase in productivity.

Part of this productivity boost comes from reducing the 800 or so applications he estimates that the average large UK company uses.

Failing to do so can have far more serious consequences than just a poor working environment.

In 2014, US car manufacturer General Motors belatedly started a recall of more than 20 million cars to replace defective ignition switches, which could cause the airbags to stop working while driving, despite knowing about the problem for many years.

GM ended up having to pay compensation to the families of 124 people believed to have died as a result of the fault and also forfeited $900 million to the US government.

A subsequent report into the recall said the company’s employees repeatedly “failed to search for, share or gather knowledge” and that “breakdowns in communication between and within groups were a critical part of the failures”.

Think that collaboration is something fuzzy? Think again.