That’ll Be The Day may have been as apt a summary of the chances of spectacles ever becoming fashionable as a good title for a Buddy Holly song. But it was perhaps Buddy Holly who changed the way glasses were perceived from a medical aid signalling a deficiency to a means of self-expression and personal branding.

Holly performed almost blind for years before his manager suggested that the large black frames he wore in private could, in fact, become a part of a powerful signature style. It worked. This was the 1950s. By the following decade, other stars, rather than blend anonymously into an archetype, were standing out in part by wearing glasses.

As Michael Caine put it: “Film stars to me were always six feet four, had perfect teeth, could do handstands on Malibu Beach and didn’t [like himself] need glasses.”

If a latent negativity about glasses remains – it is said that a US presidential candidate would lose crucial electioneering points for daring to express a frailty so blatantly – so is the appeal of their deeply embedded cultural and psychological power to not only suggest intellectualism to others, but even to make the wearer feel smarter themselves.

The very nerdiness that once saw glasses shunned now sees them embraced. But while sunglasses, first worn outside of sport and aviation circles by Hollywood stars to protect their eyes from studio arc lights, have always been cool, in part born of the mystique in hiding the eyes, the acceptability of prescription frames, indeed the ability of glasses to connote stylishness, has not been so easily won.

“You started to see people differentiate themselves through wearing glasses and through their choice of glasses, as early as the 1920s with the birth of mass-market fashion and consumerism,” says Claire Goldsmith, managing director of frames brand Oliver Goldsmith, named after her grandfather, whose specs company brought a certain visual distinction to the likes of Peter Sellers, Princess Margaret, Eric Morecambe and the Two Ronnies.

“But it was really in the post-war years, again with another consumer boom, that we started to see shifts to more extreme styles. That in part was due to new materials; certain plastics, for example, became accessible and they allowed for colour and pattern. The idea of the fashion brand was developing too then. I don’t think eyewear has really looked back since.”

Certainly, while many people in the public eye – James Dean to John Lennon, Woody Allen to Iris Apfel – have stuck largely to a single style of frames, conscious perhaps of how their choice is key to their public image, the diversity of frames and potential to experiment with identity has grown exponentially.

Much as clothing has been revolutionised by “fast fashion”, allowing a turnover of trends so rapid as to seemingly make all trends current all the time, so now an eyewear maker is far more likely to make styles original to its brand than follow industry trends.

This is reflected in the last decade’s explosion in niche independent makers, alongside giant manufacturers the likes of Marcolin and Luxottica, among them Jono Hennessy, Spy, Bruno Chaussignand, ic! berlin, COLAB and Kirk & Kirk.

Some push technology to give new ideas of what frames can be. French maker Undostrial, for example, makes hinge-less styles from one-piece surgical steel with the temples held in the closed position using an innovative magnetic system, while lenses are held in place using a nylon string. Every part of the spectacles can be disassembled and replaced if necessary.

Yet at the other extreme are makers such as Rolf Spectacles, creating frames not out of hypoallergenic acetate propionate, but from wood, right down to the hinges. Given wood’s grain and patina, consequently each pair is unique, a fact which chimes well with the current market.

“The demand for more interesting glasses grew out of the vintage revolution,” says Marie Wilkinson, creative director of frame makers Cutler & Gross. “That created a craving for unique pieces and a movement that was very much not about wearing a brand. Rather we’ve seen all these new young, often largely unheard of but extremely creative makers come to the fore.

“It’s not easy to launch an eyewear company. It crosses craft, design, production, meeting high regulatory and medical standards, working with opticians as much as appealing to fashion people. And yet the numbers of those launching is a reflection of demand. The growth in the frames market is akin to how demand for handbags exploded.”

As with clothes, through different glasses we can be different people

But, the attachment of a great aunt to hers aside, perhaps at least the handbag did not have to go through a radical image overhaul to become an object of desire. Steenie Hudson, proprietor of the Eye Company, a London retailer that works a lot with the film industry, argues that the individuality in glasses increasingly being sought is thanks to the fashion media’s crucial role in changing the associations we make with glasses, and over relatively recent times at that.

“If sunglasses had associations with sport and celebrity, optical frames were the stuff of academics and your local vicar – hardly aspirational,” he notes. “When I was a kid, wearing glasses meant getting beaten up. But the fashion press has shifted the idea of glasses from appliance to accessory, such that people want stronger and stronger styles all the time now.

“And I don’t see that association with style changing. There’s a generation gap, but younger people just don’t have those negative connotations in mind anymore. They’ve grasped the idea that, as with clothes, through different glasses we can be different people.”

The style that just won’t go away, but now focusing on pre-war looks of the 1930s and even 1920s, with round glasses especially popular.

Looking further back to the 19th century, a “steampunkish” mood sees styles with side-shields and a hand-wrought aesthetic.

Frequently reinvented, the period’s penchant for super oversized frames, heavy squares and even futuristic styling is back again.

The glasses of tomorrow are expressions not just of mechanical tech, the likes of screwless hinges, but also of production methods such as 3D printing in titanium.

With exaggerated proportions and rich detailing, these are increasingly the go-to women’s style, having shed their old-fashioned image. 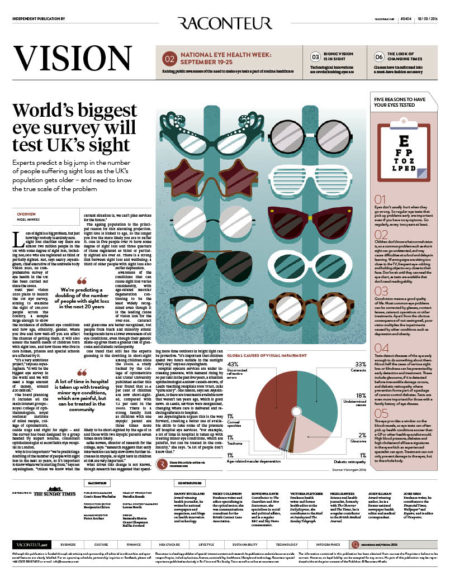