It is a matter of when, and not if, a pandemic will strike, so how prepared are we to combat a deadly virus infecting millions around the globe? 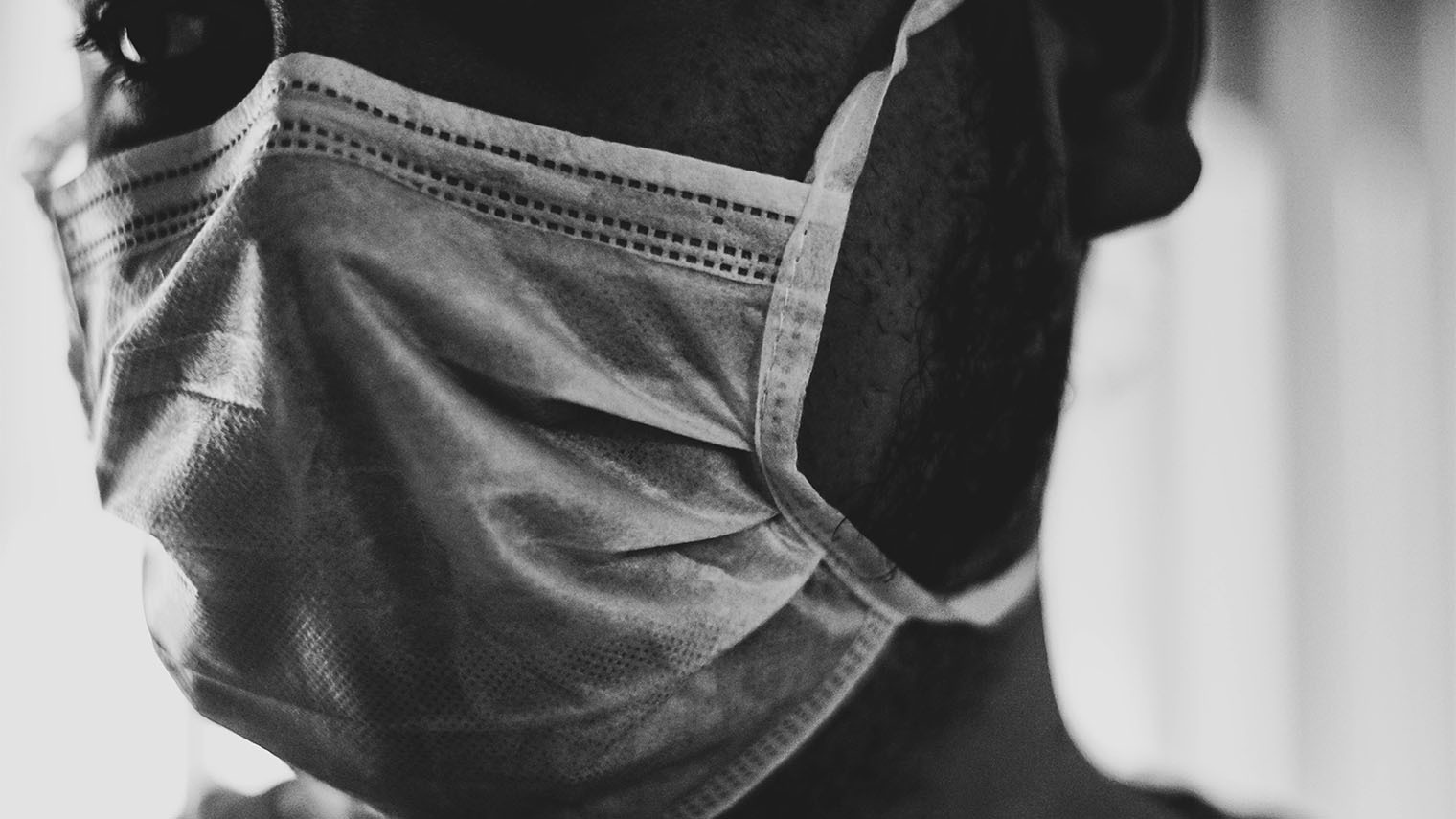 A few months ago, the death of 9,000 chickens on a single farm in northeast China didn’t make global headlines; perhaps it should have. The poultry died from the lethal H7N9 virus. No humans suffered this time, yet this flu kills more than one in three people who catch it; 623 have already died in Asia. The next coughing bird could be incubating a lethal virus that humans could pass on too.

Like climate change, death and taxes, a global pandemic is a certainty, and with the 100-year anniversary of the Spanish flu making headlines, there’s now a lot more interest in the next large-scale epidemic and what it could look like. In 1918, up to 100 million people died, this time the death toll could be three times as much, more than the population of America.

This sounds like a marketed brand, yet it isn’t just an idle alarmist worry

The new contagion might be a mutated form of the H7N9 virus evolving fast in the petri-dish-like pools of humanity who live cheek by jowl with their animals in China. It could come from other lethal candidates touted in a top-ten blueprint list released by the World Health Organization (WHO) earlier this year: Ebola, Zika, MERS, SARS, Lassa fever or Rift Valley fever. Then there’s Disease X.

More elusive than the others, this is not a specific illness, but a hypothetical disease, like our potential new bug incubating in the poultry of Liaoning Province. “We just don’t know where the next will strike. We cannot predict it. There is also the natural evolution of diseases already out there,” explains Professor David Heymann of the London School of Hygiene and Tropical Medicine.

After all, new pandemics appear surprisingly frequently. AIDS in 1981, Nipah in 1998, SARS in 2003, H1N1 swine flu in 2009 and MERS in 2014, each were the Disease X of their time. “This sounds like a marketed brand, yet it isn’t just an idle alarmist worry. It describes the regularly observed phenomena of previously unknown viruses suddenly appearing and spreading in human populations,” says Dr Jonathan Quick, chair of the Global Health Council.

“Our greatest fear is being blindsided by a new virus, most likely due to animal-human spillover, which then readily spreads from human to human, has at least a 5 to 10 per cent fatality rate, does not respond to existing medicines, and for which an effective vaccine and accurate diagnostic test cannot rapidly be developed. Then there’s the nightmare scenario of catastrophic mutations rendering existing viruses like flu, SARS or MERS highly contagious and deadly.”

The mega-trends don’t bode well either. Mankind is a growing “food source” for our planet’s hungry bugs. More than 50 billion chickens are reared each year, as well as 1.4 billion pigs. All hotbeds of disease. We’re travelling more and urbanising rapidly, which puts us in closer contact with each other and animals. We’re also projected to eat more meat, meaning more animals and potentially more antibiotics to keep them healthy, therefore more resistance to the antibiotics.

“A virulent respiratory virus spreading as fast as flu can reach all major global capitals within 60 days now. By June this year alone we saw concurrent outbreaks of six of the ten diseases in the WHO blueprint list of priority diseases,” says Dr Richard Hatchett, chief executive of the Coalition for Epidemic Preparedness Innovations, which aims to derail epidemics by speeding up the development of vaccines.

“A highly virulent and transmissible virus like the Spanish flu could kill millions around the world within months. This may lead to widespread societal disruption, destabilisation of governments, and widescale shutdowns of international travel and trade.” 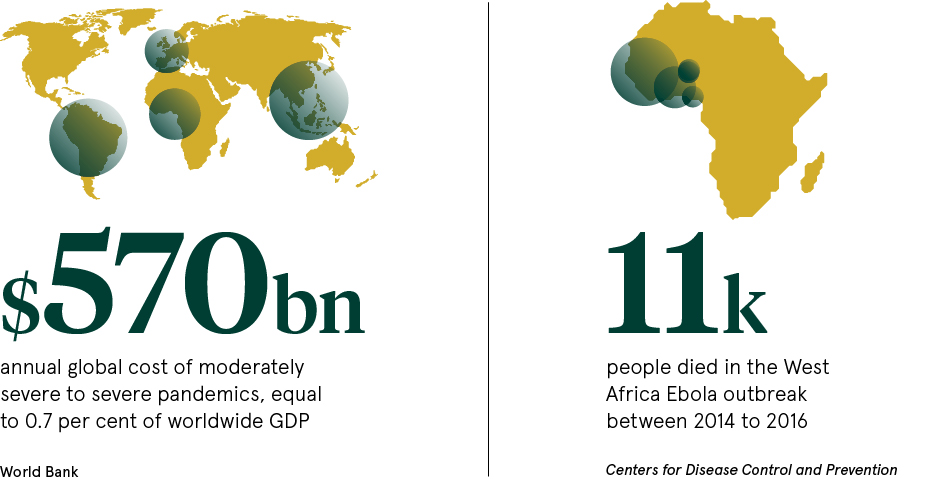 The hefty cost of the next pandemic

We’re also talking huge costs. The World Bank estimates the price tag of a new pandemic could top $570 billion or 0.7 per cent of global income. This is enough to raise a few eyebrows in government, industry and civil society. But with pandemic preparedness, mankind needs to invest big now, not wait until people drop dead, otherwise we suffer from what World Bank president Jim Yong Kim calls the “cycle of panic and neglect”.

“Experience and fear appear to be key motivators for change. We cannot expect that suddenly throwing large sums of money at an issue when it emerges will result in a positive outcome when the pre-existing capacity is simply not present,” says Dr Arlene King, adjunct professor at the Dalla Lana School of Public Health, University of Toronto.

The Ebola outbreak in west Africa four years ago, which led to 11,000 deaths and cost at least $2.8 billion was a case in point, but it did result in one small slither of a silver lining; it was a turning point in how we tackle epidemics.

“We now have the framework for a true global response that has grown out of this; the authorities are getting better at communicating what they know and what they don’t know,” says Dr Irene Lai, medical director of medical information and analysis at International SOS.

Collective action is vital in preparing for Disease X

Those involved in the disease control community are slowly starting to break the cycle of complacency that has characterised past responses, realising collective action is now crucial.

“These diseases do not respect borders, so as well as the medical challenge they pose, they also challenge our political and inter-governmental systems. No single measure alone is sufficient,” explains Dr Hatchett.

Mankind is also getting better at real-time surveillance and employing early-warning systems. At least a half dozen universal flu vaccines are undergoing human clinical trials, although they may not combat Disease X. The next frontier will be dealing with antimicrobial resistance and fake news.

“The biggest gap in epidemic prevention is the lack of a collective strategy for combating junk science and junk news,” cautions the Global Health Council’s Dr Quick. The battle is on.