Many battles to win the war for fitness

The first thing was a cry of pain and frustration, says Colonel David Richmond. “Then it was confusion and concern, because you’re completely incapacitated. Done. I knew I was out of the battle and utterly reliant on others to keep me alive.”

On June 12, 2008, Colonel Richmond, then of the Fifth Battalion of the Royal Regiment of Scotland, had been commanding his battle group just north of Musa Qaleh in Afghanistan when an enemy round passed through his right leg, shattering part of his femur.

Colonel Richmond was badly injured in Afghanistan in 2008

He received treatment from a medic in the field before being taken to Camp Bastion in Helmand Province where Army doctors worked to stabilise his condition. Two days later, he was transported by air to Birmingham’s Selly Oak Hospital, where he underwent further surgery and stayed for five-and-a-half weeks before moving to the Ministry of Defence medical rehabilitation centre at Headley Court, Surrey.

But the consequences of his injury and the length of time required for his recovery would take a while to sink in. “I was a bit slow on that,” he admits. “I had no conception of just how long it would be. If you had told me within 48 hours of being shot that it was going to take four years to get into a reasonable state, I would have laughed at you.”

Shortly after arriving at Headley Court, where 300 staff treat 20,000 patients each year, Colonel Richmond had a series of meetings with physiotherapists, occupational therapists and exercise rehabilitation instructors who began to devise a strategy for his recovery. This was when his rehabilitation began in earnest.

The colonel knew he would repeat a six-week cycle of staying on a ward at the facility for four weeks before returning home for a fortnight, but other than that the unpredictability of the process meant there was little in the way of a concrete plan and certainly no straightforward roadmap to follow.

“I’d lost 10cm of bone [from the femur],” he says. “That’s a lot to grow back and so it wasn’t a smooth ride. If you’re really lucky, then everything goes to plan, but real life tends to get in the way.”

If you had told me it was going to take four years to get into a reasonable state, I would have laughed at you

After a short-term fix in the days immediately after his injury – a pin was inserted into the damaged bone in order to keep it together as much as possible – Colonel Richmond underwent a procedure in which his leg was rebroken in two places – above the knee and below the hip. He was then fitted with a device known as an external fixator, a metal and wire structure that is attached to the bone beneath the skin, but which also has a framework that is external to the body.

These external parts of the device include screws that are turned regularly to pull the remaining bone in such a way as to encourage it to grow and, eventually, bridge the gap left behind by the tissue that was too damaged to be salvaged. “A deeply painful experience,” is how Colonel Richmond describes it with, you sense, a hint of understatement.

Colonel Richmond’s rehabilitation included physiotherapy and gym work, and saw him benefit from some of the highly specific equipment at the £8.5-million Help for Heroes Rehabilitation Complex at Headley Court, including a sports hall with a sprung  floor, a cardiovascular gym, a gait analysis centre and an anti-gravity treadmill, which allows patients to run with less pressure on their joints and muscles.

Despite all this, he was to suffer a major setback. Some of his new bone tissue ended up being bent and meant that more surgery was required. “That knocked me back a year,” he says. “It’s not a straight line from being completely unfit to being fit again; it’s a rollercoaster. And that was a real hit. Emotionally that was really hard.

“I can’t tell you the number of days I’ve lied back on my exercise matt at Headley Court and thought: ‘Another bloody day of this. Is it making any difference?’ It hurts, you’re not feeling very well and you’re working really hard, not knowing whether you’re actually making progress. But then you pinch yourself, or your therapist gives you a kick in the bum, and you get on with it.”

But it wasn’t just Colonel Richmond who had to dig deep. His wife and two young daughters were affected by the process too. “It was hard for them,” he says, his voice wavering for the first time during our conversation. “It affected them for a few years and we had to pick up the pieces. All our daddies are indestructible, particularly if you’re a little girl and your daddy charges off with a rifle in his hand. Then, they discover you’re not so indestructible after all. It’s hard for them to take and it’s actually really hard for dad to take as well.” 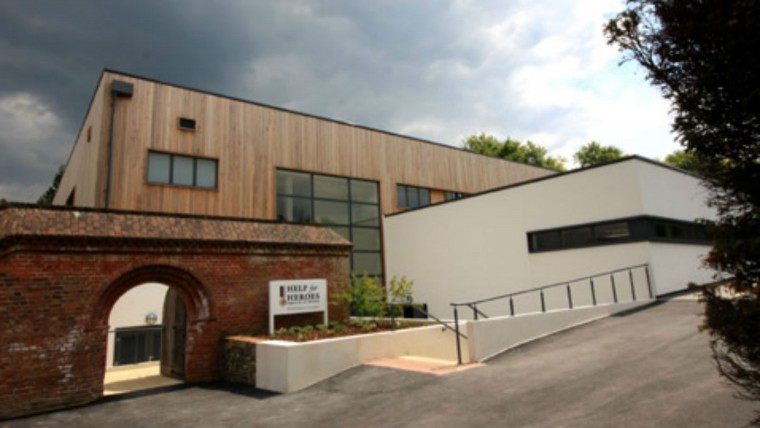 Colonel Richmond says he was lucky in that he didn’t require much formal help with the psychological and mental side of his recovery. He spoke to a psychiatric nurse and a social worker at Headley Court when there was anything that he felt he needed to get off his chest and also drew on the support of Help for Heroes’ Band of Brothers network. But he acknowledges that there are those who need more.

There is some debate concerning the nature of the possible link between tours of duty in hostile environments and subsequent mental health issues, but a BBC Panorama investigation used freedom of information requests to discover the number of serving soldiers and veterans who took their own lives in 2012 – 50 in total – exceeded the number of British soldiers who died in Afghanistan in that year – 44 in total (40 in action).

For his part, Colonel Richmond says the macho nature of the Army means there is often a stigma attached to accepting that you need help with your mental and psychological wellbeing. “But the stigma is largely self-imposed because it’s more accepted now than it ever has been,” he says.

Today, Colonel Richmond works full-time for Help for Heroes as recovery director, taking responsibility for the charity’s four recovery centres. His injury means that he will never regain full strength or mobility in his damaged leg, but he has passed some major milestones on the road to recovery.

The first was standing unaided, which came towards the end of 2008. He then progressed to walking and later, once the external fixator had been removed, was able to cycle on a stationary bike in the latter half of 2011. He ran properly for the first time in March 2012 and, almost unbelievably, completed a triathlon – 2.4-mile swim, 112-mile bike ride and 26.2-mile run – in July of the same year.

But just as the extent of his injury took a while to dawn on him, it wasn’t until sometime after the race that Colonel Richmond was able to take stock of his rehabilitation. He says: “Three weeks later, I was driving to work at Tedworth House [Wiltshire]. I was thinking about the whole experience and the overwhelming feeling I had was – I’m back.”