It is recommended that we all have an eye test at least once every two years. But research shows that 20 million people in the UK fail to do this annually. And even more worryingly, one in ten people admit to never having had an eye examination, ever, in their lifetime.

Omar Hassan, head of professional services at Vision Express, comes up against this attitude all too often. “Eye sight is one of the most important senses we have. We acquire most of our information about the world around us through visual cues. But most people take it for granted and don’t go for regular eye checks, particularly people under the age of 30. Most people visit the dentist far more often,” he says.

“It’s exacerbated by the fact that we only know what we can see. Most people probably don’t know what they’re missing when their vision is deteriorating. I see people all the time who are squinting to read or bringing their phone right up to their face to be able to text, who insist their eyesight is fine. Of course, it’s not, but they just don’t realise it. Their vision is already affecting them, but they’ve adapted and adjusted to deal with it.

“There’s no need to struggle on though as these vision changes can be detected and you can get glasses or contact lenses to help. You don’t have to put up with it.”

If you don’t know the extent of an eye test, or even if you do, it’s still easy to neglect our eyes. Problems affecting the eye rarely hurt or cause problems and changes in our eyesight can be gradual or dismissed as a normal part of ageing, says Mr Hassan.

“Our vision changes throughout life. The normal physiological changes in our eyes are inevitable. But when that happens is open for debate; some people say that our vision is already starting to decline by the time we reach 45,” he says.

“Just like a toothache can be a signal to visit the dentist, noticing changes in your eyesight is a sign of a potential eye condition that needs detecting through an eye test at a standard high street optician and correction by a qualified optometrist.”

An eye test is a powerful weapon in the armoury to fight illness and maintain general wellbeing, as well as eye health. In addition to detecting common eye conditions and changes in vision, giving the opportunity to correct any sight loss, an eye test can spot signs of more serious underlying health problems, including diabetes, high blood pressure and eye cancers.

An eye examination at a high street opticians should include a test of visual acuity or reading letters of various sizes from a chart. In addition, there should be an assessment of your eye power, near or far-sightedness, balanced eyesight, a visual field check for “blind spots” and, if necessary, an optometrist can issue you with a prescription which can be used to purchase spectacles or in preparation for a contact lens trial.

But there’s more to a test than meets the eye. In the eye health assessment, an optometrist will conduct a careful inspection from the front to the back surface of the eyes, using an instrument called an ophthalmoscope or Volk Lens. With this piece of equipment the optometrist can detect indicators of conditions, such as diabetes or high blood pressure, by observing changes to the fine blood vessels within the eyes. Other common eye conditions, such as cataract and macular degeneration, can also be detected.

A test of the pressure inside the eye can detect glaucoma, a condition which can affect sight, usually due to a build-up of pressure within the eye.

During a comprehensive eye test an optometrist will usually use an instrument called a tonometer to measure the pressure inside your eyes, known as intraocular pressure. A puff of air is directed into the eye, measuring intraocular pressure based on the eye’s resistance to the air. It only takes a couple of seconds to perform, there’s no contact with the eye itself, and it can give valuable information about the health of your eye and any indicators of more serious eye conditions. Caught early, these can be corrected and treated.

A further test available at some high street opticians is called digital retinal photography, which uses a special camera to take a photograph of the inside of your eyes. The picture is a detailed image of your fundus – the back of your eye – enabling you to see what the optometrist sees. As well as recording a permanent digital photographic reference of your eye health for future comparison at subsequent eye tests, this can reveal a lot about your eyesight, your overall wellbeing and can even flag up underlying health conditions.

In fact, there are more than 100 different ways an optometrist can assess how your eyes are working during an eye test, in addition to asking questions about your general health and lifestyle.

Yet, despite all the technology and eyecare solutions available, people can be stoical in persevering with their vision loss, which Mr Hassan says can make problems even worse as early detection can make treatment and management easier.

“Our customers don’t tend to come in a day or two after noticing a problem, but one or two years later,” he says. “They have been struggling all that time, because vision changes are encroaching. Losing vision might be the first sign. When people start to notice is when it affects their daily lives – driving, reading, using the computer at work and so on. The earlier it’s identified the easier it is to resolve or manage.”

Mr Hassan says everyone should exercise their right to an eye test; for many people, including people aged over 60, a test is free. It’s important to know what to expect and there are guidelines laid down by the College of Optometrists which set out what should be included in an eye health assessment. 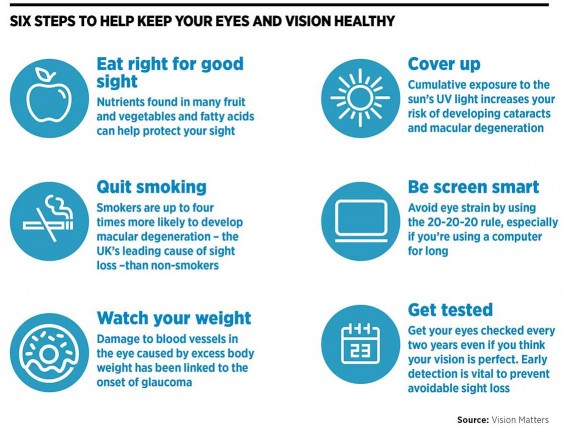 Every optician should take a detailed history, ask about any symptoms you might be having, your medical and eye-related history, and your daily lifestyle. They should also measure your vision and visual balance, and look at the back of your eye to spot other health problems. An optometrist will be able to refer you to an ophthalmologist or a specialist eye hospital if they notice any abnormalities, such as glaucoma, cataracts, trauma to the eye or dry eye disease.

If you’re one of the 10 per cent of people who has never had an eye test, it’s still not too late to include it as part of a regular, overall health check. As Mr Hassan concludes: “The fundamental thing is to remember to go and see an optician at least every two years.”

WHAT EYE TESTS CAN TELL YOU ABOUT YOUR WELLBEING

1. Hypertension and risk of stroke

A stroke is a brain attack which happens when the blood supply to the brain is restricted. High blood pressure is one of the biggest risk factors for stroke and contributes to more than half of all strokes in the UK. During an eye test an optometrist looks at the small blood vessels in the back of your eye, to check for any damage caused by high blood pressure. Dr Dale Webb, director of research and information at the Stroke Association, says: “Anyone with concerns about their eye health should have a chat with their optometrist.”

Age-related macular degeneration (AMD) is the UK’s leading cause of sight loss. It’s caused by damage to the macular, part of the retina at the back of the eye that is densely packed with light-detecting cells. High street opticians can check for AMD as part of an eye test. Some may use photography or other imaging to detect early signs. If diagnosed, you may be referred to a hospital to see an eye specialist to confirm the diagnosis, and receive support and treatment.

Looking at the back of the eye reveals whether or not your optic nerve is within normal parameters. Any subtle changes indicative of glaucoma can be monitored by an optometrist or referred to an ophthalmologist for treatment. There are a variety of diagnostic tools which can help spot whether or not you have glaucoma, even before any symptoms develop. However, not all tests are used during a high street eye test, so ask your optometrist which test is available.

A substantial body of evidence already suggests that changes to the tree-shaped patterns of veins and arteries in the eye can be linked to a number of diseases, such as stroke and cardiovascular disease. Now researchers at the University of Dundee are leading a £1.13-million project to help establish if an eye test can be used to reveal the early stages of Alzheimer’s disease. The three-year study is using specially developed computer software which analyses high-definition images of the eye to establish whether such changes can act as an early indicator of Alzheimer’s.

There is no national screening programme in the UK for eye cancer as these cancers are not common and there are no specific screening tests. However, cancerous growths can occur inside the eye as in any other part of the body. Cancer Research UK says regular eye tests can provide the means to spot signs of eye cancer early. By looking inside the eye, an optometrist is able to see any growth, and make an urgent referral to a specialist for further investigation and treatment. Early detection can improve the chances of successful treatment.