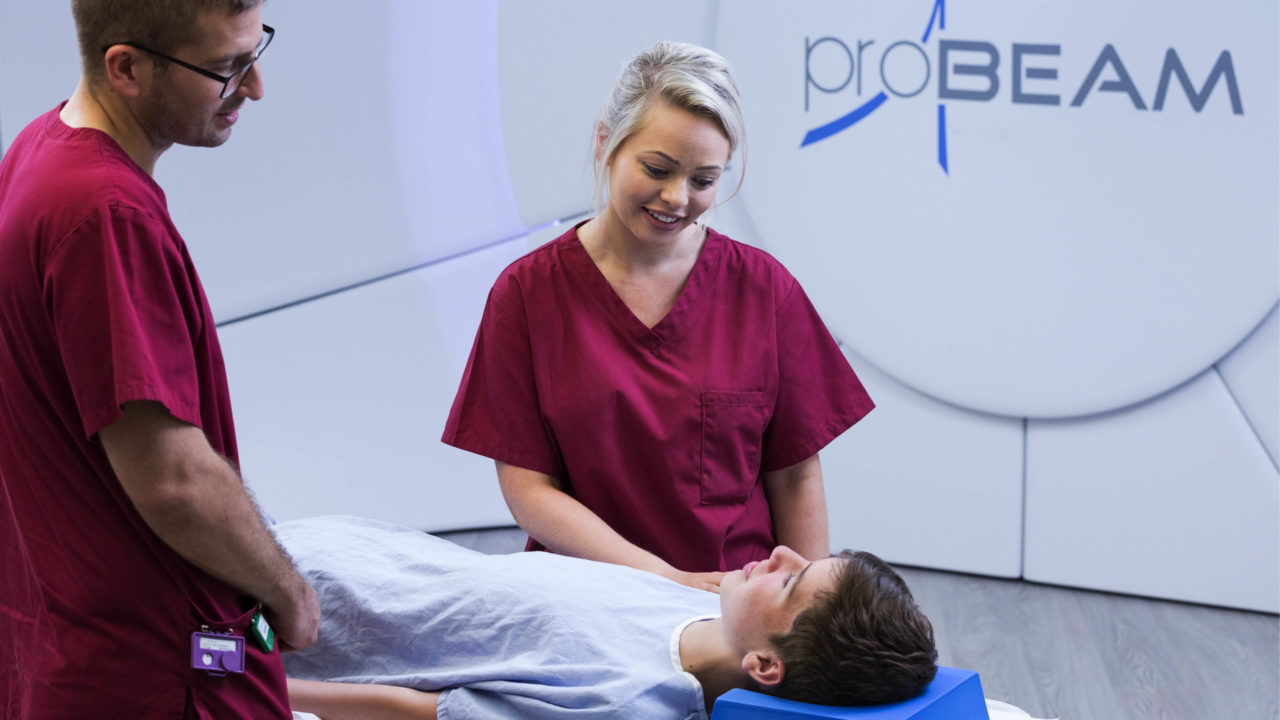 The sight of a 90-tonne piece of equipment being craned into a Manchester hospital represented a landmark moment for cancer treatment in the UK.

It took another 18 months before it became operational, but the cyclotron – the functional heart of proton beam therapy – has now helped cure more than 100 patients who had faced uncertain futures.

The £125-million unit at The Christie Hospital, which offers precision treatment for a range of rare cancers, is a major advance for patients who faced a bleak future or had to seek treatment abroad.

The cyclotron is a particle accelerator. It powers a high-energy beam of protons that target tumours to sub-milimetre accuracy, which allows clinicians to tackle growths in the brain, head and neck, spine and pelvis that were previously difficult to approach.

The beam delivers its curative dose to the tumour alone, sparing some of the flesh that might be impacted by standard x-ray radiotherapy, which tracks through healthy tissue as well as the target site.

The Christie is aiming to treat 650 to 750 patients a year and this capacity will be doubled when a mirror unit is opened at University College Hospital, London next year.

“Since 2008, the UK has been sending patients abroad. There was a recognition that this was expensive and some patients couldn’t access

services abroad because they were unwell, the timings were very tight or circumstances, such as with work and visa requirements, meant they couldn’t travel. Having this service in the UK is excellent news for patients,” says Dr Ed Smith, clinical director of proton beam therapy in Manchester.

Radiotherapy, along with chemotherapy and surgery, is a standard and effective approach to cancer treatment, deploying x-rays to destroy tumours. But the x-rays have to pass through the body and can impact healthy tissue as they exit while proton beams are more active when they reach the tumour site.

“Proton beam therapy means we can reach previously hard-to-treat tumours near the brainstem or spinal cord, as well as reducing side effects in the short and long term,” says Dr Smith.

The cyclotron works by spinning hydrogen protons at up to two thirds the speed of light before siphoning them off into an invisible beam, which is directed by sophisticated magnets. The beam is manipulated via a gantry that can wheel 360 degrees around a patient on a table, to treat the exact shape and depth of the tumour, which has been previously measured and defined by MRI and CT scans.

The excitement of successful treatments, which take a similar time to radiotherapy, resonates around grateful families, but the unit is also playing a crucial role in gathering outcomes from treatment and research into extending its application to other tumour profiles.

“The performance and results so far have been excellent, but we want to go further,” says Dr Smith, a clinical oncologist. “Around 40 per cent of our capacity is dedicated to clinical trials when we can explore its potential impact on other cancers where the evidence is not that robust at the moment.

“There are a number of exciting trials coming over the next five years that will look at the role of protons in certain cancers.”

A team from the University of Manchester is also based at The Christie pursuing pre-clinical research on imaging and how protons react with the body to look at ways of improving therapy delivery.

The landmark TORPEdO trial, which examines its potential for oropharyngeal cancer patients, is due to start in December. Funded by Cancer Research UK and the Taylor Family Foundation, it will look at patient-reported toxicities, quality of life and cost effectiveness of proton beam therapy compared with standard treatment.

Standard radiation procedures have evolved over the years, but proton beam therapy offers greater precision and fewer potential side effects in some cancers. Currently, it is mainly used for childhood cancers and tumours that develop in the head and neck or close to the spinal column and in other sensitive organs.

An NHS policy document on proton beam therapy underscored its benefit: “One third of survivors of childhood cancer report severe or life-threatening complications up to 30 years after the diagnosis of cancer. This can be due to side effects of cancer treatment and radiotherapy is a significant contributing factor.”

Proton beam therapy is particularly effective in treating children and teenagers where any residual damage from radiotherapy could lead to developmental delays, hormonal deficiencies, and issues with bone and muscle growth.

The precision control of proton beams means healthy tissue is spared any contact with x-rays, which helps minimise short-term and long-term side effects.

Treating head and neck carcinomas requires high doses of radiotherapy to sensitive areas such as the front of the brain, base of the skull, mouth and facial bones, and research has shown patients experience less exposure to radiation with proton beam therapy compared with standard radiotherapy.

Tumours that develop close to the spinal cord are difficult to reach, but proton beam therapy is extending clinicians’ ability to treat these accurately, reducing the jeopardy of secondary tissue damage.

By the end of 2020, the need to send patients abroad will have ceased and experts believe research will extend the treatment to other cancers over the next decade.