Has work left the building?

Office design expert Monica Parker laughs and says: “We do not need any more playground slides in the workplace. The slide works for Google because it fits Google’s image, but too many companies are designing for a generation they think they want to attract and avoiding the essence of who they actually are.”

Workplace design is often the first thing companies turn to when they want to make big changes. We look to Google’s slides, Innocent’s grassy floors and Red Bull’s ping-pong tables for inspiration. We’re told that sleeping pods will be the answer to our productivity woes. 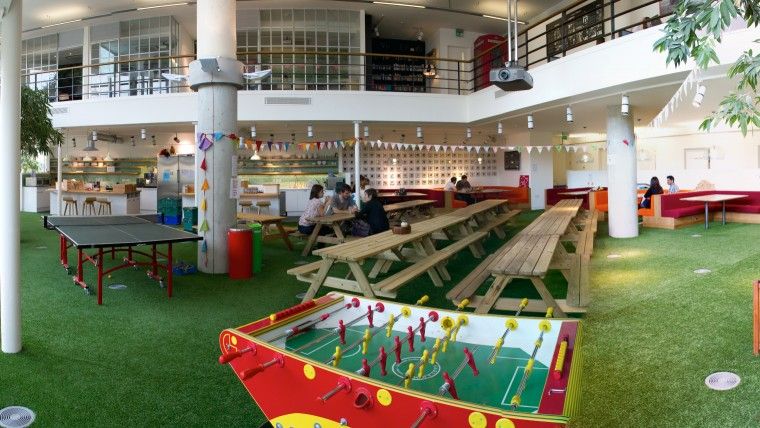 “Although the intention, almost always, is for the workspace to be physically appealing for the end-users, a ‘cool’ workplace for one organisation may appear as ‘gimmicky’ for another,” warns Sam Sahni, senior associate at office interior design, fit-out and refurbishment specialist Morgan Lovell. “Our designers work along with clients to develop a workspace brief that explores the definition of ‘cool’ that is actually relevant for the specific organisation.”

Morgan Lovell has worked a number of “cool” new workplace designs, including Nuffield Health’s new offices in Epsom. Innovations here included a front-of-house juice bar, ad-hoc meeting areas and contemplation areas. It’s also created activity-based workspaces for SAS Software, delivering an experience corridor and innovation hub, as well as floating walls, which “float” on glass and create an illusion of space without feeling too open plan. Perhaps the most modern and inspired feature is the mood lighting, which can be altered to reflect clients’ own colour scheme.

However, these innovations are always made with company culture in mind first. “We often observe that comfortable and great-looking breakout spaces in an open-plan office are highly underused. After a detailed engagement with the workforce, we might discover that underuse of such spaces is a result of cultural elements such as, ‘I need to be at my desk to be seen to be working’,” says Mr Sahni.

We are beginning to see a wide recognition of the fact that work is something that you do, not go to

“Staff often fear that, if they aren’t at their desk, they may be perceived to by skiving. This is a perfect example where just a cool physical element doesn’t work and cultural elements may have to be explored further.”

Ms Parker agrees that before you think about any sort of workplace design, you need to research the culture. “A lot of well-meaning execs think they know their company and culture, but like any other process, you have to have an evidence base.” She suggests using a workplace analytics tool, such as HATCH, which uses a predictive behaviour algorithm to determine what employees like and don’t like in their workplace, and collects vital cultural clues. “Things like this can’t be spoofed,” she says. “Even focus groups can be hijacked by our own biases.”

Nonetheless, says Ms Parker, there are still evident physical trends at play. “There continues to be a pressure on the cost of real estate and a greater emphasis on how people work, not where,” she says. This means we are starting to question the purpose of the office and whether it needs to perform in the way it has. This has resulted in shrinking footprints and spaces where people are highly collaborative and can work in a dynamic way. Therefore, the latest designs, she says, tend to be more “agile” and responsive to work needs.

There’s also an adoption of the idea that traditional open-plan settings can be difficult for a lot of people, and so there’s a move towards more activity-based settings and allowing people to make a workspace their own.

Mr Sahni adds: “In the majority of cases, work has left the building. We are beginning to see a wide recognition of the fact that work is something that you do, not go to. With this in mind, the traditional office is beginning to lose its monopoly as prime physical infrastructure for an organisation. Having said that, we don’t think that the ‘office’ will be obsolete. We believe the workplace will become a centre for virtual and face-to-face interaction and will be designed primarily around patterns of human interaction.

“We often use the word ‘workplace’ as experts. This is different to ‘workspace’ which only refers to the physical environment. Workplace refers to the intersectional experience that includes culture and behaviours or people factors, processes or the way of conducting business, physical environment or the office, and tools and technologies available for the workforce to do their core job. In order for an office to be cool, factors such as organisational culture and technology cannot be overlooked.”

Future of Work
Sustainable, sociable and healthy: breaking down Gen Z’s workplace checklist
Digital Transformation
Why the skills gap is stopping businesses from achieving agility
Future of Work
Three workforce strategies for weathering uncertainty
Future of Work
How voice communication can humanise hybrid working
Future of Work
2022 in review – the new world of work
Future of Work
Why Mindvalley’s CEO is ‘tearing down’ the office