What it’s like to live and work in Dublin

With many large organisations relocating their European headquarters to the Irish capital, what can expats expect when moving to Dublin?
Sam Forsdick

Dublin is a popular choice among major organisations for their European headquarters and that makes it a likely destination for internationals to live and work.

The Irish capital was recently judged the most popular location for financial services firms to locate their EU offices. Figures from EY show that 36 financial services companies have announced their intention to relocate UK operations and/or staff to Dublin, since the Brexit referendum.

It is also home to the European headquarters of some of the largest global technology companies, including Microsoft, Google and Meta. The fast-growing social media app TikTok is the latest to join, signing a long-term lease to rent 210,000sq ft of office space in the city’s south docklands.

Why are companies moving to the Irish capital?

One of the most important factors driving companies to Dublin is Ireland’s business-friendly tax regime.

Corporation tax in the country stands at 12.5%, placing it among the lowest corporate tax rates in Europe. This compares favourably with its closest neighbour, the UK, which has a corporation tax rate of 19%. Companies based in Ireland can also benefit from a 25% tax credit on research and development.

As a tech hub Ireland has a wealth of talent, which helps it to punch above its weight when attracting companies such as LinkedIn and Apple to its shores. Enterprise Ireland estimates that the country has 80,000 tech professionals working in the industry, with Dublin’s Silicon Docks at the centre of the Irish technology sector.

Software company Salesforce opened its first offices in Dublin in 2001 and currently employs around 3,000 people there. Salesforce Tower Dublin, a new campus on the river Liffey, is scheduled to open later this year.

Explaining why Salesforce has such a large presence in Dublin, its senior director for employee success, Terri Moloney, says: “It has a strong reputation as the digital capital of Europe and the city is home to 16 of the top 20 global tech companies in the world. It attracts a lot of international talent and that makes the talent market dynamic; it’s certainly one of the top reasons businesses locate here.”

What to expect when moving to Dublin

In common with other companies, Salesforce provides services and support to help employees with their relocation. And while a common concern is being able to speak the language of the target country, Moloney has good news on this point too: “There are 60 different nationalities in our offices and many different languages are spoken. You don’t have to have English, you can manage with limited language skills,” she says.

Dublin has a reputation as a welcoming city. According to the InterNations Expat Insider 2021 report, which surveys international citizens living in cities across the world, Dublin ranks sixth for local friendliness and 13th for ease of settling.

Philip Kelly is employee engagement and communications lead at Irish energy firm ESB. He has lived in Dublin since 2010, and lived and worked in Cork, Sydney and Swansea across his career. “My favourite thing about Dublin is probably the people,” he says. “It’s a fun city and everyone’s very friendly, which makes it very easy to meet new people.”

He adds that this social element is present across the city, with a culture that caters to all tastes, from quiet pubs to vibrant clubs, theatre, shopping and restaurants.

Moloney adds that there is a “small neighbourhood feel in the city, which is really attractive. It’s a pretty safe country, it’s very much a cultural centre and there are a lot of international people here. This makes it easy for a lot of people to come and live here.”

How Dublin work life has been affected by the pandemic

The Irish capital ranks third for work-life balance and first for local career prospects and job security, according to the InterNations survey.

Speaking about his own company, Kelly says: “We work hard and everyone’s professional and tries to uphold the values of ESB but we have a social element as well.”

In this sense, he believes Dublin workers can strike a good balance. “Work is not the be all and end all,” he adds. “Rarely will you go to a party where people ask you what you do for a living. People put a lot into their work but it’s rarely their defining characteristic.”

The importance of this work-life balance was emphasised during the pandemic too and many offices have continued with hybrid working arrangements. Moloney says: “The hybrid working model has proven to be very positive and is focused on the employee experience. When you do come into the office, it’s about getting together with other team members or attending events.”

This social element of work is something that has made a welcome return now that Covid restrictions have been lifted. “Business is done in our coffee docks as much as in our boardrooms,” Kelly adds. “It’s something that we’ve been missing during the pandemic – it’s hard to schedule a virtual call for a chat. People missed those human interactions, and I think that’s what we’re getting back to now.”

Is it expensive to live in Dublin?

Dublin is among the most expensive cities to live in the world, coming joint 19th in the Economist Intelligence Unit’s Worldwide Cost of Living index, alongside Frankfurt and Shanghai. This places the Irish capital just below London when comparing the costs of goods and services in each city.

This fact isn’t lost on expats, with 93% of Dublin-based internationals listing ‘expensive’ as the main characteristic of the city, according to Dublin’s Global Reputation report by the Dublin Chamber.

This is reflected in the Expat Insider 2021 report, in which Dublin came last for finance and housing for the fourth year running, mostly because of high housing costs and the local cost of living. 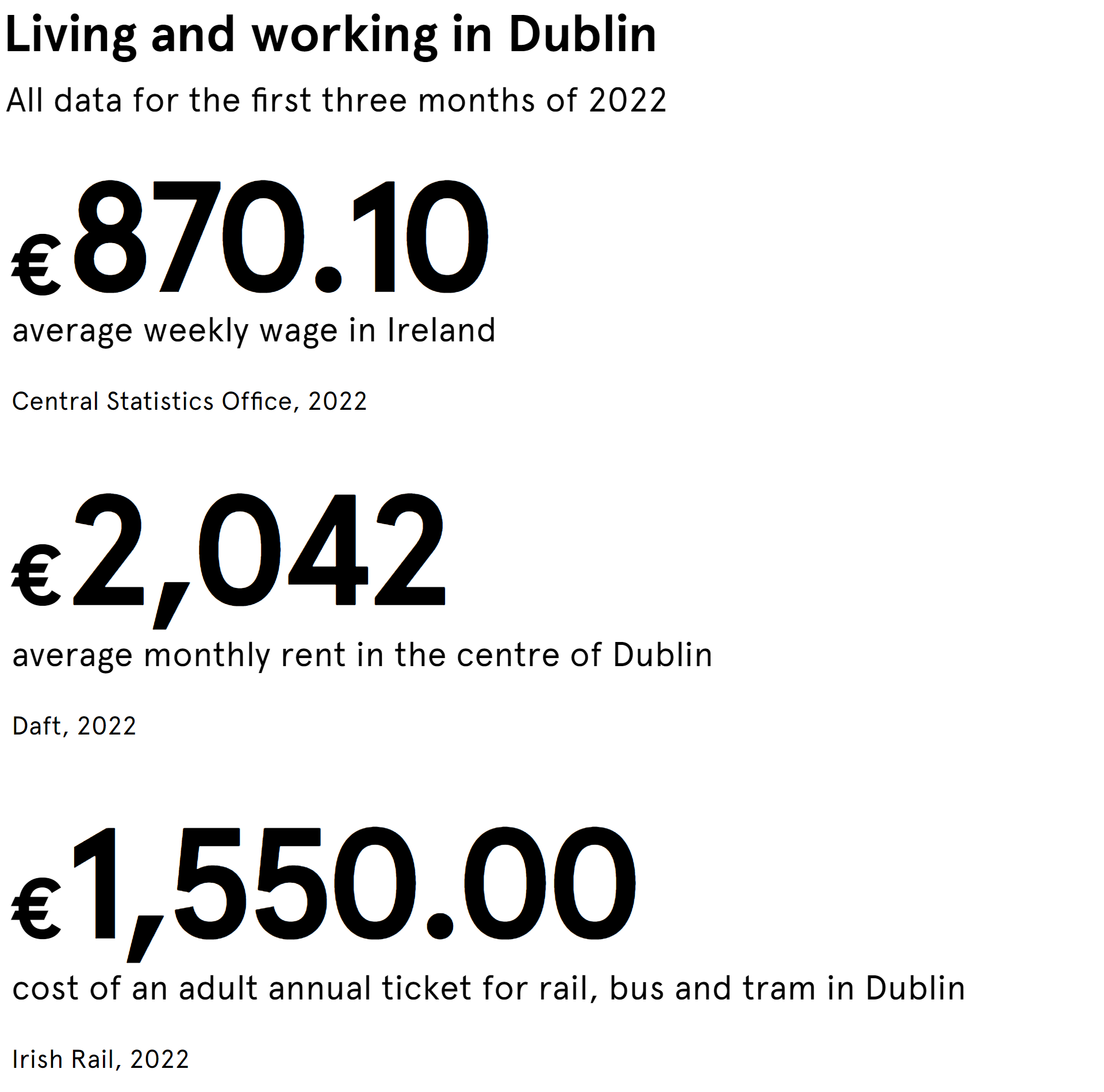 The Dublin Chamber report lists housing as one of the priorities for local government to address to improve the capital city’s global reputation. In the same report, it says: “The dysfunctional housing market in this city is creating a negative impression both here and abroad. Until more housing supply becomes available in the city, it will continue to impact on the quality of life of its residents and workers, and on Dublin’s international reputation as a place to invest and live.”

The chamber suggests an increased housing supply would be one of the main solutions to the problem. But with 18,630 residential units beginning construction in Dublin and its commuter towns last year – the most in any year since 2006, according to the Banking and Payment Federation Ireland – this problem is looking to be addressed.

Kelly adds: “For people who first move to Dublin, they can be sidetracked by the tourist traps and often end up eating in the most expensive places or drinking at the most expensive bars. Dublin is a city that unveils itself slowly to people and it takes some time to find the hidden gems.

“It isn’t all about the Temple Bar. There’s a whole lot more that Dublin has to offer.”

You can read more from our Working Around the World series here.

Global BusinessEuropeWorking around the world