Franchising can be the best way to expand your brand abroad, even if you don’t franchise in the UK

Here’s a starter for ten: how much money does UK plc make from its overseas franchise operations? Good question, right? Curiously, that’s precisely what the authority on the subject, the British Franchise Association (bfa), said when I asked them. Someone should find out, they suggested.

Fortunately, what the bfa did confirm is that fully 340 brands – 38 per cent of the total that operate franchise models in the UK – also franchise abroad. But that’s just icing on the cake.

“There are some really big names here that don’t franchise domestically but franchise overseas, such as Debenhams, F&F and French Connection,” says the bfa’s Paul Stafford. “It’s seen as a very good expansion model overseas.”

A glance at the Debenhams website will tell you that it has 68 franchised stores in 25 countries worldwide, including Armenia, Pakistan and Malaysia. This compares to the 178 owned stores in the UK, Ireland and Denmark.

Tesco’s clothes brand F&F, meanwhile, operates franchised operations in 15 countries and opened its 100th franchised outlet last year in Iceland where it now has five franchised stores. That’s since launching the approach in 2012 when it declared: “The franchising model enables Tesco to accelerate the growth of its F&F brand on a much wider scale.” Every little helps, as they say.

So lots of very well-known companies across the UK are going international using the franchise route and quietly drawing revenues that surely run to the billions. 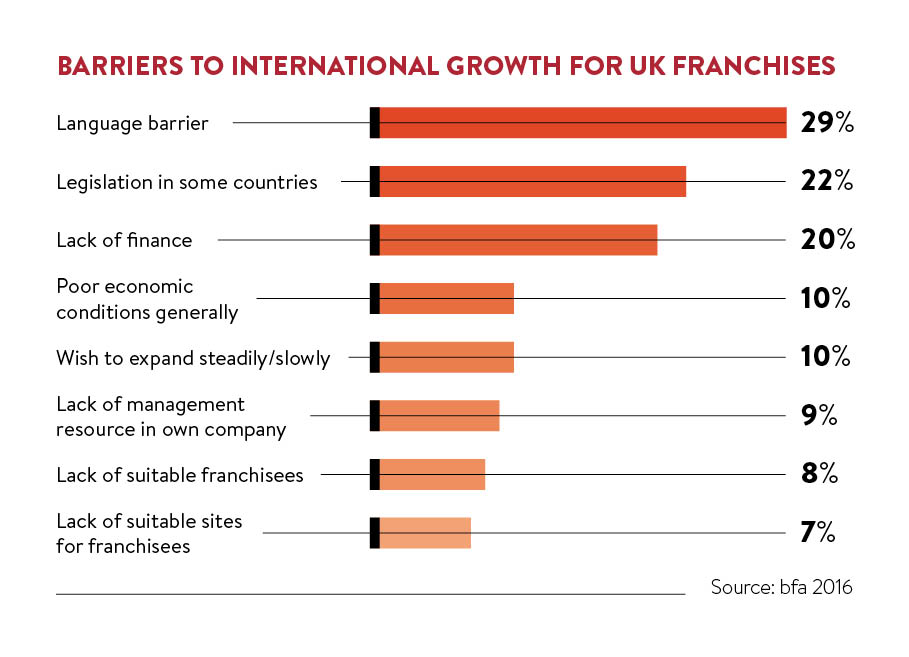 “Depending on how the finances and structure are put together, it’s possible that some companies could be earning more from overseas franchise outlets than they do from their domestic operations,” says franchise consultant Brian Duckett, who has been in the business for 40 years. “I certainly know of one or two big high street names where that’s the case.”

And they choose a franchising model over going it alone or joint ventures because it’s simply a safer bet. “The traditional benefits of franchising are that you’re using somebody else’s money and expertise – local knowledge – to grow a business in that market,” he says.

For Joel Vertes, head of franchising and licensing at law firm Olswang, the franchise model often offers the logical choice for players looking to broaden their horizons overseas.

“Franchising is the best model because of the ease in which it facilitates control over your brand, and the usage of your brand and your concept in the local territory, aligned with the benefits you get from having a reputable local partner, who both takes the administrative burden and liability, and can advise you on cultural fit,” says Mr Vertes, who has advised luxury fashion names Thomas Pink and Austin Reed as well as the restaurant brand Hakkasan on international franchising. “It’s a no-brainer,” he says. “You can see why it’s becoming such a popular model.”

Mr Vertes reports that his firm’s Singapore office sees a lot of UK businesses operating in South-East Asia this way, adding: “The world is becoming smaller, people see China and places like South Korea, Indonesia and Malaysia as being really accessible, viable markets.”

One well-known British company that has recently embraced the franchising route to access these viable markets is the high street shoe brand Dune International. It now has 80 franchised outlets in 14 countries, including India, the Middle East, Baltic States, South Africa and Philippines, contributing to around 12 per cent of the company’s turnover. Most of these were added during the last three years.

“From a strategic point of view, it’s a key focus of our business,” says Dune’s international franchise and wholesale director Ben Jobling, speaking from Dubai where he’s presenting the new season product range to franchise store managers. “Critical to our strategy is making sure that the people we work with understand what we are trying to achieve and the brand experience, whether it’s in Delhi, Dubai or London, because at the end of the day it’s our name above the door.”

Since Dune began franchising overseas 14 years ago, the growth of social media has made the need for conformity and engagement all the greater across the businesses. As Mr Jobling explains: “We’re not at arm’s length; we’re absolutely involved in the running of our stores in each of the markets we operate.”

This means achieving a 50-50 balance in terms of the relationship and recognising that both partners need each other to make the business successful.

So why has Dune overwhelmingly favoured the franchise approach over going it alone, which it has done with two stores in the United States, or via a joint venture, as it has in Switzerland? “We recognised that we’re the experts in the brand,” says Mr Jobling. But if you want to open shops in India, he asks: “Which real estate agent do you speak to? Where are the best locations in the city? I think it’s recognising that some markets are more challenging.”

Then there are legal constraints; in many foreign markets it’s not permitted to have a wholly owned subsidiary so sole ownership is not on the table. That leaves you with the choice between franchising and joint venture. Here Mr Vertes from Olswang has some words of advice. “Joint ventures can work, but what happens if the business isn’t doing well financially or if somehow the brand experience that your local partner is delivering on the ground isn’t to your standard? Extricating yourself from a joint venture arrangement is really much harder because it’s not a vertical relationship with you as a franchisor and a franchisee below you; it’s a much more parallel, reciprocal relationship, therefore your negotiating position is weaker, potentially,” he says.

Which is all food for thought. For franchise expert Mr Duckett though, the most important way to get international franchising right is to spend enough time making sure you have the right franchise partner. “You can write a book about that,” he cautions. “If you pick the wrong partner, it won’t work.”

Someone who has written a book on the subject, Susan-Ann Hills, author of The Franchise Revolution, advises would-be international franchisors to consider appointing a single individual as master franchisee in a given overseas territory. That’s someone who will grow the franchise in that area and report to you direct. They’ll also be able to give you input to finesse the business model as required. “It reduces the headache factor massively and in my opinion is the best way to go by far,” she says.

And for Dune’s Mr Jobling, partnership is the name of the game. He says that if he can find the right partner, there’s no limit to where Dune will take the franchise model. So how does he go about finding that all-important partner, someone he can trust with his treasured brand?

“One of the first things I always do is meet them in the stores and I ask them for their impression of us,” he says. “If they pick up on some of the subtle things that we do, that’s encouraging because they’re already getting to grips with what we’re trying to achieve.”

The company, Mr Jobling explains, aims to deliver “the Dune experience” in its outlets. “You might not notice this as a customer, but people who really engage with what retail theatre is all about will always spot these things and it’s that coming together of like minds which is really important for me in order to start the relationship.”