For more than three years, British business has faced creeping uncertainty as planned departure dates to exit the European Union pass by, the type of departure fluctuates and predicted outcomes shift. Since June 23, 2016 the only element that company leaders have been able to count on in terms of Brexit and business
is ambiguity.

The impact of Brexit on UK businesses across industry sectors has resulted in significant costs due to contingency planning. For larger companies with greater resources, they have been able to plan earlier and for a longer disruption. In contrast, smaller companies with fewer resources cannot benefit from
such flexibility.

But as Mats Persson, Brexit strategy leader at EY, says: “The question is how much cash do you want to potentially invest in an outcome that may not materialise? For the vast majority of companies, full mitigation would be uneconomical and would not be justifiable relative to all the other priorities they have to deal with.”

With that in mind, business decision-makers have had to focus on the issues they can control. The most typical types of mitigating actions to do with Brexit and business fall into the following categories:

Preparing for a customs border

For the first time since the 1970s, it looks increasingly likely there will be a customs border between the UK and the rest of Europe. Business leaders must ensure they have basic capacity to trade across borders. This involves hiring customs experts who know how to fill out a customs declaration form accurately, understand the right classification of products and can implement systems to pay the right tariff as well as knowing what the right tariff will be.

Mapping out the supply chain to make sure it can keep operating despite Brexit is something all businesses can and should do. Finding local suppliers may help some businesses, but switching suppliers, particularly for a strategic supplier, won’t always solve the problem.

“You can’t control everything in your supply chain, so you just have to figure out what are the moving parts that really matter and that you actually have some control over,” Mr Persson says.

The emphasis should be on critical suppliers that supply core components or ingredients without which the business would cease to operate. Working closely with suppliers to find solutions that work for both parties is essential.

Stockpiling is an option for some, but many smaller companies will not have the facilities or cash to store extra stock and those with perishable goods simply won’t be able to. It is ultimately a short-term fix. If there is a further delay, many businesses may skip this option next time because the costs are not insignificant.

Companies in sectors that rely on a single licence or approval to trade should ensure it is UK originated and valid for transfer to all EU member states so the business can continue to trade in Europe. The most typical licence will be the financial services passport. Again, the costs are significant, but without a licence to operate, the business will face greater costs in loss of trade and possibly reputational damage.

Freedom of movement will end on October 31 when, and if, the UK leaves the EU. The UK has nearly full employment, so recruitment will be tougher. Latest data published in June from the Office for National Statistics estimates the UK employment rate at 76.1 per cent, higher than a year earlier and the joint-highest on record. Companies should have already reviewed their workforce to understand staffing and training requirements in regard to Brexit and business. For EU nationals in the workforce, discussing the settled status option early on will help calm any concerns about the future both for employees and the employer. 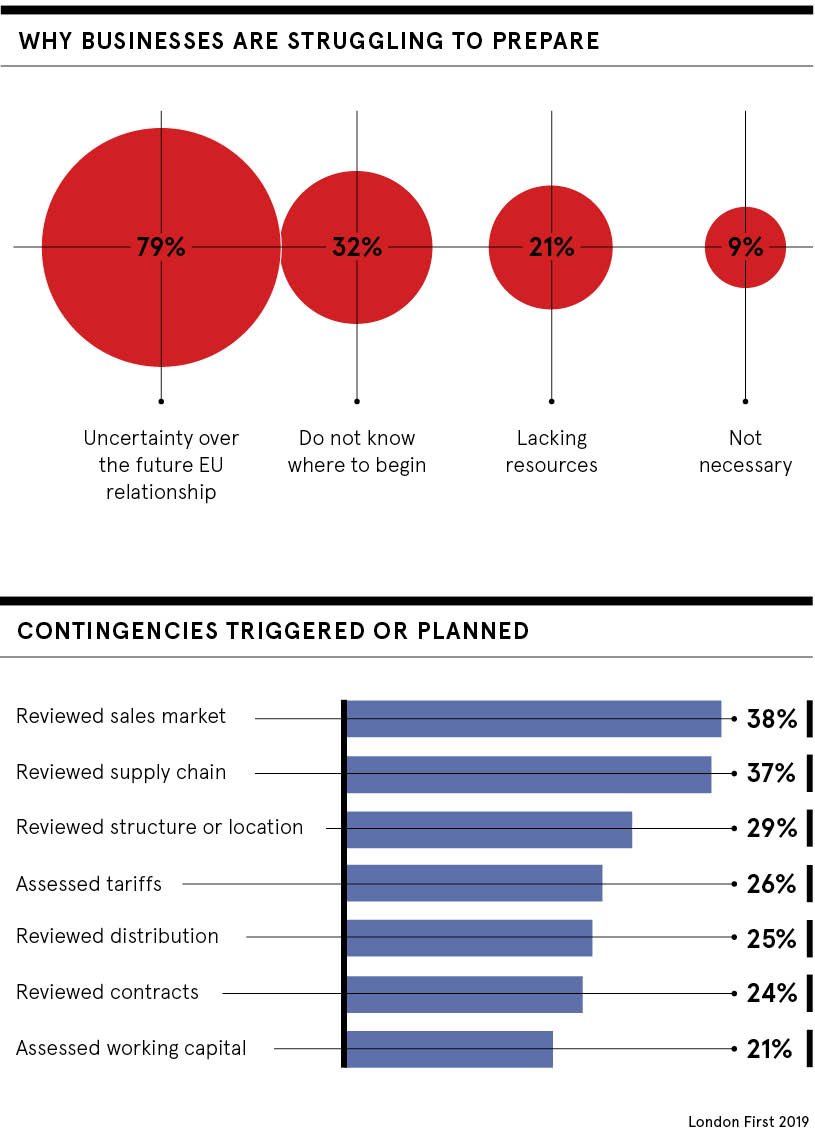 Currently, October 31 is the next scheduled date for the UK to leave the EU. Based on past experience, this date could shift again. Company leaders, despite the best efforts of business lobby groups, cannot control, or even know definitively, what date the UK will leave the EU.

Businesses can’t control when Brexit actually happens, which can make big decision-making on any costly contingency or relocation risky for smaller companies. “This is also a big issue for multiple rounds of stockpiling. Many organisations cannot and don’t want to keep doing this unnecessarily as it eats into their margins,” says Allie Renison, head of EU and trade policy at the Institute
of Directors.

We have already had some experience of the delicate balance in infrastructure post-Brexit when earlier this year the government was forced to cancel a controversial no-deal Brexit ferry contract awarded to a company with no ships. Ports’ ability to handle trade once we leave the EU is out of companies’ hands.

“Companies can have the best supplier readiness plan in the world, but if the port or roads aren’t ready, there is only so much they can do,” Mr Persson says.

Companies can have a supplier readiness plan, but if the port or roads aren’t ready, there is only so much they can do

Even if the UK leaves the EU as planned on October 31, uncertainty prevails over how we will leave, possibly a chaotic departure with World Trade Organization rules or Brexit with a customs union. Question marks continue to hang over
how businesses would even trade within the British Isles given politicians’ failure to resolve the Irish backstop issue.

Also unknown is how long a no deal would last, how quickly mitigations being put in place by the UK and the EU will last, and how badly any breakdown in UK-EU relations as a result of a no deal will continue to affect terms of trade.

“This also makes judging how much the UK could unilaterally do to cut any burdensome EU regulations or changing tariffs difficult, since any changes would affect our starting point of (re)negotiation with the EU and our access to its market,” says Ms Renison.

To minimise the anxiety of uncertainty prevailing in the current climate concerning Brexit and business, companies with the available capacity are eschewing the wait-and-see approach and embracing the chance to expand overseas. With the prospect of no deal ever closer, businesses are looking at setting up additional operations in locations such
as the Republic of Ireland or mainland Europe.

London-based boutique investment manager TAM Asset Management set up a second office in Spain so it can continue operating in the EU. “We are in a good position to be ready come October if there’s a no-deal Brexit to operate within Europe with our
own European-regulated entity,” says TAM chief financial officer John Gracey.

Where Brexit and business are concerned the current mood is to leave nothing to chance.