Every chief executive in the land trots out the phrase “people are our biggest asset”. It should mean that HR – human resources – is the most important function in a company, way before finance or operations, but that’s clearly not the case for many businesses. Will the future be any different?

“HR is changing in a very exciting way,” says Chantal Free, managing director, head of human capital and benefits at Willis Towers Watson, a global business consultancy. “Businesses are massively disrupted; whether you look at timescales, business models or people, the whole ecosystem of how work is done is changing. HR will rule in this new world.”

A shift in perceptions

Change is happening on all sides. The makeup of the workforce is changing – not only an older workforce, but one with different expectations of what work means; 20 and 30-something millennials, for example, are looking for more than just a monthly pay cheque.

“It’s not something HR has got its head around yet,” says Jane Chesters, partner at Orion Partners, a talent, leadership and HR consultancy. “But there has been a shift in how people perceive work; they are not looking for a traditional career path.

“There also has to be a fundamental redesign of a lot of HR processes. Look around you when you step on a bus or a train in the morning; everyone is looking at their smartphone. That’s how people communicate, that’s how they access services. Yet when they walk through the office doors, we communicate with them in an old-fashioned way.”

Understanding how people operate is key to HR success, but nowadays it takes more than a tired annual performance review to motivate talented staff, who are knowledgeable about competitor companies and looking for new challenges and roles.

Being able to help business transform and become more agile is key to the future of HR but, according to a just-published survey from Orion, few HR professionals feel it is happening. The survey found that 52 per cent of HR transformation programmes were still focusing on HR operations, with less emphasis on strategic capabilities. 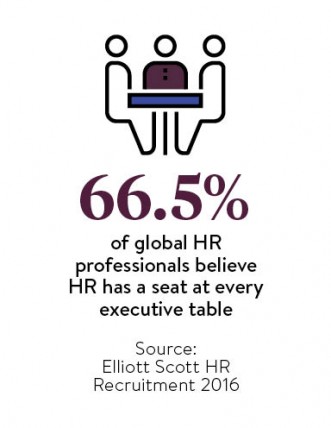 “HR should not be sole owner of the challenges as they are business challenges,” the report concludes. “Creating and driving shared ownership of the people agenda is the trick that HR has still to pull off.”

Technology will change the delivery of HR, but it will also require a huge upskilling of the function. “It gives HR a lot more real-time data that can detect behaviour and provide insights very quickly,” says Ms Free. “The power of analytics is huge and can give incredible insights into the business impact of a decision. But it’s about having the skills to look at data in aggregate, not just seeing turnover or salary data separately.”

Nor is this necessarily about spending more as many companies already have the information. According to an IBM report, Building a #Smarter Workforce, the average HR department has 18 different HR applications that aren’t plugged in to anything central and aren’t communicating, making it impossible to use the data available.

Best-in-class companies are 3.7 times more likely to train for analytics skills, according to a 2014 Aberdeen/IBM study, and there are clear rewards for using them, says Duncan Brown, head of HR consultancy at the Institute for Employment Studies, an independent centre for HR research.

“Google’s HR department is very heavily analytical; they don’t do anything unless there is the evidence to back it up,” he says. “In a knowledge and service-based economy, people are where it’s at – look at what Microsoft was prepared to pay for LinkedIn [$26.2 billion].”

But he warns against trying to cut and paste from one company to another. “One of the problems with HR is it has a concept of ‘best practice’. But being clear about the appropriate people management model depends on the philosophy and values of the business,” he says.

So, for example, you can borrow the often-cited partnership model of department store John Lewis, but unless you replicate the culture of the business, it won’t work in the same way. HR should be playing a leading role fashioning corporate culture, but it has not always been willing to do so.

“In the immediate term, we are seeing corporate scandals attributable to culture or leadership,” says Laura Harrison, people and strategy director at the Chartered Institute for Personnel and Development, pointing to companies such as Sports Direct, which has been criticised for its treatment of staff. “We are seeing the corporate costs of getting staffing wrong.”

She also believes HR is entering a new phase. “In order to get the voice it needed, HR historically sought to show its commerciality. But commerciality is not everything. There has been a re-engagement with the human side of HR, which is uniquely placed as the expert on human beings; it’s the ability to extract the best from people that unlocks value for a business,” says Ms Harrison.

“People have become shy about asserting the human agenda, but the best organisations refuse to commercialise their human beings. HR should be playing a challenging role, helping the business to define its principles. Our role as professionals is to stand up for ethical values.”